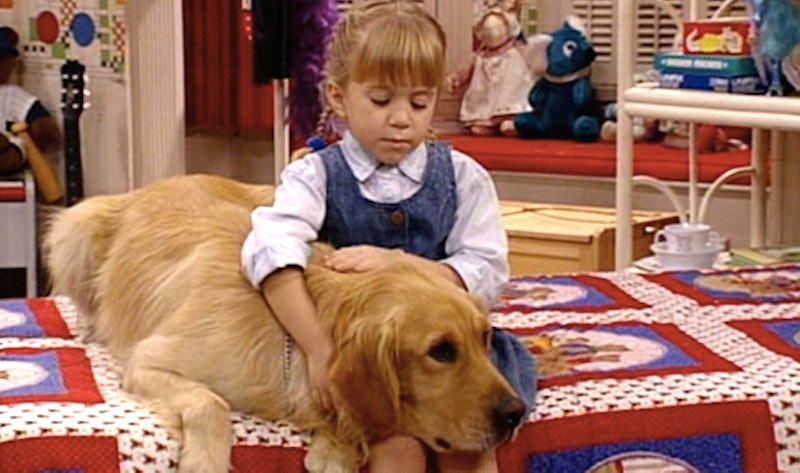 I don't care if it's weird: My favorite Full House character was Comet. Yes, Comet the dog. Just hear me out before you judge, OK? The reason I love the pup so much is simple: Comet was not only an integral member of the Tanner family, but he was also a constant source of cuteness. This is a dog who had to play opposite not one, but two sets (yes, I'm counting Mary-Kate and Ashley Olsen) of adorable twins, and he held his own against both. It takes major doggie acting chops to pull off a coup like that. He also had a way of stealing scenes right out from under his human partners with a well-timed trick. The only reason he doesn't get more love is because poor Comet was simply unappreciated with all these wonderful characters surrounding him.

Comet was a confidante to Tanners, big and small. Loyal, patient, and hilarious, this pup was everything you could possibly want out of a family pet and more. Yes, Michelle was adorable; Uncle Jesse was crushworthy; D.J. was the big sister we all wanted; and Uncle Joey told the best jokes — but there's really no point in debating this. Comet Full House's dark horse.

Not convinced the Tanner family's four-legged friend was an essential part of what made Full House so great? Then allow me to present you with some solid evidence.

1. His Love For Food Led To Epic Bits

Right from the start, Comet loved food, and his love was a constant recipe for hilarity. Case-in-point: Stephanie feeds Michelle's ice cream to Comet, leading to Michelle getting to be extra adorable when she says, "Hey! The doggie ate my ouce cream."

2. His Reaction Shots Were Legendary

No one pulled off a reaction shot as perfectly as this dog did. Any time Full House needed a quick laugh, all they had to do was cut to that little, Golden Retriever face reacting to a Tanner. My personal favorite Comet reaction shot will always be his quick glance away when Stephanie asked for his opinion on her new glasses. He was not impressed.

Comet was born in Uncle Jesse's bed, so is it any wonder he was so attached to everyone's favorite uncle? The trusty Tanner pup's appreciation of Uncle Jesse paired with his ability to drive Uncle Jesse crazy were just two more reasons this furry guy was my everything.

Comet was always smarter than your average dog, but it was particularly awesome to watch him outsmart Danny. When Stephanie threw the dog a birthday party, Danny was certain Comet couldn't blow out his candle. Guess who was wrong? (If you guessed Danny, you get a gold star.)

5. He Let the Family Use Him As A Prop

This guy had endless patience. He let the family get away with putting hats on him, forcing him to do tricks, and using him as a prop to amuse themselves when they got bored. Once, Uncle Jesse made Comet "sing" an Elvis song. Did Comet complain? Nope.

6. His Solo Episode Was A Blast

In the Season 7 episode "Comet's Excellent Adventure," Comet got to spend the day roaming around San Francisco on his own. He fell in love, chased a truck with a giant hot dog on it, and generally had a blast adventuring before he heard the pleas of Michelle on the news asking him to come home. Which he did, because Comet was the smartest dog in all the land.

7. He Was Always There When The Tanner Sisters Needed Him

There were times when Danny, Uncle Jesse, Joey, and Aunt Becky couldn't comfort Michelle, D.J., and Stephanie. During those times, Comet was always on hand waiting to give them a big furry hug and a kiss.

Comet was everyone's best friend, and ultimately, it was his loyalty that made him an essential member of the family.