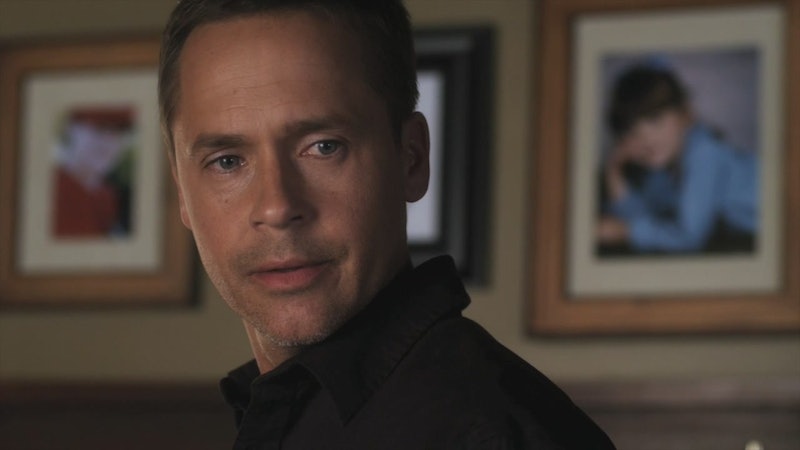 You guys, the Season 6 premiere of Pretty Little Liars is so, so soon I can't handle it. Over the course of the hiatus, I think we’ve exhausted most of our options in discussing who could be related to A (and who A, aka Charles DiLaurentis, really is), but there’s one person notably absent from most of the Pretty Little Liars theories: Byron Montgomery. Is he missing because he, as Aria’s dad, is a perfectly innocent character? Pssht, absolutely not. Byron is far from angelic, and I found a theory that puts him at the center of many a Pretty Little Liars mystery. Tumblr user rosewood-clues is working on the theory that Byron is actually Bethany Young’s father, as well as Aria’s and Mike’s, and they have certainly got my attention with it.

For those of you who got lost on the way here or have been living under a rock, Bethany is the girl whose body was found in the grave that Ali was thought to be buried in. Other than that, all we really know about Bethany is that she was a patient at Radley Sanitarium, but rosewood-clues really goes deep. You want proof? The Tumblr cites the mental health problems that run in Byron’s family (we learned that his brother suffered from some sort of mental illness); Alison’s penchant for blackmailing (perhaps Ali knew about his other daughter?); and Detective Tanner’s hard questioning of Byron, among other things, as evidence.

This theory is pretty golden, I’m not going to lie. Let’s expand on this, shall we? We know already Charles is related to the DiLaurentis family, but I’d like to go so far as to proclaim that Bethany and Charles could be related too. In the finale of Season 5, viewers saw a video of Mrs. DiLaurentis exclaiming to two little boys to “Kiss your sister,” but only one of them does. Everyone assumes that this is Ali, Jason, and Charles, all as siblings, but it doesn’t have to be. And even if the little baby is Ali, the kissing brother is Jason, and the other child is Charles, this doesn't necessarily mean that Charles is fully related to Ali — he could be a half sibling.

We know that Mrs. D. took frequent trips to Radley to visit Bethany when she was locked up there, but what for? Why would you constantly look after a person that wasn't part of your family? The answer: Because she actually was. The theory explains that Mrs. DiLaurentis was Bethany’s mom, and Byron was Bethany’s dad. Charles is Bethany’s twin brother, and they were both locked up in Radley after their parents’ torrid affair and subsequent heartbreak at having to institutionalize their children.

Bethany and Charles are both older than Aria, so it’s not hard to believe that Ella, Aria’s mom and Byron’s ex-wife, would have absolutely no knowledge of this tomfoolery. Mrs. D had an affair before (with Peter Hastings, which resulted in Jason), so I think her husband could turn the other cheek multiple times. If Byron is father to Bethany and Charles, that puts Aria in a weird sort of family love triangle with Jason, a guy she’s fantasized about being shirtless (but haven’t we all fantasized about a shirtless Jason DiLaurentis?).

Is this plausible? I don’t really know. But plenty of things that seemed impossible are slowly coming to life in Rosewood, so I’m open to any ideas. With any luck, the Season 6 premiere will shed a little bit of light on Charles and just where he came from. Until then, I’m keeping my eye on Byron.

More like this
Every Horror Movie Reference In The 'PLL: Original Sin' Premiere
By Alyssa Lapid
The 'PLL: Original Sin' Creators Say A’s Identity Will Be “Very Clear” By The Season Finale
By Alyssa Lapid
Josh Peck Shows Love To Jennette McCurdy After Her Shocking 'iCarly' Revelations
By Radhika Menon
An Ultimate Guide To The Music Of 'Rap Sh!t'
By Brad Witter
Get Even More From Bustle — Sign Up For The Newsletter