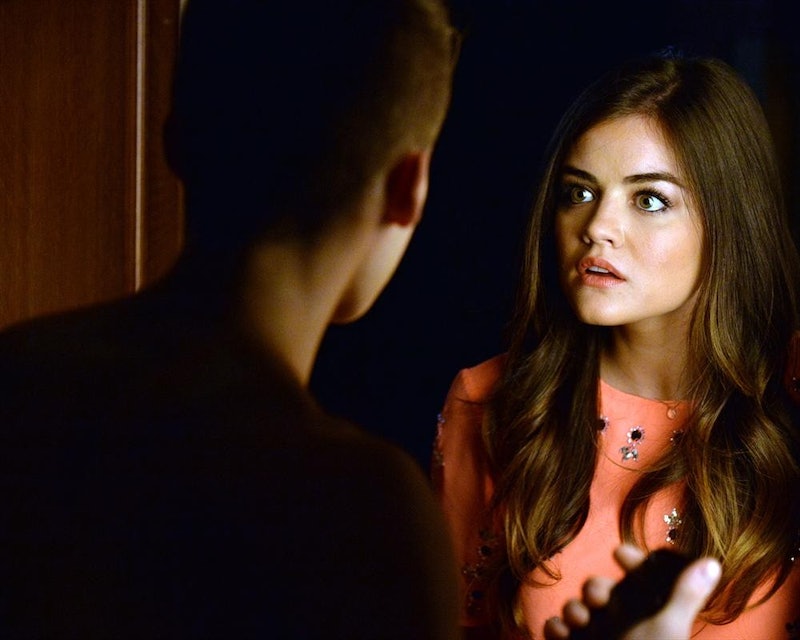 Of all the mysteries in Pretty Little Liars lore (why are they never in school? Where are their parents? How was Toby allowed to drop out and become a police officer?), theories about PLL's Radley Sanitarium loom large in fans' minds. Nearly every character is connected to this mental hospital, from Toby’s mother having been locked up inside to Radley patient Bethany Young murdered (allegedly) by Melissa Hastings. Of course, the people behind Pretty Little Liars are not quite so forthcoming with the answers, but we fans sure have questions. So what’s a PLL super-fan to do? Talk amongst likeminded folks on Tumblr, Reddit, and any Twitter account that will allow it. And let me just say — the Pretty Little Liars theories that fans come up with are certainly advanced. At this point, it's completely valid to start wondering if the writers are dictating the conversation, or if they're just looking to the fans for ideas at this point.

But when it comes to Radley, a lot of these theories involve artsy teacher-lover Aria Montgomery. With her feather earrings and many Beetlejuice-striped outfits, Aria doesn’t exactly seem the type to be the cornerstone of unlocking the mystery of Radley Sanitarium, but there are plenty of Internet theorists who sure think she is. Most of Aria’s storylines are fluffy (as fluffy as statutory rape gets, I suppose) and romantically related to her trysts with Ezra, but I think Aria has a dark side that has yet to be revealed. And I'm not the only one wondering if Aria could be A.

Some signs point to "yes," and those signs are tied to Radley. Remember when Aria volunteered at Radley to drum up some information about Bethany Young, and orderly Eddie Lamb look like he saw a ghost? He mentioned that he was sure he had met Aria before, and Aria immediately denied it and looked mighty nervous.

Why? Well, according to the fan who runs the KillerAriaIsA Tumblr, Aria may have a multiple personality disorder and had been a patient at Radley in her youth. If Aria was a live-in patient when she was younger, of course an orderly would have gotten to know her, thus remembering her only a few years later. Aria would be nervous about being recognized because she doesn’t need her buds to know she was locked up in the loony bin.

Interestingly enough, Radley is dubbed “The Radley” (not Radley Sanitarium, for all of you PLL anagram fans) in the Pretty Little Liars books, and during the course of the series it is shut down and turned into a hotel, because people are just clamoring to sleep inside an old mental hospital (but I digress). Given that Marlene King loves Alfred Hitchcock and bases a lot of PLL plot devices on Hitchcockian lore, does this story of a person with a split-personality disorder who lives in a hotel ring a bell to anyone else?

It’s the plot of Hitchcock’s 1960 thriller Psycho! Another Tumblr called Pretty Little Secret Hints speculates that “maybe Aria is A and has a split personality, and when she is with the liars she is Aria, but when she is alone or in the A lair she [is A].” This is a really, really great note, and it certainly underlines the notion that Aria has a mental disorder and could have spent time in Radley.

Another potential Aria tie to Radley? Bethany Young could be Aria's twin sister — a theory seen on the Pretty-Little-Questions Tumblr. I know, I know — there’s not a blonde to be seen in the Montgomery family, but if Bethany is Aria’s sister, it would also explain why Eddie Lamb recognized Aria. Aria would be shifty about this because she didn’t want anyone to know of her ties with Bethany (and the fact that she had a mentally ill sister).

There’s another theory that ties together Toby, Bethany, and Aria as all being related, sharing the same father (Byron Montgomery), but with Ella being Aria’s mom (obviously) and Marion Cavanaugh as Toby and Bethany’s mom. Whoa, right? This theory is bolstered by the fact that creator Marlene King sent this now-deleted tweet back in June:

OMG, PLL fans — is “B.Y.” Bethany Young, or just the first two letters of Toby, Bethany, and Aria’s shared daddy’s name? “A.M.” sure seems like Aria Montgomery. Marlene, what are you trying to tell us?! And more importantly, does the fact that she deleted suggest she initially gave out too much information?

As theories abound, do we get closer to finding out the pretty little truth, or is everyone just messing with us? Guess we’ll have to wait until Season 7 (the final season of the show) to find out.