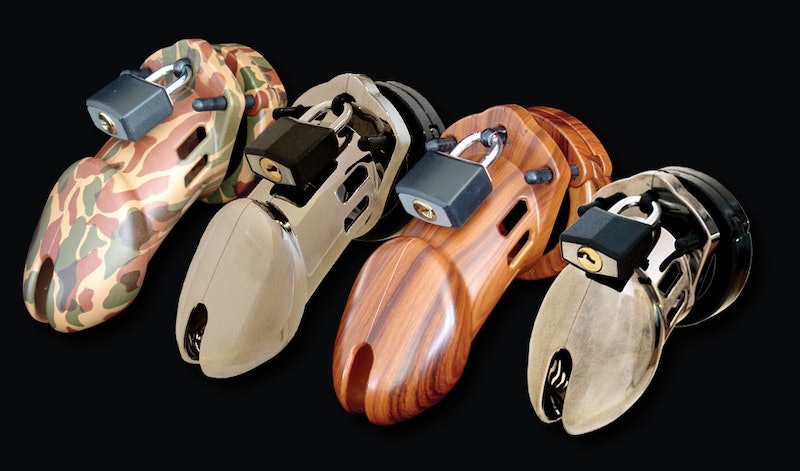 When I was sent a link to this article on male chastity, I assumed I was going to read about some sort of religious movement or maybe those celibate kids in Japan again. But the kind of male chastity Jeremy Wilson writes about in London magazine The Kernel is something different altogether. Kudos to Wilson for introducing me to a particular fetish I'd never considered before: Men who wear chastity belts.

The padlock-equipped chastity cages in the article are pretty amazing (men can choose between stainless steel, camouflage or a tasteful wood-grain pattern). Wilson devotes a lot of time to the particular mechanics of caged cocks, but the male chastity belts are just a tool for folks engaging in a larger pattern of kink, including orgasm denial and overall male sexual submission.

Male submission is an interesting topic — like many people, I find sexual psychology in all its variations fascinating. But the overall tone of the Kernel article is a little too incredulous for my taste. Here's the story's kicker:

Increasing numbers of men are submitting themselves to ritual humiliation and self-imposed denial of sex, saying they get a kick out of total submission to their wives.

To Wilson, "the men who embark on this extraordinary undertaking are evidently unhappy with their lot in life" (emphasis mine) despite the fact that none of the men quoted in his message-board-based expose actually says this. He knows they're unhappy, though, because ... well, he doesn't actually say. So for the record: I've known female doms and male submissives and — like people with any other sort of kink — they've been perfectly regular and relatively happy people. Consider this your friendly reminder that we shouldn't judge a person by their (consensual adult) bedroom behavior. Most people have some sort of kinky turn-on or fantasy, as 50 Shades of Gray so ruefully demonstrated.

Now go read all about male chastity — because who doesn't like reading about other people's sex lives? — but keep that in mind, okay? And if you'd prefer to read about male chastity and submission without a side of condescension: Here's a funny account of writer Brian Moylan's experience wearing a chastity cage for three days; here's a good essay about how the media treats male submission; an here's an open-minded account of the psychology of male sexual submission and female dominance.