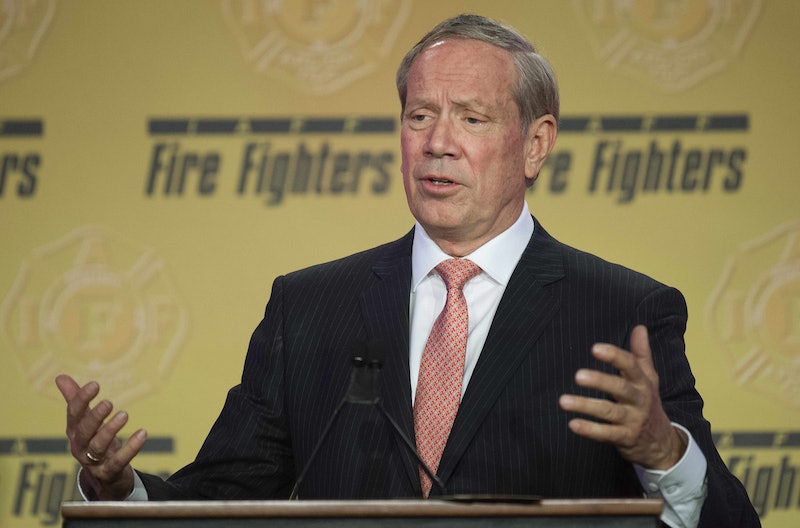 In earnest and dramatic fashion, George Pataki launched his bid for president Thursday, with a video posted on the “Pataki For President” website. The video announcement emphasized the Republican former New York governor’s anti-big government ethos, and contained echoes of 9/11. “We have always understood that we have a common background and a common destiny, and when we stand together, we can accomplish anything,” Pataki intoned. “I saw that on the streets of New York in the days and weeks after Sept. 11.” Pataki was governor of New York when the twin towers fell, and the video features theatrical shots of Pataki silhouetted against the New York skyline. The announcement makes Pataki the eighth GOP candidate to announce a 2016 run.

Pataki, a moderate Republican contender, served three terms but has not held elected office since 2007. He hinted at his plans to run for president earlier this week: “It will be a very stiff climb up a very steep mountain, but that hasn’t stopped me in the past,” he told the New York Post in an interview. Despite contemplating launching campaigns in 2000, 2008 and 2012, this will be Pataki’s first presidential bid. And, as The Washington Post reported, it’s a long shot. Pataki is up against stiff competition, with WashPo citing Jeb Bush (not yet announced) and Marco Rubio as the GOP favorites. But Pataki’s clearly trying to get out of the blocks fast, with a poignant, cinematic video announcement.

“The system is broken,” he said, in a catch-all denouncement of America’s current state. In what seemed a rhetorical nod to one of JFK’s most memorable lines, Pataki continued: “The question is no longer about what our government should do. But what we should do, about our government.” He then segued into a grandiose bout of American exceptionalism. “We are founded on a miracle. A heroic past, based on courage, on inventors, visionaries, and heroes. A god-given belief in the nobility of the human spirit. And the fact that liberty is the only way for that spirit to thrive.”

In regards to setting out any indications of policy, the video was vague on particulars but defined a clear outlook. “Washington has grown too big, too powerful, too expensive, and too intrusive,” he said, invoking the founding fathers. “It is time to stand up … and take back this government." As Pataki plays with his dogs and looks out at a scenic waterway (presumably the Hudson), he champions his own dearth of partisan feeling. “We need to recapture… that sense that we are one people,” he said. “When we do, we will stop empowering politicians and empower ourselves…”

To rousing music, a slideshow of quintessentially American, patriotic moments flash by. Pataki presses for unity, and the legend “Pataki for President,” looms large. The four minute video closes with Pataki overlooking the new One World Trade Center, contemplating America’s ability to come back “stronger and better.” In the aftermath of the announcement, Pataki is scheduled to address a rally in New Hampshire. A Quinnipiac University national poll of the GOP candidates released Thursday indicated no support for Pataki, according to TIME. Even surviving to the debate state this August is not assured, the magazine reported.

Since leaving office in 2006, Pataki has worked as a lawyer and opened a consulting firm. Having served as a Republican governor in a Democratic state, Pataki has recently been promoting his conservative side, Fox News reported. In a previous New Hampshire visit, he attacked Obamacare, criticized the current administration’s immigration reform, and suggested that the nation could not endure another Democratic president.