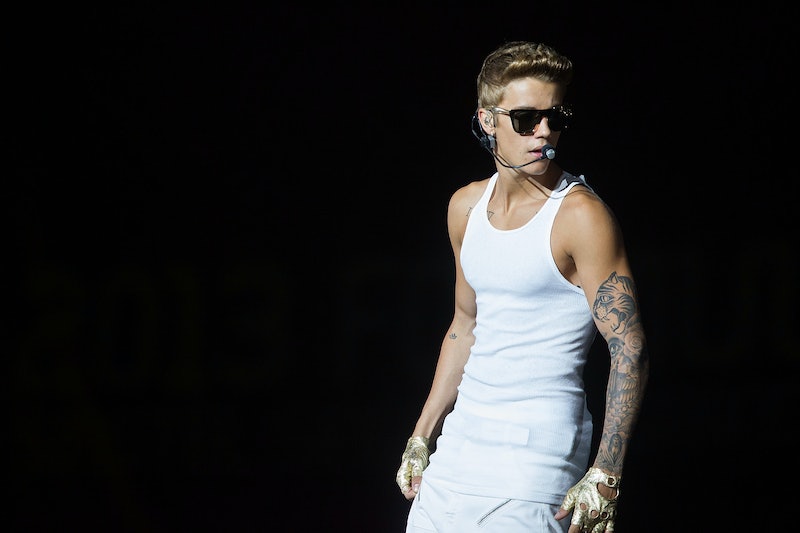 First things first: How terribly hilarious is the album cover for this song? It's literally just a sadface emoticon on a white backdrop in purple font. Why? Because Justin Bieber is so sad, and so deep, and this album cover has so much meaning — you just know his teeny-bopper fans are gonna eat this one up in their perpetual crusade to defend the guy who spends time in Brazilian whorehouses and likes to be carried up the Great Wall of China. It's even better than the album cover for his last song, "Bad Day," which was a cloud with pouring purple rain (not like the Prince song). Anyway, that said: Justin Bieber released a new song, "All Bad," and unfortunately it perfectly lives up to its name. It's all bad, that is. Sorry, guys!

Seriously, what is with Bieber's sudden emo streak? First he releases a single called "Bad Day" in which he sings all high-pitched about some girl leaving him, and now he's releasing a song called "All Bad" with a sadface emoticon album cover? Someone should go check on this kid, because he seems to be going through something.

Maybe we should take a look at the lyrics in this song: "They try to get at me/ Behind your back/ Tryin' to tell me that I'm just like the others/ But I ain't all bad." Okay, so the lyrics aren't that sad, but that album cover still looks majorly depressed, like it needs a pint of Ben & Jerry's, and a copy of Love Actually on DVD or something.

Either way, the song is pretty much exactly what you'd expect from Bieber at this point: High-pitched falsetto, slow R&B-inspired beat, and just missing the soundtrack of millions of teenage girls screaming in the background. In other words: All bad, and all so boring. You can check it out below, if you're interested.

More like this
Selena Gomez Reacts To TikTok Users Who Say She Shaded Hailey Bieber
By Grace Wehniainen
'Harry’s House' Is Inspired By A Japanese ‘70s Pop Icon & TikTok Fave
By El Hunt
9 Of The Thirstiest Lyrics From Harry Styles' New Album
By El Hunt
Becky G Once Had A Fear Of Speaking Spanish. Now She's Topping The Latin Charts.
By Tess Garcia
Get Even More From Bustle — Sign Up For The Newsletter