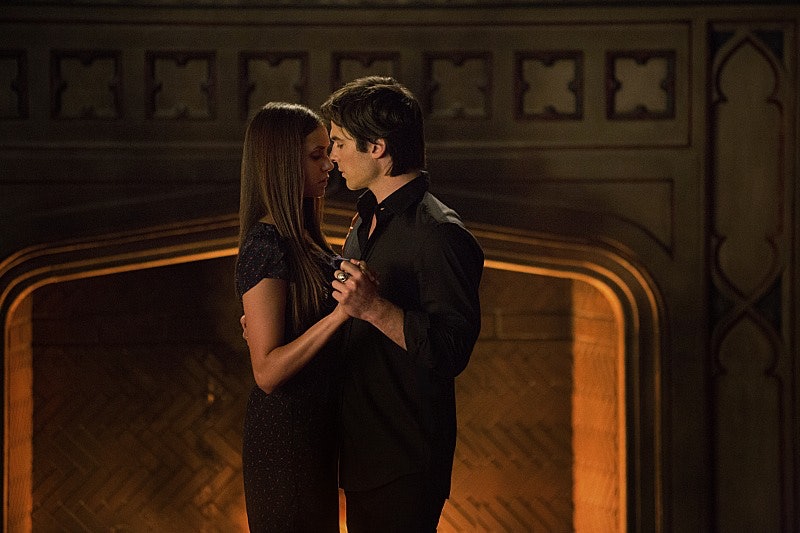 I'm not going to lie, Vampire Diaries ' Damon Salvatore and Elena Gilbert have showcased their fair share of flaws throughout the years. Whether it was constantly being self-destructive, or even a little too self-involved (I'll let you decide which is which here), individually these characters were never perfect. As a couple, however… well, that's a completely different story. After all, it's no coincidence why so many fans out there believe that Delena is the ultimate Vampire Diaries pair. It's because they pretty much are. In fact, chances are that their phenomenal chemistry has ruined all your future relationships. After all, how can anyone ever even attempt to top what these two have shared? Talk about setting the bar at an impossible level.

Ever since the Delena 'ship first set sail, they instantly became the envy (and obsession) of every TVD viewer. We didn't just want to watch them. We wanted to be them. So much so that no real-life romance has any hope of living up to our astronomically high expectations. (See what you've done to us, Julie Plec?) But, just in case you have any doubts on the subject, I've taken the liberty of listing some of the many, many ways Delena's perfection ruined us for life. No compulsion necessary.

1. When They Let Their Eyes Do All The Talking

I know it sounds weird, but the way these two used to gaze into each other's eyes was sometimes even sexier than any actual kissing. Just the anticipation and sheer weight of these sexually-charged moments were enough to make anyone need of a cold shower.

2. When Their Dancing Was On Fleek

Which was basically all the time. Seriously, these two had some serious moves that never failed to make us swoon.

3. When Damon Was Selfish In The Best Way Possible

Sure, he's admitting that he'd let Bonnie die in an instant, but that's only because he will always put Elena first, no matter what. He chooses her. What girl doesn't want a guy to say that to them?

4. Whenever They Had Sex

Seriously, two people should not be allowed to look this hot together. It's just unfair to the rest of us. If my sexual encounters don't include at least one torn shirt and two broken lamps, I consider the evening a complete and total bust.

5. Did I Mention The Dancing?

Because I really can't stress that fact enough.

6. When Damon Slayed Us With His Words

And now, thanks to him, I can't settle for anything less.

7. When They Were Ridiculously Happy Together

8. When Even Their Goodbye Was Flawless

My tear ducts may have been on overdrive that night, but that didn't stop me from appreciating what was truly an epic (albeit hopefully temporary) goodbye. Now, even my breakups feel subpar.