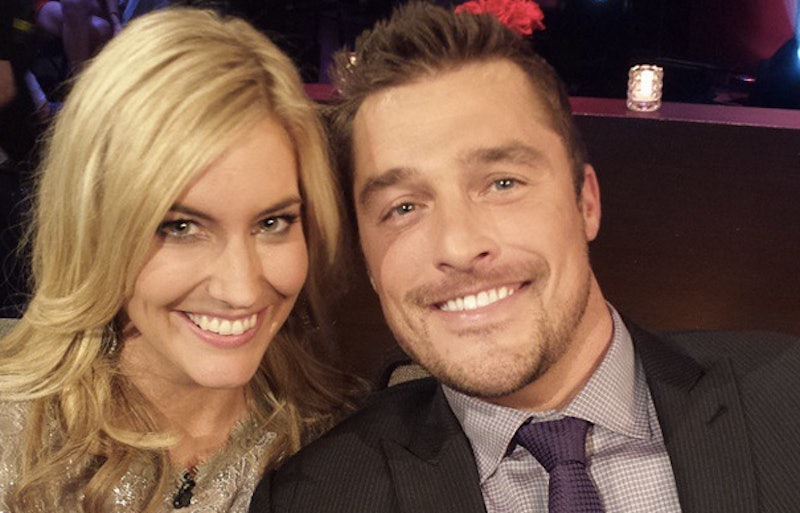 Well, here it is. The day that romance died. In case you haven't heard the news, The Bachelor couple Chris Soules and Whitney Bischoff have officially ended their engagement, and none of us have any reason to believe in love anymore. OK, that might be a tad dramatic, since Bachelor relationships are rarely successful, but it's still a huge bummer that they split, especially since they really did seem like they loved each other and were in it for the long haul. So why did Chris and Whitney break up? No official, confirmed reason has been given yet, and the statement they released to Us Weekly on Thursday is very vague:

Whitney Bischoff and Chris Soules have mutually and amicably decided to end their engagement. They part with nothing but respect and admiration for one another and will continue to be supportive friends. They wish to thank everyone who has supported them through this journey.

It's always sad when a reality TV couple decides to break up, if for no other reason than it's hard not to feel involved in their relationship after watching it develop on the show. But if they'll be happier without each other, then I'm happy for them. Still, that doesn't mean I don't want to get to the bottom of why their engagement didn't work out. Just because they haven't confirmed anything doesn't mean the rumors aren't swirling, and there are a lot of potential reasons floating around the Internet.

In fact, earlier this month Radar Online predicted that their eventual breakup would be caused by pressure from too much TV filming. Reportedly, the stress that came with Chris competing on Dancing With the Stars was too much for their new relationship to handle. I wouldn't be surprised if this was a rumor that turned out to be true. More distance and another reality show can't be easy on a couple who has only been together for a few months. It'd be more shocking if DWTS didn't put a strain on their relationship.

Even though the behind-the-scenes of their short life together is obviously none of our business, I can't help but be curious about what went wrong. I'm hoping Chris or Whitney will open up about their split eventually — just as long as the explanation isn't as heartbreaking as when Andi Dorfman explained her breakup with Josh Murray to Chris Harrison. I don't think my Bachelor loving heart could take it!