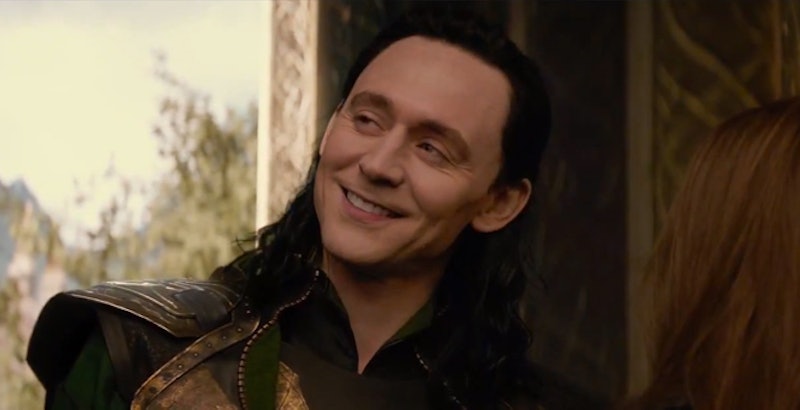 It's hard out there for a comic book super villain. Marvel's God of Mischief Loki may be the quintessential bad guy in Thor, The Avengers, and Thor: The Dark World — but look past his pale, sullen, evil exterior, and you'll find that Loki is actually one of the most relatable Marvel villains of all time. Honestly, I operate under the firm belief that Loki's not really evil; he's just got the hairline of a scheming, bitter dude who's been trying to prove to the world at large how much cooler and smarter he is than his totally basic brother Thor! There is no shame in that game. Seriously: take a closer look at Tom Hiddleston as Loki, and you might actually see a regular guy who's just caught up in a bunch of family drama, even though all he wants out of life is to look good and maybe take over the world. In other words, he's just like the rest of us!

Honestly, Loki could probably carry his own movie, and his dedicated following of Loki lovers would probably swarm theaters to see it — but sadly, it seems like Loki will forever be the bridesmaid, never the bride, and he won't appear onscreen again until 2017 in Thor 3. Until the return of Loki's sassy retorts, though, here are some of the best Loki quotes of all time that perfectly describe your life right now.

Trust Loki. He gets it.

Any drink. Really. Anything — doesn't matter. I don't know how to order from a wine menu anyway.

“Ooh. It burns you to have come so close."

“Born to be a king, I ask one thing in return: a front seat to watch Earth burn."

Appropriate for when you're stressed by work/finals and just want to watch Netflix all day and eat ice cream.

We're all unique! BOW DOWN.

"I am the monster parents tell their children about at night."

Also describes waking up and looking at yourself in the mirror after a night out — THE HORROR.

“Hitting does not solve everything."

You learned it in preschool, and it still applies today.

"I am burdened with glorious purpose."