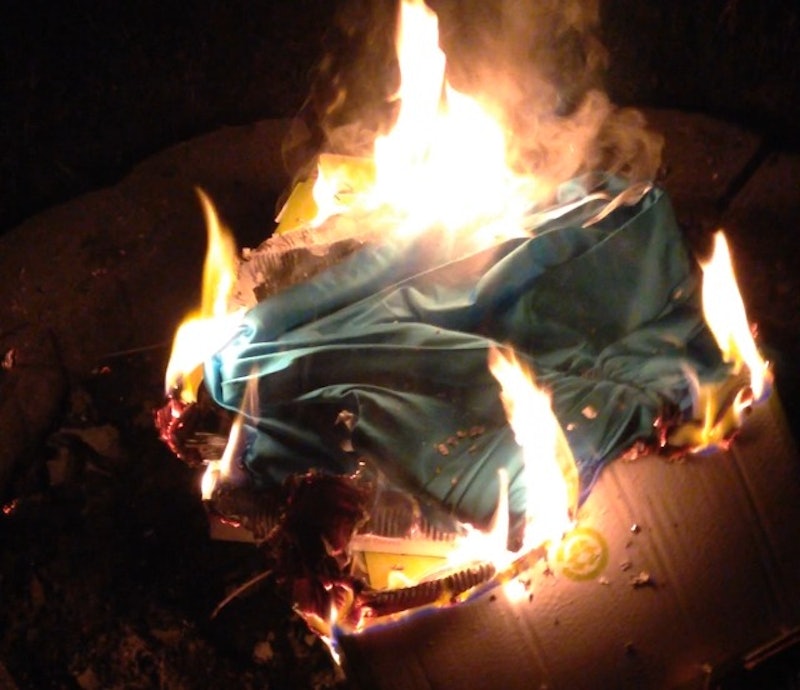 I’d never been fired before — until I was fired from a wedding. A long-time friend invited me to be a bridesmaid shortly after she announced her engagement — and then fired me less than a month before her wedding. After a decade of friendship and a year of meeting up at the mall to go bridal gown shopping, my invitation to the wedding was rescinded… and just like that, our friendship ended via a public post to her Facebook page. Suffice it to say, I was wrecked by how it all played out between us. Shocked by her decision, I came home and tore up the wedding invitation that had been hanging on the side of my refrigerator.

I didn’t know what to do… until I decided to burn my bridesmaid dress.

I wasn’t a huge fan of the color: an aqua blue I knew would clash against my fair skin. I knew there was no chance I could ever wear that dress again. It felt as tainted and regretful as the end of that friendship. So instead, I came up with a ritual of mourning and release. I burned my bridesmaid dress.

I'm a practical person — I would never burn anything that could just as easily go back to the store for a full refund. I'd even take a partial refund if it meant getting back a portion of the money spent on a dress I'd never wear. In this case, however, the dress in question came from an afternoon of thrift store shopping. The dress (photographed below) came from Goodwill with the tags still on — and only cost me seven dollars before tax. As we all know, you can't take anything back to Goodwill for a refund. The dress was a sunk cost — a "cost that has already been incurred and thus cannot be recovered." So I knew I wouldn't be losing anything significant in terms of investment. And I knew what I had to do next.

I Gathered A Few Good Friends And Practiced Fire Safety

When there's a ceremony to perform, you need your nearest and dearest for moral support. After all, do you really want to be the ex-bridesmaid who's burning a dress alone? I didn't think so. So call your good friends and tell them the whole sorry sob story. Let them listen to the good, the bad and the boring — and when you've finished, tell them you need their help with a special plan.

My best friend's boyfriend is the one who provided the fire-burning know-how. We used three cardboard boxes as ignition material for the fire pit and a fireplace lighter. I asked him what others should know if they want to burn a bridesmaid dress. "The number one thing is to make sure you're doing it in a place where you're not going to catch everything else on fire in the process," he says. "Knowing local fire codes is also probably important. If you've got access to a dedicated space where you know you're allowed to burn stuff in, have a hose ready to dose the flames as well as any embers that escape from your fire pit. Also, make sure the fire pit is centered away from any dangling tree branches -- you really don't want those to catch fire."

As it turned out, my best friend already had a box of sparklers on-hand. We lit those sparklers and ran around the fire, laughing as they flickered and sparked with hissing sounds. We felt like little kids with those sparklers in our hands. They took any "doom and gloom" out of this event and made it seem like a party.

I Cleansed The Space With Sage

In addition to the sparklers, my best friend had also tucked away a large bundle of sage in her dresser drawer. She couldn't remember when she bought it or why, but there it was — waiting for a moment like this. In her article "A Sage Smudging Ritual To Cleanse Your Aura & Clear Your Space," Tiffany Maloney writes that "Smudging your sacred space, your home or office, or even your body with sage is like taking an energetic shower, or doing a deep metaphysical cleansing. The smoke from dried sage actually changes the ionic composition of the air, and can have a direct effect on reducing our stress response... Any conflict, anger, illness or evil was absorbed by the sage smoke to be released or cleansed from the energy field of a person."

Her directions for burning sage advise to "use your hand or a feather to direct the smoke over your body from your feet up to your head, then back down again. As you do this, visualize the smoke taking away with it any negative energy from your life, any darkness or malady."

That's exactly what we did: my best friend and I took turns waving the sage smoke around each other. My thoughts: I release this dress and its negative energy with good will and intention. I am surrounded with love. I am free.

The cardboard pizza boxes blazed in the fire pit. The sage burned. The sparklers lit up. It was time — now or never.

I took a deep breath and put the dress in the fire. It took a few seconds for the flames to make their way to the edges of the dress —and then we watched it burn. Within five minutes, the dress was indistinguishable from the boxes of cardboard: the fire had consumed and burned it blue. In my head, I heard the music of Lila Downs: And the night sky blooms with fire / And the burning bed floats higher / And she’s free to fly… / Burn this night / Black and blue.

And I Let It All Go

The dress is gone. The ex-bridesmaid dress bonfire allowed me to release my anger, my grief, my desire to change what had happened — I could let it all go with that burned-up aqua blue dress. I hugged my best friend. I took pictures. I watched as her boyfriend put out the dying embers of the fire. And then I walked back into the house. I wasn't angry anymore. I felt peaceful and productive — and in the end, I felt that everything came full circle.