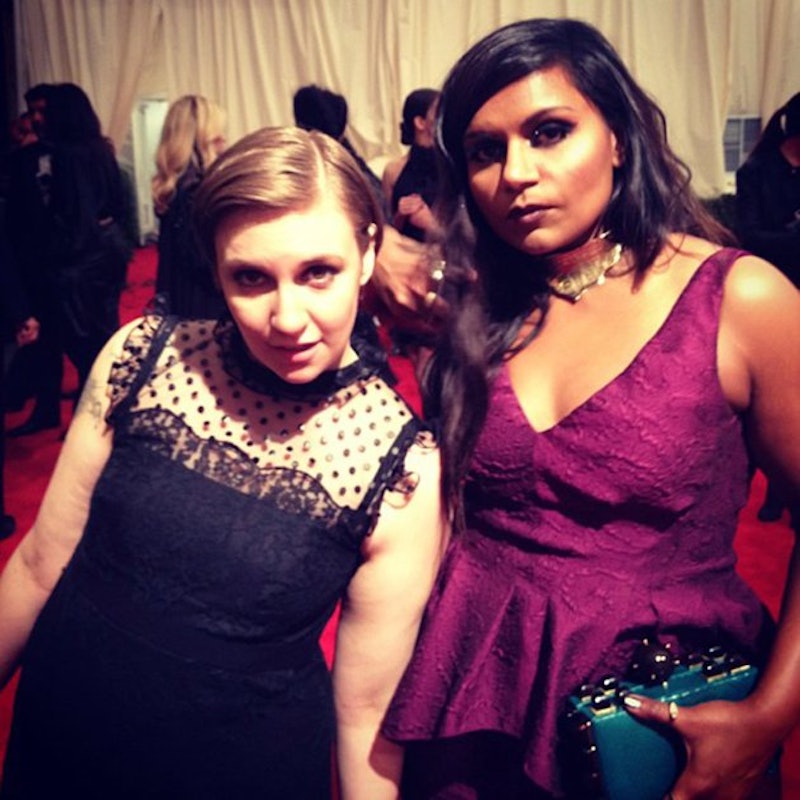 Lena Dunham and Mindy Kaling are two of the most funny, witty, intelligent, and talented people in modern pop culture, and they're pretty much BFFs, so what could be better than reading an interview between the two of them in which they talk about everything from misogyny to what they'd like their legacy to be? The answer is not much at all (maybe a room full of puppies, maybe), so here you go: Lena Dunham interviewed Mindy Kaling for Tavi Gevinson's new print publication for Rookie , and it's basically everything you would ever want from an interview with the two of them: Adorable, hilarious, and thought-provoking.

The two women are at the top of their games right now — Dunham was just announced as the keynote speaker for the next SXSW festival, and Kaling is doing wonders for women on television — so trust me, you're gonna wanna read this before you do anything else on the Internet today, so get started now. Here are some highlights:

On how they'd like to be remembered in pop culture:

LENA: Let's start light: What would you like your legacy to be? For example, I hope to have made it easier to be oneself in this hardscrabble world and to have rescued at least 15 animals from certain death. I'd also like to be known as "prolific, iconoclastic, and winsome." MINDY: "She threw the most amazing parties and she had the most gorgeous and cheerful husband. Gay teenagers would dress up as her for Halloween. She seemed to have read every book, yet no one ever saw her reading. She had the appetite of an Olympic swimmer and the physique of an Olympic figure skater. She dressed like Chloë Sevigny and could fuck for hours... "

I could write those for another 10 pages. Truthfully, I guess I would like to be remembered as a great writer and a kind person. I wouldn't mind if an expensive bag were named after me, like Jane Birkin.

What makes you laugh harder than anything else on earth? – I hate it, and I feel that the day I embrace it will be the day that I no longer have anything positive to offer the world. I love when people fall out of frame unexpectedly. I also love accents. Borat saying "my wife," you know, that kind of thing.

On Hollywood gender bias, and misogyny in the industry:

Do you ever get embarrassed to point out gender bias? I always apologize and say something dumb and sassy like "Not to be the girl who cried misogyny, but no one would ever say that to Larry David!" Somehow I feel the need to point out that I know I'm doing it, and that I may sound humorless, and that I wish I could be free and easy like Cameron Diaz at a hockey game. I totally understand this. I don't get embarrassed, though – I get nervous. Because journalists don't like to be told that their questions are sexist. Every so often I read insane things like, "Who is the next Lucille Ball?" and they list all these red-haired actresses. As though the essence of Lucille Ball's talent was derived from the color of her hair.

More than half the questions I am asked are about the politics of the way I look. What it feels like to be not skinny/dark-skinned/a minority/not conventionally pretty/female/etc. It's not very interesting to me, but I know it's interesting to people reading an interview. Sometimes I get jealous of white male showrunners when 90 percent of their questions are about characters, story structure, creative inspiration, or, hell, even the business of getting a show on the air. Because as a result the interview of me reads like I'm interested only in talking about my outward appearance and the politics of being a minority and how I fit into Hollywood, blah blah blah. I want to shout, "Those were the only questions they asked!"

I imagine this is the type of stuff they talk about when they hang out and watch SNL together in their PJs. Well, this, and maybe some stuff about Ryan Gosling sneaks in there too, because why wouldn't it? Someone give these two a web series podcast where they do exactly that for 30 minutes each week!

You can check out the rest of the interview preview over at Rolling Stone , and be sure to check out Rookie's upcoming issue for the full thing.