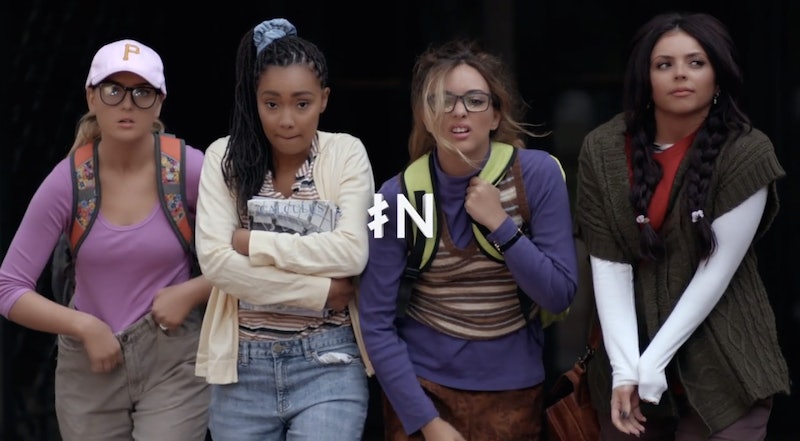 Little Mix is one of the greatest girl bands that ever existed, and I'll tell that to anyone who will listen. Much like One Direction, the ladies go their start on The X Factor. While they're made up of four girls (Perrie, Jade, Jesy, and Leigh-Anne) instead of five-now-four boys, the girls have another connection to One Direction in the form of Perrie Edwards being the fiancée of Zayn Malik. (Yes, the Zayn Malik who left One Direction recently.) Even without those 1D ties, however, the ladies are incredibly talented performers in their own right who have a loyal fan base who have been anticipating their latest music video for weeks now. Well, the wait is over, and Little Mix's "Black Magic" music video has finally debuted on the Internet. As I might have guessed, it is the greatest thing I've ever seen.

The video is a play on shows like Charmed and Sabrina The Teenage Witch, as well as films like The Craft, featuring the four girls are former nerds on the bottom of their high school food chain before Jade discovers a magic book in the library. With the spells they learn to do from the book, the girls become popular, get the better of the mean girl who shoved them earlier in the video, and have more fun than they'd ever had before. But don't take my word for it.

Check out the 11 best moments from the video below.

1. When They Pretended To Be Nerds

It's like they don't even realize they look like Jade Thirlwall, Perrie Edwards, Leigh-Anne Pinnock, and Jesy Nelson no matter how many pairs of glasses they put on.

2. When They All Had A Crush On The Same Guy

Seriously, when that one guy waved at them, they all started swooning. However, there doesn't seem to be any competition between them — probably because all the guys at that table are gorgeous.

3. When Jade Found The Spellbook

It literally fell on top of her head spewing magic all over the place. It's a wonder she missed it before.

4. When They Sat In A Circle

They lit candles for this. Clearly, we've been watching the same movies.

5. When Perrie Used Magic To Dye Her Hair

That's exactly what I would do if I had magic.

Actually, no, this is exactly what I would do if I had magic.

7. And Jade Was Spinning Her Glasses

Sorry, but if I had magic, I would no longer need to be wearing glasses. Then again, that appears to be what she did with her powers before or after spinning them around, so maybe Jade is me and I am Jade.

8. When They Strutted Through The School

9. When They Helped Out Another Nerd

See another guy being bullied like they were earlier in the filmvideo Blow him a magic kiss and make him irresistible to the same girls who were laughing at him!

10. When They Actually Went To Class

Ladies, it's a music video. Who goes to class anymore?

11. But Then Turned It Into A Dance Party

Oh, OK, I withdraw my criticism.

12. Then Started Dancing Through The Hallways

School's out for summer, guys.

Check out the music video below.