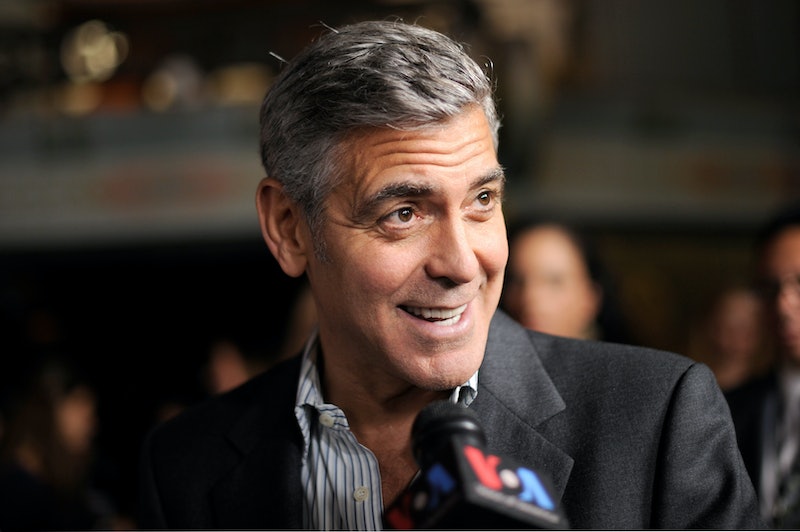 George Clooney is pretty much Hollywood's coolest cool guy, so seeing him totally throw shade at his fellow Hollywood elite is even more hilarious than it would be with any other celebrity. In a new interview with Esquire, George Clooney called out Leonardo DiCaprio and Russell Crowe, and still managed to save enough time to praise his buddy Brad Pitt, because that's true bromance.

So to be fair, Clooney's comments about DiCaprio seem more geared towards DiCaprio's entourage than the actor himself — but it's still funny, so here it is anyway: Apparently, Clooney and DiCaprio once ran into each other in Cabo, as rich people with better lives than you and I do, and they started talking about their shared love of basketball. Clooney suggested that they play, and DiCaprio said OK, even after Clooney explained that he and his team are "serious" about their game:

You know, I can play...I’m not great, by any means, but I played high school basketball, and I know I can play. I also know that you don’t talk shit unless you can play. And the thing about playing Leo is you have all these guys talking shit. We get there, and there’s this guy, Danny A I think his name is. Danny A is this club kid from New York. And he comes up to me and says, 'We played once at Chelsea Piers. I kicked your ass.' I said, 'I’ve only played at Chelsea Piers once in my life and ran the table. So if we played, you didn’t kick anybody’s ass.'

Epic already, but that's not all. The (lighthearted) shit-talking continues, as Clooney explains how he and his team absolutely obliterated DiCaprio's team — three times:

...And so then we’re watching them warm up, and they’re doing this weave around the court, and one of the guys I play with says, 'You know we’re going to kill these guys, right?' Because they can’t play at all. We’re all like fifty years old, and we beat them three straight: 11–0, 11–0, 11–0. And the discrepancy between their game and how they talked about their game made me think of how important it is to have someone in your life to tell you what’s what. I’m not sure if Leo has someone like that.

As for his beef with Russell Crowe, that as it turns out is a little less lighthearted. As you may recall, back in 2005, Crowe accused Clooney of selling out, saying, "I don't do ads for suits in Spain like George Clooney or cigarettes in Japan like Harrison (Ford)." Clooney, at the time, responded by saying that he "doesn't like artists attacking artists" — and then seven years later, commented on his decision to do adverts overseas, saying, "I don't have to make money, I do films for scale and then you know, I go do coffee commercials overseas and I make a lot of money doing those, so I get to live in a nice house...I don't give a shit. And people will go, 'Oh, that's a sellout!' You know what? Fuck you!" If that's not a subtle jab towards Crowe, I don't know what is.

Apparently, the feud with Crowe subsided years ago, but Clooney had no problem candidly talking about it with Esquire:

The truth is that [Crowe] did send me a book of poems to apologize for insulting the shit out of me, which he did. He picked a fight with me. He started it for no reason at all. He put out this thing saying, ‘George Clooney, Harrison Ford, and Robert De Niro are sellouts.’ [...] And so I sent him a note going, ‘Dude, the only people who succeed when two famous people are fighting is People magazine. What the fuck is wrong with you?’

But then I had a year. Then I had Syriana and Good Night and Good Luck, and he was gonna see me at the Golden Globes ’cause he was nominated for Cinderella Man. So he sends me a disc of his music and a thing of his poetry. I think he said, ‘I was all misquoted,’ and I was like, ‘Yeah, yeah. Whatever.’

As for Brad Pitt — well, Clooney had nothing but good things to say about Mr. Angelina Jolie:

For a long time now, Brad has been the biggest movie star in the world...He’s bigger than me, bigger than DiCaprio. And I really admire how he deals with that. It’s not easy for him. But he tries to be the most honest version of Brad Pitt that he can be. And he also remains unavailable. He’s still a giant movie star because you can’t get to him. That doesn’t mean that I don’t think of him as incredibly talented and smart and all those things. But you also can’t get to him.

You can check out the rest of Clooney's interview over at Esquire, here. Now — who would totally pay to see that basketball game between Clooney and DiCaprio? I hope someone filmed that.

More like this
Jake Daniels Just Became The UK’s First Active Football Player To Come Out As Gay Since 1990
By Sam Ramsden
What Is Jeanie Buss' Net Worth? The Lakers President Is Uber Rich
By Hugh McIntyre
Laura Dern Said “Cultural Awareness” Made Her Rethink This 'Jurassic Park' Fact
By Grace Wehniainen
Watch The Dramatic First Trailer For Netflix's Jennifer Lopez Documentary
By Alyssa Lapid
Get Even More From Bustle — Sign Up For The Newsletter