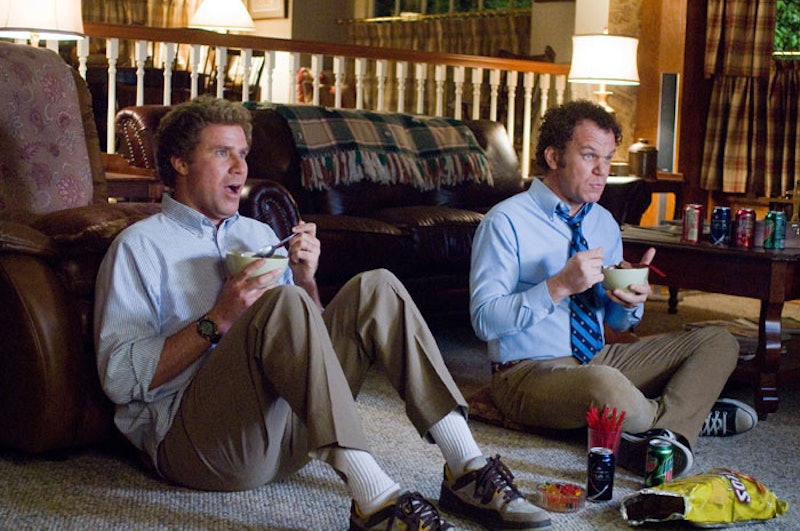 Sometimes, parents joke with their kids and say that they're kicking them out on their 18th birthday — after all, that's when kids are officially viewed as "adults," and can find a job without the hourly restrictions that past summer jobs often enforced. Yet as we graduate college, we often find ourselves moving back in with parents in between what we'd later know to be "the good ol' days," and our own definition of adulthood. Some of us are stuck there well into our 30s, either by financial restrictions or family obligation. While this can, and without a doubt does, suck a whole lot, there are a few things that we can learn from our parents even after thinking that we've learned it all.

There is definitely a shift between living in your childhood house as a child, and as an adult. Back when we were kids, the house seemed so big. There were plenty of places to hide when we wanted to get away from reality. Now? Your dad is blasting the news from downstairs at levels that the entire neighborhood can hear. The floor creaks with every step you take, which makes you feel even worse for planning an 11 p.m. escape. The rare 20 bucks you find now goes towards savings and not towards weirdly shaped jeans from Delia's.

Even though the world seems extremely unfair right now, this span of time between near independence and real independence is actually an amazing time to grow up and get to truly know your parents on a completely different level. Here are a few things you'll learn by shacking up with mom and dad as an adult.

1. How expensive housing is

Rent is really, really expensive — especially if you grew up close to a major city. While you're looking for a new arrangement, your parents are bound to look over your shoulder at listings and say things like, "Well, back in my day, houses only cost $25 grand! I don't know how you kids do it these days. I had a low-income job but was still able to pay off the house in a matter of years!"

We "do it these days" by crashing with you, Mom and Dad. And we're super grateful that you're letting us save for the future, even if we don't always act that way.

Back in the day, it was all block parties and egg-borrowing between your parents and the neighborhood. Now, everyone's gotten a little bit older, and the Mr. Rogers-esque relationship your parents had with the neighborhood mailman is now crumbling. "I didn't give him a Christmas tip last year, since he never comes at the same time!" your dad hollers. "Sometimes it's someone else! How do I know who I'm giving my money to?!"

You'll also get the gossip that they rightfully neglected to tell you back in the day — which neighbor had the police called on them, who drinks a little too much on the weekends, and what two neighbors are secretly sleeping together. With gossip like that, you don't even need tabloids.

3. The fact that there's nothing better than home cooked food

You lived on ramen and Hot Pockets for years, and your idea of "fine dining" was heading to TGI Fridays for some apps and 'zerts. Now, you're woken up every morning by the smells of bacon and scrambled eggs. You're now at an age where you truly appreciate home cooked meals and actually feel inspired to learn how to cook really well. Like, to a level where you know the difference between cooking oils and don't rely on a microwave. Since your mom now has your full attention, she's probably more than willing to pass on her secrets and tips.

4. There are some items you should always buy in bulk

Have you noticed that your parents never seem to run out of toilet paper? They have like, 900 rolls of it down in the basement for some reason. Back in college, they used to stuff some rolls in a tote bag for you, since they were under the impression that you'd completely forget to buy some at the store. And they were right!

Your parents also have an endless supply of paper towels, toothpaste, and toothbrushes — and you'll learn how amazing it feels to never have to worry about running low on any of these essentials. Once you move out, the first thing you'll probably do is sign up for your own Costco membership.

5. How to (seriously) clean the house

When you're back with your parents, you'll truly learn the importance of keeping a clean house — and you'll be more inspired to have a cleaning schedule just like mom does. Before watching her in action (and paying attention this time), you never knew that blinds got dusty or that fridges needed to be scrubbed. No wonder your off-campus apartment smelled like stale garbage all the time!

Your parents will probably expect you to pick up after yourself, as you should. As much as being told to do something sucks, trust me — it's for your own benefit.

6. How to have better taste in men

The good news is, if you do meet a guy while living at home, they'll probably be a pretty upstanding individual. Since they'll have to meet your parents almost immediately, there's a good chance you'll realize that your days of crushing on the bad boy are long gone. Now you'll be aiming to meet someone who not only impresses you, but passes the parent test.

By living with your parents, you'll learn the importance of money — if you financially contribute to something, your opinion on the matter will definitely be heard. So even if you think the house decor is super lame, it's out of your control. Did you buy the house? Are you putting money towards the house? If not, you can't really complain about the way your parents choose to live.

On the plus side, seeing how your parents maintain a house will give you great ideas for how to handle home ownership when your time comes. If you're getting tired of sharing the only full bathroom in the house with them, you know what amenities you'll look for when purchasing a home in the future.

8. You're not washing your bedsheets enough

In college, you washed them like, three times a semester. The entire process of de-bedding and re-bedding was annoying, especially when your tiny dorm washer and dryer were all the way in the basement. However, clean sheets are important to your mom. She saw a report on the news about dust mites feeding on your dead skin cells, and she can't get the mental image out of her mind. Just get in the routine, since it'll make her happy, and it'll help you both sleep better at night.

If she catches you eating in bed, you'll probably be grounded — even if you're in your 20s. Because she saw something in the news about bug infestations, and how dare you.

9. Mom and Dad are people too

They make mistakes, they tell stupid jokes, and they still don't understand this modern day iPhone technology app stuff, or why it's important. They need you to explain how to restart their modem, but they'll blame you first for "breaking the Internet."

They don't do this stuff to be annoying — they do it to show you, firsthand, what your future will be like. You won't always have all the answers, you'll speak without thinking sometimes, and you'll feel out of the loop with all of these "newfangled terms." With time, you'll learn to respect them as more than your mom and dad, but two people who didn't always have their life together and had to figure it out along the way. When you have kids, you'll consider yourself to be more than just "Mom" — and thanks to this period of time, you'll know your role a little bit better based on your own interactions with your parents as a full fledged adult.