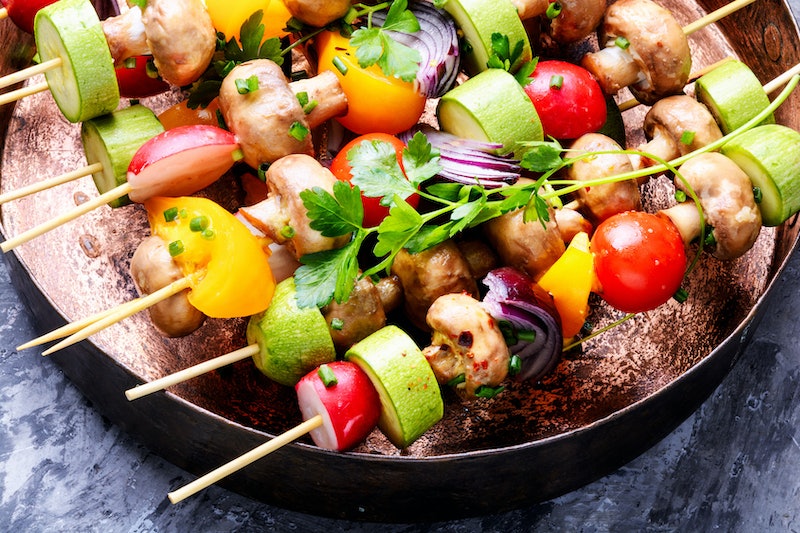 Warm, sunny weather means one important thing: it's grilling season! While many people associate barbecues with cheeseburgers, hot dogs, and some chicken kebobs, not everyone thinks that way. For a vegan, life can get just a little more difficult once the grills are brought out for parties and dinners. Being a vegan during BBQ season is great if you're surrounded by other vegans, but if you're not... well, it can be a little frustrating.

While there are tons of different vegan options you probably didn't know you can grill, most people stick to the basics, a.k.a food a vegan can't eat. This makes being invited to barbecues super tricky. You don't want to be that person, but you also don't want to be stuck sitting outside, salivating while everyone is chowing down on delicious food. And really, why should you? You deserve to have a good time too!

But every vegan knows that it's not always that simple. There are a lot of issues — and people — you have to deal with when you're attending a social event, and you're not sure what will be served. Need some help navigating barbecues the next few weeks? Here are the 10 emotional stages every vegan goes through during grilling season, plus a few tips on how to cope. Happy BBQing!

Stage One: Excitement for summer and BBQ season.

Stage Two: Slight disappointment when you remember that for a lot of people, BBQs mean one thing: meat.

Stage Three: Excitement again as you push away those thoughts, and think about the great things you get to eat.

Stage Four: Slight nervousness when you get your first barbecue invite.

Surely there will be at least one vegan option, right? RIGHT?!

Stage Five: Confusion as you wonder what to do.

Stage Six: Dread once the day of the barbecue comes.

What if there's NOTHING for you to eat, and you just sit there?

Stage Seven: Relief when you realize the host has provided you with options.

Also, gratitude that your friends are awesome.

Stage Eight: Paranoia and anxiety as you try to avoid worrying about how your food is getting cooked.

The cook would never put your veggie burger in the same spot he/she just cooked a bunch of burgers... probably.

Barbecues are the best.

Stage 10: Exhaustion as you think about having to do this all summer long.

At least you got through this one!

Want to make life easier and barbecues more enjoyable? Here are five tips on how to cope with BBQ woes when you're a vegan:

1. Offer to make a crowd-pleasing dish you know you'll be able to eat.

It's polite to offer to bring food when you're invited to a barbecue, and this ensures that you have at least one item you can chow down on. Killing two birds with one stone!

2. Let the host know ahead of time that you're vegan so they can prepare.

Don't feel weird about telling the host you're a vegan. If they don't know, they might feel bad that they didn't even have a chance to try to get you something. It's easier to tell them before the day of the barbecue rather than when you walk in.

3. Don't be shy about how your food is being cooked.

If you're worried that the cook is going to plop your garden burger down in the same spot he/she just cooked up some hot dogs, just go over and either ask to do it yourself or give little instructions.

4. Host your own awesome vegan BBQ.

Introduce everyone to how great it can be to eat all vegan! And this way, you have all the control.

5. Relax, and focus on enjoying yourself more than the food.

Yeah, BBQs are about food, but they're also about hanging out and having fun. Have a good time!