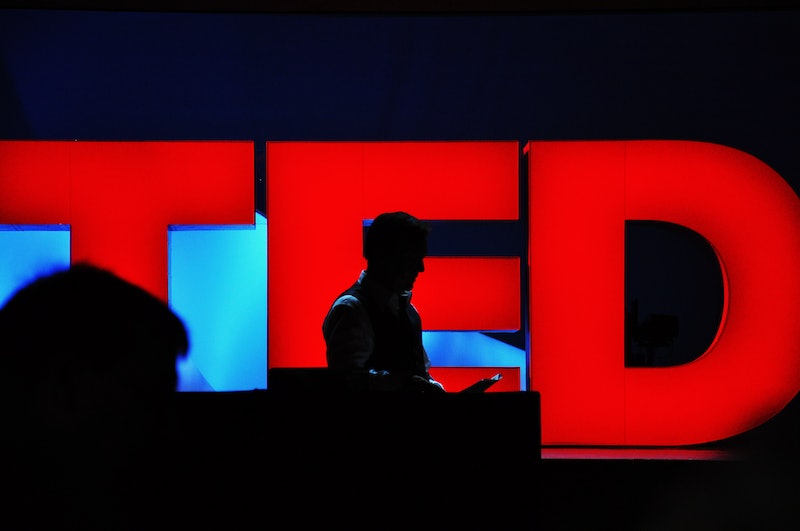 There have been TED Talks on just about every topic under the sun, but until this past Friday, none had ever focused on abortion. That changed with Aspen Baker's TED Talk about abortion at the TED Women Conference. And in addition to being groundbreaking, her talk was also just plain awesome.

Baker, who today is co-founder of the abortion support group Exhale, says that she grew up in a Christian community where being pro-life was the norm. “As a kid, the idea of abortion made me so sad that I knew if I ever got pregnant, I could never have one,” Baker said. “And, then I did.”

When Baker became pregnant unexpectedly, shortly after college, she didn't know what to do, but after confiding in a friend, Polly, who told her that she herself had once had an abortion, Baker eventually decided not to have the baby. “Polly gave me a very special gift: the knowledge that I wasn’t alone and that [abortion] is something we can talk about,” Baker said in her TED Talk. And all these years later, she still sees the immense value in women being able to tell their stories, and the support that can give other women.

Today, Exhale prides itself on being "pro-voice," giving women who have had abortions a chance to talk to about their experiences free of the weight and the hazards of the political rhetoric around abortion. As Baker explained in the talk, “The dialogue around abortion in the United States has left little room for anything beyond pro-life or pro-choice. It’s political and it’s polarizing... There is a gap between what happens in politics and what happens in real life."

Because, as she went on to explain, “personal abortion experiences don’t fit neatly into one camp or the other."

The sad truth is that even though roughly one in three women in America will have an abortion at some point in their lives, abortion remains a taboo topic — as evidenced by the fact that Baker's TED Talk was the first one to focus primarily on abortion. Given that there are almost 2,000 videos for TED Talks on the organization's website, you'd think that one of them would already have covered something that is a part of so many people's lives.

And yet as long so much stigma about abortion abounds, women will continue to feel they cannot talk about their experiences or their choices — even if their choice is not to have an abortion. The rhetoric around abortion allows very little room for nuance, despite the fact that individual personal experiences tend to be made of nothing but nuance. Which is why it's so incredibly awesome that Exhale gives women a place to talk about this. And why it's awesome when women are willing to share their experiences publicly, as Baker does in this TED Talk.