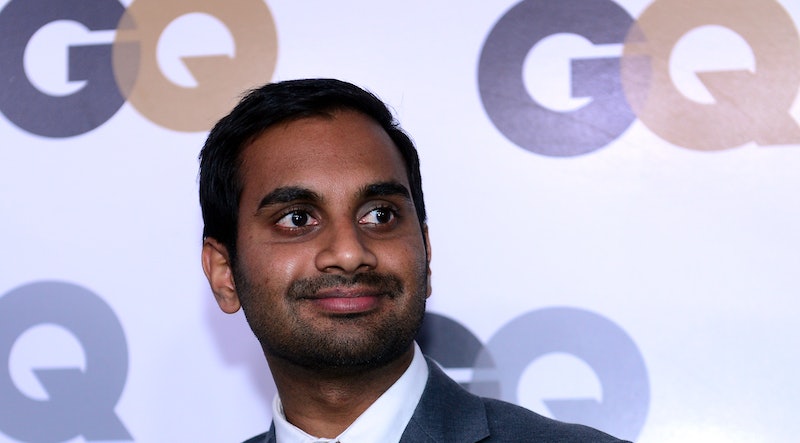 "How often do you see two guys talk about love for an hour?” The question, posed by author Daniel Jones, was aimed at an audience about to witness the New York Times editor discuss Aziz Ansari's Modern Romance , the actor's upcoming nonfiction work on love in the 21st century, at BookCon in New York May 30. The response from the crowd seemed to indicate that the answer was pretty much "never" — but judging by their ecstatic reactions at the talk's end an hour later, they would've been happy watching the men speak for days.

At the panel, the former Parks and Rec star and his co-writer, sociologist Eric Klinenberg, spilled on all the details of their collaboration, out June 16: the subjects, the research, and the awkward, hilarious, all-too-relatable real-life inspiration. All in all, the book sounded fantastic — and judging by the info Ansari released, it's going to hit home very hard for anyone who's ever tried Tinder or freaked out over an unanswered text.

Below, seven reasons why Modern Romance will be all too real:

It Analyzes Your Texts — Even The Bad Ones

Actually, especially the bad ones. Reading from his book, Ansari read aloud the hilariously awful texts sent from an anonymous guy to a girl he was interested in, the worst of which had the crowd in unanimous "oofs." The star laughed along, but explained how in today's society, it can often not matter what you're like in real life if your texting etiquette isn't on point.

And It Gets Text Anxiety

Think you're the only one who freaks out over disappearing text bubbles? You're not alone — Ansari described his own anxiety over unanswered texts from his girlfriend, even though they've been in a committed relationship for two years. These problems may feel unique, but the author believes they're actually "very universal." In the book, he delves into all the issues that stem from the younger generation's preference for texts over calls, joking that by today's standards, if a guy puts in even the most minimal effort in a text conversation, "that alone just makes women’s vaginas go insane."

It Understands The Issues With Online Dating

Ansari has nothing against meeting people online — he stood up for Tinder by saying that meeting people in a bar is still "swiping right on their face" — but says that many people are too preoccupied with their on-screen presence than meeting up in person. "It should be called online introduction services" instead of online dating, he said.

Tired of relatives asking you why you're single? Give them Modern Romance to explain that your generation's big trend is marrying later, or not at all. Even meeting people is different than it was 20 years ago; Ansari quoted statistics to prove that because we have "more choices than ever before," our decision-making suffers. Basically, the more options we have, the harder it is to make the choice, and the less satisfied we are with it since we aren't sure we made the right one. Great!

It Gets The Problem With Dating On Social Media

It's hard to get over a breakup when your ex's face is still plastered all over your Facebook page. Modern Romance tackles this problem, acknowledging that starting anew is more difficult than it ever was, thanks to social media, but that many people today are in the same boat.

It Explains What You're Doing Wrong

Older marriages started "at a simmer," explained Ansari, before eventually, if successful, going "to a boil." Today, however, people are "trying to find boiling water right away," and the attempt to find a person who fits every box on the list right off-the-bat is incredibly hard.

It Will Make You Feel Less Alone

Too many people now are caught up in finding passionate, short-term love, which Ansari compared to a drug for how distracting and detrimental it can be to a person, rather than companion love, meant for the long run. If you're worried you're doing romance wrong, though, don't be — as Ansari said, "we're all in it together."