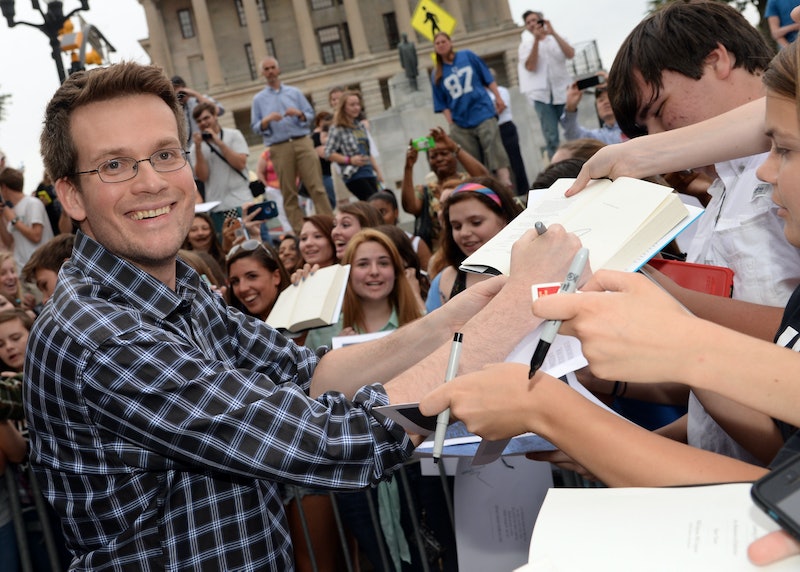 I'll admit that some of the screaming was mine. In arguably the prestige event of BookCon 2015, John Green announced he'll appear in the Paper Towns movie, the second movie adaptation of one of his ridiculously famous young adult novels, after (duh) The Fault in Our Stars . (You remember, it's the one that made you weep uncontrollably.) During the panel Green — along with screenwriter Michael H. Weber, stars Nat Wolff and Justice Smith, and composer Ryan Lott, though Cara Delevingne was noticeably absent, sad face — unveiled a new exclusive trailer and the eyebrows and Nair scene (you know what I'm talking about, readers) from the Paper Towns movie. It was basically Beatlemania.

When filming his cameo, Green described doing take after take, then doing what he thought was his best take:

And the director said, "I think that was usable."

I reached out broadly for this part, Green joked: "Daniel Day Lewis tried to give me a method acting tutorial and I got really deep into my character and I gave a 'usable' performance." Green also described coming back from his take drenched in sweat. "I was all worked up," he said.

"But [the part] is so minor," quipped Paper Towns composer Lott.

The new trailer opens with the famous line from Green's Paper Towns book: "The way I figure it, everyone gets a miracle. My miracle was this: out of all the houses in all the subdivisions in all of Florida, I ended up living next door to Margo Roth Spiegelman"

But Green spoke out about the line and what it means for his story's critical analysis of the manic pixie dream girl and feminism in general.

Treating a person as a miracle is a mistake ... It's unfair of Q to ask [Margo] to live up to all his expectations. ... You do girls a disservice by putting them on a pedestal or romanticizing them. That idea was the most important idea for me to preserve [from the book]. Cara understands very profoundly what it's like to be treated as a two-dimensional image.

Green also compared his experience on set with Paper Towns to working on The Fault in Our Stars, which was created by the same team. As everyone with a heart can imagine, Green says being on set at The Fault in Our Stars was "pretty sad." (Understatement, amiright?): "It was extremely sad. Every day. Relentlessly."

For Paper Towns, the screenplay and movie doesn't parallel the book as closely as does The Fault In Our Stars, as the movie team took some creative liberties to put the story on screen.

"This one was a lot trickier, we literally and figuratively took apart the book and studied different parts of it," said Weber. "We did a print-up of the book."

"Oh, you don't even buy your own copy?" Green interjected with a laugh.

"We took apart the book and wrote all over it," Weber said, explaining how his team carefully reconstructed the story trying to find a balance between so many of the book's plot points, themes, and even genres.

But will we like it? Star Wolff who plays Q (and who also appeared in The Fault In Our Stars) is pretty certain:

"I'm a bigger John Green fan than any of you guys," he said. "I'm just lucky to be the guy who's in the most scenes."