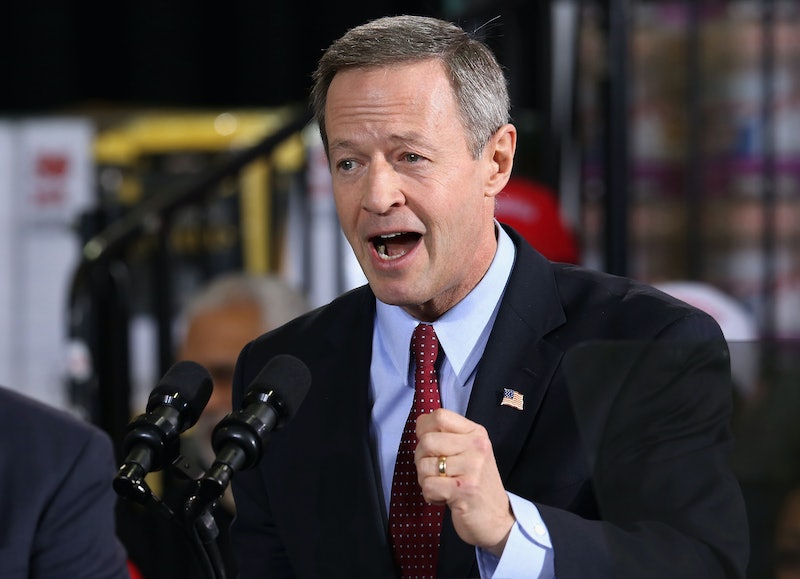 On Saturday, Martin O'Malley made the official announcement that people had been expecting for a while — he'll be running for president in 2016, squaring off against (at the very least) Hillary Clinton and Bernie Sanders. But he has those two licked in at least one department — Martin O'Malley is a musician, and he's clearly not afraid of letting people know it.

For example, just check out how he teased his campaign announcement on Friday, one day before the big news dropped. On YouTube, O'Malley posted a video of himself playing lightly on a guitar, tuning for a few seconds before strumming out the opening notes of "Hail to the Chief." At the end of the video, viewers were implored to sign up at omalleydecision.com, so that they could be the "first to know." Although, considering he filmed himself playing the presidential anthem, the answer already seemed pretty obvious — what could the goal of such a video conceivably be if he hadn't planned to enter the race?

In any event, that brief teaser is far from the only place you can see O'Malley flash his musicianship — here are four more videos of the former governor of Maryland and Baltimore mayor showing off his skills, covering some interesting, evocative songs:

At some point in 2010, while still serving as Maryland's governor, O'Malley paid a visit to a music store in the Baltimore County suburb of Catonsville and struck up a song. While the audio quality isn't fantastic, you can hear O'Malley belting out Johnny Cash's "Folsom Prison Blues," one of his best-known songs. I guess this shows that O'Malley isn't shy about controversial artistic content; "I shot a man in Reno just to watch him die" is a little impolitic, after all.

On Memorial Day in 2014, O'Malley took to the streets of the state capitol of Annapolis, with a Baltimore Ravens t-shirt on his back and a banjo in hand. He essentially played street musician for a day, and this is probably the best evidence of him singing in a smooth tenor, with little backing music. O'Malley was still Governor at this point, though not for much longer — he completed his second term on January 21, 2015, and has been likely plotting a presidential campaign strategy since. Less time for streetside banjoing, perhaps?

This Land Is Your Land (Woody Guthrie)

Two things are definitely working against O'Malley in this case. First of all, accoustics and recording quality are important, and they may not be quite up to snuff in this one. But the bigger deal is the audience — if you've got no rhythm, don't try to clap along! This should be the number one rule of folk-music audience participation. It speaks well to O'Malley's patience and experience as a performer that he wasn't rattled by it, however.

Christmas In New York (The Pogues)

This one's not just O'Malley going solo — he's got his whole act there with him, too. He's the frontman for "O'Malley's March," a name that I really hope his bandmates are cool with, and in December of 2014 they covered "Christmas In New York," by classic Celtic punk rockers The Pogues.