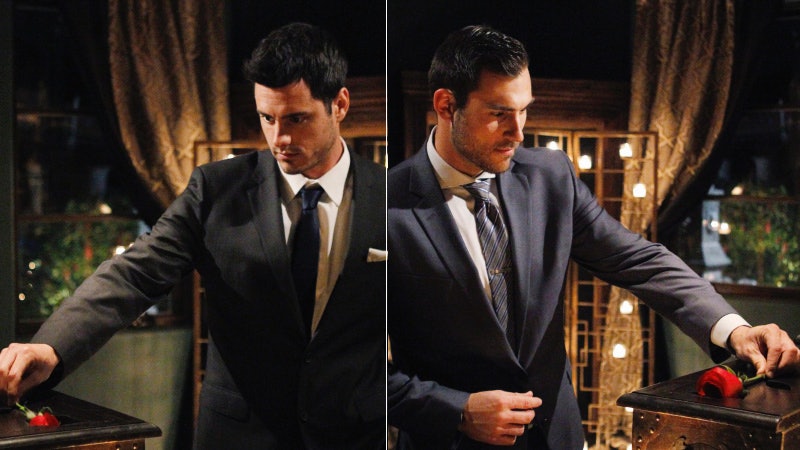 Watching The Bachelorette is always a pretty emotional experience. No matter how hard you try, you always end up getting really invested in one or two of the contestants, only to be disappointed if/when they get sent home — or even when they win, because that means they're off the market and you no longer have a chance to win their love via social media. (What, is that just me?) It's only made more difficult when a few of the guys have the same name, especially at the beginning when it's hard to differentiate people easily. Such is the case with Ben H. and Ben Z. on The Bachelorette — these two, no matter how physically different, are kinda hard to tell apart because they have the same name. But, once you know the differences, you'll know which Ben is right for you.

Now, these aren't hard and fast qualifications, and, of course, we're only a few weeks into the season, so I could be completely off base about these dudes. But, considering the fact that I kinda called the fact that Shawn E., the amateur sex coach, wouldn't make it past the first round, I think we can all just ahead and consider me to be an expert. So, through fake science and my brain, I've identified their major characteristics, whether or not they're anything alike, and the major differences between the Ben H. and Ben Z. Ladies, get ready for the ultimate breakdown of Ben-ness.

He's the 26-year-old fitness trainer from San Jose, California who had to grow up pretty fast after he lost his mother to cancer at age 14. Honestly, I quite enjoy Ben Z. He's delightful to look at, and when Kaitlyn says his name really fast it sounds like she's calling him Benzy, which is pretty fun.

Ben H. is significantly smaller, probably because he doesn't walk around dead-lifting everything in sight for a career. He's also 26, but he's a software salesman from Denver who cheerfully considers marriage to be a "total sacrifice." So, you know, he's pretty much the guy you want to bring home to Mom, assuming Mom also is not a fan of the institution of marriage and wants to hang out with that one guy at the bachelor party who always jokes about how marriage is like prison.

Are They Really Similar At All?

Yeah, not so much. Other than the fact that they're both named Ben, it's not like they've got much else in common. Sure, they're both 26, they're both regulation studmuffins, and they both seem sweet enough. But, I have a feeling they'll end up distinguishing themselves from one another pretty quickly as the season goes on. Just get past the initial name confusion, and you'll be alright.

So, Which Bachelorette Ben Is Right For You?

You spend all of your free time in the gym, and have regularly fantasized about hooking up with that trainer who you make weird eye contact with while he's stretching people out. You also prefer a seductively stubbly face as opposed to clean-shaven baby-faced men, and you literally refuse to ever be bigger/taller/heavier than the person you're dating. Your ideal first date would be attending a boxing match or participating in a mud run, followed by a lengthy discussion about your upbringing, the importance of family, and the nuances of different protein shakes.

You're more of an indoor cat, and you were always attracted to the guy that got friend-zoned by every other girl in high school and college. You also enjoy long walks on the beach, a nice buttery Chardonnay, and when guys pair deep V-neck sweaters with cords. I'm also assuming you work some kind of tech job, because I'm not really sure how else you'd meet a software salesman.

There you have it. Oh, and if you don't fall into one of the two categories, you're likely a Chris Harrison kinda girl. So, that's nice.