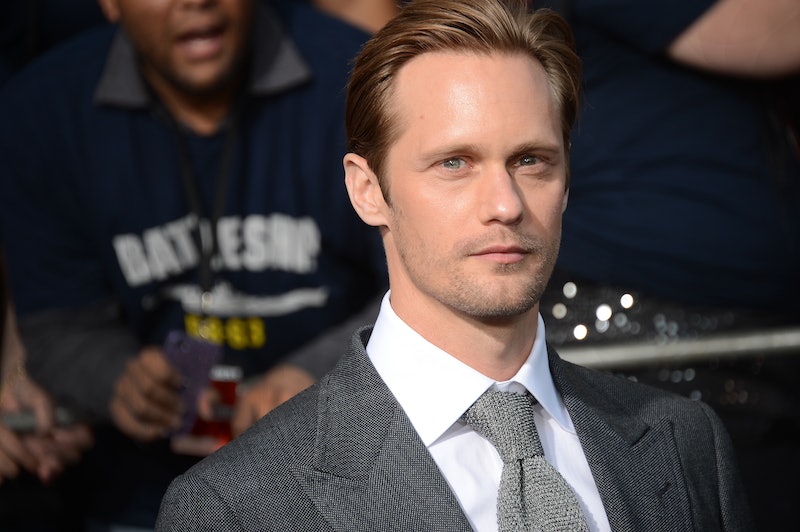 It's been a glorious morning that has given us a music video featuring Adam Levine's naked butt — and that's why I hate to break this development. Hearts will be broken, tears will be shed, and Tumblr will be devestated. Allegedly, super sexy hunk Alexander Skarsgard is no longer single — and Skarsgard is dating British presenter and model Alexa Chung, according to Us Weekly. Unnamed sources have confirmed the romance and the pair have been spotted frolicking in Brooklyn this weekend among flowers at Prospect Park and Botanical Gardens. But as for Skarsgard and Chung themselves, they have yet to say anything about this alleged new coupling that nearly has identical names — Alexander and Alexa.

I guess that makes their couple portmanteau easier — or really rough (The Alexes? AlexaSkars?). No need to worry about that yet, though. There hasn't been official confirmation (social media or otherwise) yet. But the one-time host of MTV's It's On With Alexa Chung did post an Instagram photo from the gardens that's supposedly taken by the True Blood actor during their romantic day together. She's surrounded by roses and it's absolutely gorgeous, because we all weren't jealous of her enough. The pair has also been spotted in Paris together this Spring, dining at romantic restaurants and hanging out with her friends in the city of romance. In addition, ASkars recently sold off his Los Angeles bachelor pad. Could this mean things are getting serious between these two love birds?

Is it me, or does Chung really like guys with similar names to her? The 31-year-old Brit dated another Alex previously — she and Arctic Monkeys lead singer Alex Turner were in a relationship from 2007 until 2011. Skarsgard dated Kate Bosworth from 2009 until 2011.

Until it's confirmed, Skarsgard can still occupy mine — and everyone else's — fantasies, just like this: