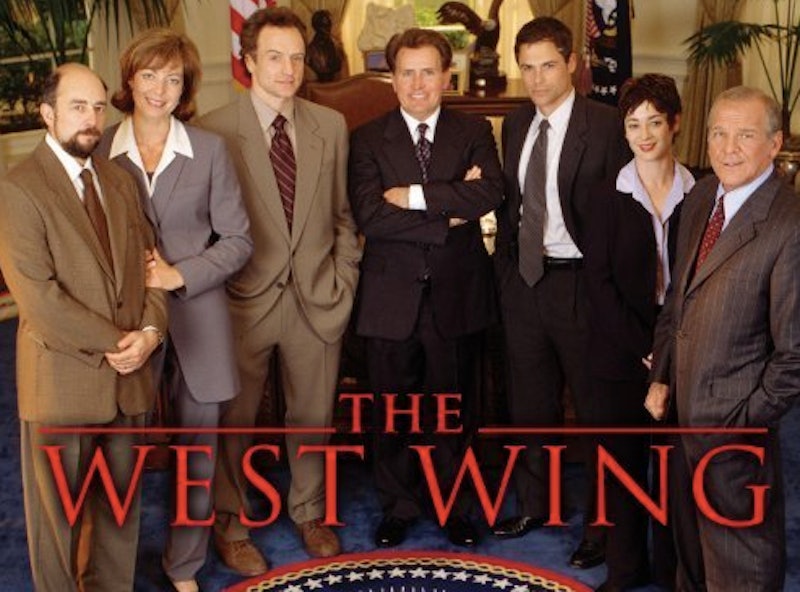 It's been a big night for The West Wing at the Critics' Choice Television Awards on Sunday night, you guys! And no, before you go frantically scrolling through your calendar, I haven't sent us back in time to somewhere between 1999 and 2006, when that show was actually airing, and the series isn't getting some kind of lifetime achievement award, however much it deserves one. In actuality, it's something way cooler, just by virtue of being so random — two of the show's biggest stars have won top awards for their current (and completely separate!) projects. The lucky winners were Allison Janney, who was nominated in the category of Best Supporting Actress in a Comedy Series for her work on Mom, and Bradley Whitford, who was up for Best Guest Performer in a Comedy for his turn as Marcy May on Transparent.

It was cool enough that both Janney and Whitford were nominated in the same year, given their long tenure working together on The West Wing as C.J. Cregg and Josh Lyman, respectively, but the fact that they both won tickles me more than I could possibly tell you. As someone who recently finished watching all seven seasons on Netflix, I don't think I've ever connected quite so strongly with a show on every level, from admiring the acting, to marveling at the depth of the characters (especially the women!), to being blown away by the writing. All of it. It was just a perfectly done show, encapsulated in its own little world, and its the model by which I'll judge all other shows in the future. (Have I made clear enough yet how much I loved it?)

And for those reasons and so many more, it's especially heartwarming and satisfying to me that two of my favorite performers from my favorite show are not only still working in the industry, but still being honored in it, 10 years down the road. Oh and calling out Amazon's proposed use of drones and kissing James Corden full on the mouth while they're at it? Just further proof that these people and that show were the best in the business. *Swoon*

More like this
“The Door Is Always Open” For Another 'Breaking Bad' Spin-Off, Says AMC Boss
By El Hunt
Alicia Silverstone Has Recreated An Iconic 'Clueless' Scene
By Frances Stewart
Drake’s Net Worth Will Have Critics Saying “Honestly, Nevermind”
By Hugh McIntyre
'Stranger Things' Cast Thinks It's "OK Not To Label" Will Byers' Sexuality
By Alyssa Lapid
Get Even More From Bustle — Sign Up For The Newsletter