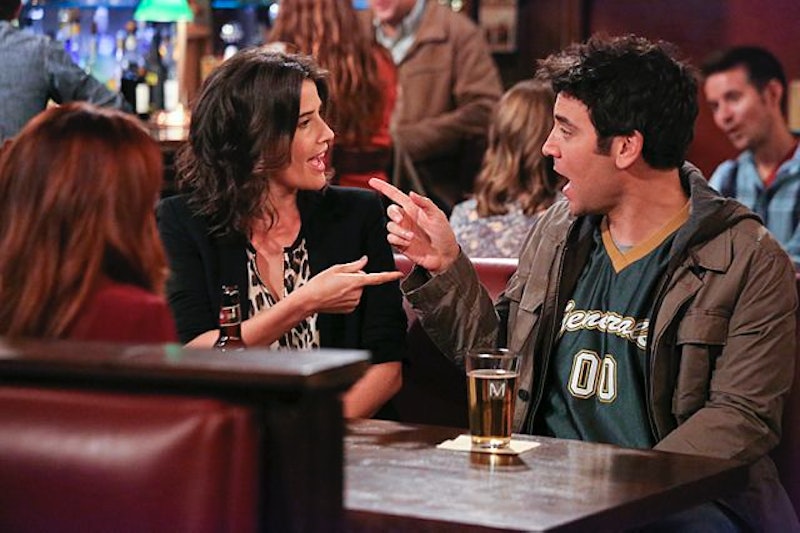 If you've been hating How I Met Your Mother's bottle season, Monday's all-flashback "Platonish" might just cheer you up. (You get to see MacLaren's! You get to see Marshall interact face-to-face with someone other than a guest star or an infant! You get answers about what prompted Barney's crazy Playbook proposal!) However, if you've been hating how inanely ridiculous HIMYM has gotten, well, you might be less cheery. (You get to see Barney pick up women while doing all of the following: Speaking only like a dolphin, wearing a trash bag, not using the letter "e," and pretending to be post-surgery Ryan Gosling.)

But hey, you win some, you lose some right? Let's just dive into the highs and lows of the episode.

High: We're not at Farhamptom

Now, I'm actually not a naysayer of the Season 9 format. I know a lot of eyes were rolled when it was announced that Season 9 would all take place over the course of the wedding weekend, but I was really okay with it. What I'm less okay with are some of the choices that have been made since – like keeping Marshall miles and miles from everyone the entire season. This week's episode was told almost entirely as a long-form flashback, taking us back to Season 8, just before Barney proposes to Robin. It affords us a lot of familiarity for a show that has taken everyone (including the audience) out of their comfort zone for its final season.

Low: The ridiculousness of challenges accepted

The flashback is brought on by one of Barney's semi-infamous "challenge accepted" bits, which prompts Lily to point out that he never made good on his last challenge accepted. The story behind Barney's failure to complete the challenge is actually very sweet, but to get there, we have to endure some bizarre pick-up attempts, even for HIMYM. The nice thing about Barney in the early seasons was that he didn't always succeed at picking up women. His numbers were high, sure, but it was through sheer persistence and effort. Tonight, we were forced to watch as Barney effortlessly wooed a woman while making realistic dolphin noises instead of speaking. I wonder how many showers it takes Neil Patrick Harris to wash off the grime of doing a gag like that...

We thought that Lily was the first of the main five to meet the mother, but we were wrong. While their onscreen meet cute happened first in the series, chronologically speaking, Barney actually met the mother last year. During the challenge he didn't complete (essentially to run errands for Lily and Robin… while picking up a girl), he met the mother, who turned him down flat and instead gave him a hug and told him that everything would be okay. When Barney asks what that's for, she guesses easily that he's distracting himself out of his sadness at losing the love of his life and encourages him to lay it all on the line to get her back. Barney leaves their meeting and immediately goes home to write The Robin play. There's a nice throwaway joke in which the mother admits that she has a boyfriend, but doesn't think he's The One and Barney can't think of anyone to set her up with, but overall the moment is sweet and sincere and human, something HIMYM hasn't been for a while now.

From a storytelling perspective, only half of the flashback makes sense. We're supposed to be in a story Barney is telling, and yet his challenges and revelations play like a subplot to Ted and Marshall's storyline, something Barney would not have been privy to, even after the fact, as it deals entirely with Marshall trying to talk Ted into getting Robin back and the origins of Ted's Chicago job offer. Ted tries to insist that he and Robin are platonic, even as they revive old inside jokes from their time as a couple and he continues to pine for her on a level that should have landed him a restraining order years ago.

At a Harlem Globetrotters game that seems to want to be the wave scene from When Harry Met Sally (but fails), Marshall convinces Ted that he and Robin are meant to be and are only 20 minutes away from getting back together at any given time. Ted reveals that he's already planned an elaborate gesture to get her back (it involves re-stealing the blue french horn), but he doesn't go through with it because he's not sure she would say yes. At the end of the flashback, he sees her eating olives and points out that she told him on their first date that she hates them. She shrugs it off and explains that she changed her mind and this gives Ted hope that maybe they really have changed enough to be right for each other now. He turns down the job in Chicago (but is told the offer is always on the table) and resolves to let his future with Robin unfold naturally this time, foregoing big gestures. Shortly after this, in the timeline of the series, Barney proposes with a gesture to end all gestures.

This might be a long way of saying it, but I'm so over Ted not being over Robin. We've known since the pilot that Robin was not the mother. We've known all along that she and Ted were not going to work out. And now, she's roughly 30 hours away from marrying his best (okay, second-best) friend. Ted's obsession with Robin has never been cute in a meant-to-be kind of way, because we've known all along that they are not meant to be. It was endearing at first to see how deeply Ted believed in true love. It made his quest to find his wife believable and his relationship with Robin interesting and complicated, but at this point, it's hard to like Ted, let alone respect him, when we know that he's still so hung up on a girl he has no business pursuing.

This has been a big part of HIMYM's problem since the Stella storyline — Ted has lost his likability. He gets a lot of it back in the flash forwards with the mother, but, for now, I'd love to see him really let go of Robin and be in an emotional place to meet someone by this finale. Is that too much to ask?

More like this
Kaley Cuoco & Tom Pelphrey Just Made Their First Public Appearance As A Couple
By Hugh McIntyre
What Does Michael Peterson’s Family Think Of 'The Staircase'?
By Arya Roshanian
Everything To Know About ‘The Handmaid’s Tale’ Season 5
By Amanda Whiting
The 'Grey’s Anatomy' Season 18 Finale Might Have Had A Sneaky April Easter Egg
By Grace Wehniainen
Get Even More From Bustle — Sign Up For The Newsletter