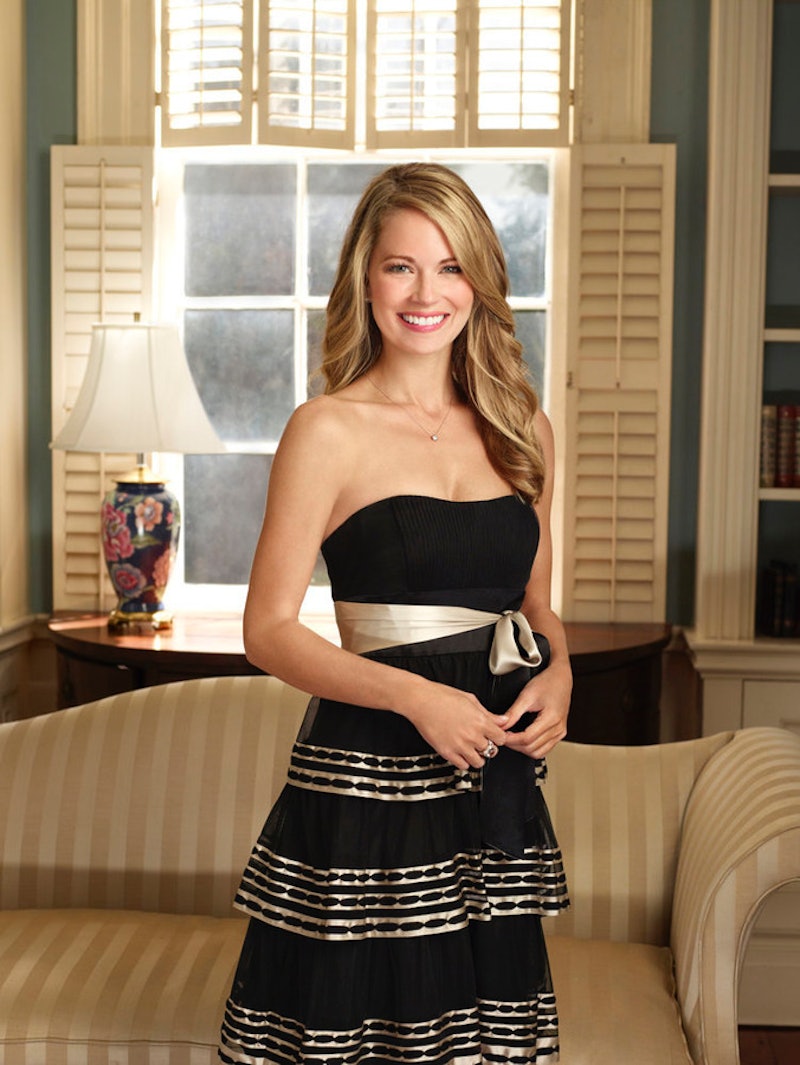 The insane amounts of drama may be at the center of Bravo's Southern Charm, but I watch the show for a totally different reason: Cameran Eubanks. In the midst of the craziness that surrounds her (especially where Kathryn and Thomas' relationship is concerned), she's constantly the voice of reason — even if no one will listen to her. But, I don't just love Cameran because she's the voice of reason on Southern Charm; I also love her because I desperately want to trade faces with her. Cameran is beautiful, and while a lot of that can be chalked up to DNA and her natural good looks, she also puts in the work to appear flawless on TV. And after a little bit of digging and plenty of Southern Charm watching every week, I've discovered Cameran Eubanks' beauty habits are definitely something the rest of us can learn from.

Because let's face it — it's probably unlikely that Cameran is going to show up at my door, offering to do my makeup for me and teach me all of her best hints. Even though she's totally invited. So, if you're loving Cameran's look as much as I am, add these beauty habits into your regular routine. If you're going to adopt anyone's beauty regimen, it might as well be hers!

If you want to look like Cameran, you might as well delete your Pinterest board filled with recipes for homemade facials and sugar scrubs, because in an interview with Charleston Grit, she revealed that she definitely doesn't believe in DIY beauty, and her reasoning actually makes a lot of sense. "I'm not mixing anything from my kitchen to put on my face," she said. "It doesn't work. I don't care how many articles you read. You need active ingredients to see results."

Sleep In Your Mascara

OK, so maybe don't take this hint literally — but you can still shop for Cameran's favorite kind to emulate her lashes. In the same Charleston Grit interview, she revealed that after trying all different kinds, she's fallen in love with Trish McEvoy High Volume Mascara and loves it to the point that she sometimes sleeps in it to protect her lashes. I'm going to keep washing my face before bed, but you do you, Cameran.

Roll Your Eyes At Drama

Notice how Cameran's face is free of worry lines? It's because she chooses to laugh at the insanity going on around her instead of getting involved in it. This undoubtedly has added years to her life and is very beneficial to her skin.

I never really considered wearing pink lipstick until I saw how well Cameran pulled it off for an every day look, and now I'm in love. I'm convinced it will look good on anyone.

Regardless of the event Cameran's attending, her makeup look is always very natural. Since I've never been a fan of heavy makeup, I really like that about Cameran. If you're going for her look, you're probably going to want to choose from natural palettes, even at night.

Like Cameran says in her tweet, it's the best — but you are going to pay for it. Geurlain's BB Beauty Booster is $56 a bottle. Yikes!