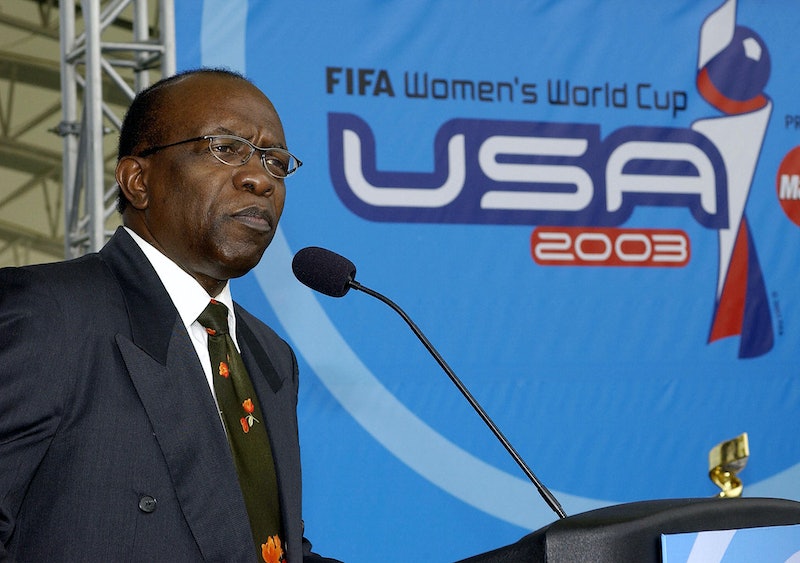 Some FIFA executives are fighting to restore their reputations — like former FIFA Vice President Jack Warner, who posted an eight-minute video defending himself on Sunday. Unfortunately, his defense wasn't exactly based on hard facts: Warner's video cited a fictional article from The Onion. Oops.

Warner was one of the nine top FIFA executives arrested in May on various charges of racketeering, wire fraud, and money laundering. One of the most noteworthy allegations is presented in a 164-page indictment, which contains allegations that Warner, Chuck Blazer, and an unnamed third FIFA executive accepted $10 million in exchange for them voting for South Africa to host the 2010 World Cup. Warner and Blazer have denied charges of bribery.

However, Warner, who hails from Trinidad and Tobago, did not help his image much with the video posted to his website. He distanced himself from FIFA and cited inaccurate information. He said:

How is it that FIFA is 100 years old, I entered FIFA when it was 70 years old, I left FIFA four years ago, I am the youngest person in the smallest country ever in the world that reached that far in FIFA. How is it that I can be responsible for any perceived culture of FIFA? How is it that the whole world expects me to have the influence to change a World Cup bid?

Warner reached an embarrassing point when he held up a copy of satirical newspaper The Onion and referenced one of its fictional stories that claimed FIFA was in a hurry to announce that the next World Cup would be held in the United States. He said, "If FIFA is so bad, why is it the USA wants to keep the World Cup? Why is it USA authorities sought to embarrass FIFA in this way? Something has to be wrong.”

The former executive soon deleted the video, but it was quickly uploaded to YouTube, according to NBC Sports. However, Warner's embarrassment is not completely uncommon. Here are eight other examples of others who thought The Onion's news was legitimate, because it's more than just people on your Facebook feed.

The former leader of the Westboro Baptist Church posted an article by The Onion entitled "'98 Homosexual-Recruitment Drive Nearing Goal" that claimed the LGBT community was on a mission to convince straight people to become gay. Phelps angrily cited this article as part of a gay conspiracy to convert heterosexuals, according to Wired. Phelps never seemed to realize or care that his evidence wasn't true.

The Onion published an article in 2011 about a fictional hostage situation in the Capitol building and began live tweeting. Many people retweeted and didn't realize that the story was untrue. Capitol Police even launched an investigation, according to the Los Angeles Times. Police quickly realized that it was a hoax.

Television personality Stephen A. Smith was the subject of an article by The Onion that claimed he was ready to have an argument about sex with his son as a way to comment on Smith's argumentative nature. Smith tweeted his anger over the story, saying he didn't have a son but later realized the truth and tweeted, "Haaaaa. The [sic] got me. I didn't know it was on Satire! Got it. Peeps got jokes. It's cool!"

Abortion By The Wholesale

Republican congressman John Fleming of Louisiana shared an article from The Onion titled, "Planned Parenthood Opens $8 Billion Abortionplex." Fleming wrote, "More on Planned Parenthood, abortion by the wholesale." Like Warner, Fleming quickly deleted the post, according to The Huffington Post.

Fleming wasn't the only one to use a satirical article for political purposes. The Mecklenburg County, Virginia, Republican Party organization made a similar mistake by sharing an article about President Obama's fake hidden 19-year-old son, which included a photoshopped image. Pat Mullins, chairman of the Republican Party of Virginia, spoke to The Washington Post to rebuke the Mecklenburg County chapter: “These kinds of images have no place in political discourse — period. They are offensive, tasteless and should never have been posted anywhere, let alone a local unit’s Facebook page. The Republican Party of Virginia condemns this sort of imagery in the strongest possible terms.”

For a health story on her MSNBC show, Deborah Norville cited data from The Onion that said 58 percent of all American exercise is televised, according to The Charleston (W.Va.) Gazette. The story said that that figure includes 2.03 billion of the 3.5 billion sit-ups done during the previous year. Norville doesn't seem to have commented on the mix-up.

An article by The Onion about the Harry Potter series led to parents believe that the books were a cause of a rise in satanism in children. The fake article even quoted High Priest Egan of the First Church of Satan in Salem as saying:

Harry is an absolute godsend to our cause. An organization like ours thrives on new blood—no pun intended—and we've had more applicants than we can handle lately. And, of course, practically all of them are virgins, which is gravy.

The article went on to spark email chain messages and parental disgust for years. Some parents used it as a reason to petition a ban of the series.

Fox News Forgetting How To Do News

Fox News reposted part of an article by The Onion in Fox News' culture section that said President Obama had sent out a 75,000-word email that complained about the nation. When reposting, Fox News neglected to inform readers that the story was untrue, sparking many inflamed comments, according to Mediaite. It's unclear whether the news outlet realized that the story was satirical, but the site took down the post and comment feed.