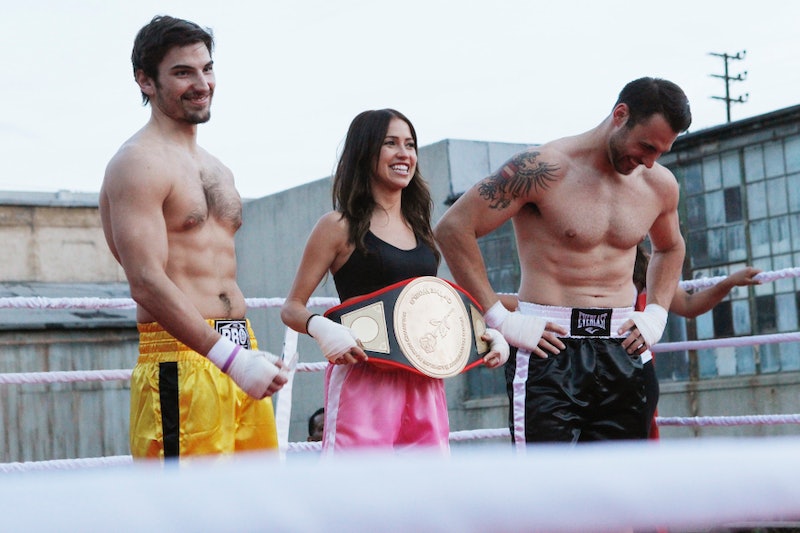 After watching the Bachelorette Season 11 promo once Kaitlyn Bristowe was chosen, I felt pretty upset. It seemed like The Bachelorette contestant were majorly slut-shaming Kaitlyn by making it seem like having sex with a guy you've been dating for a month is the worst decision a woman could possibly make. A huge, sob-worthy, record-screeching mistake that will make Kaitlyn no longer worthy of her eight remaining contestants' love. Or, so implies the Season 11 trailer with Kaitlyn admitting she had sex.

But, having sex before Fantasy Suites, and their Chris Harrison stamp of sex-approval, is a "mistake" that's happened plenty of times on The Bachelor franchise. The thing is, though, the times that have been documented on camera have all been on Bachelor seasons... you know, the version of this show that has a man in charge and dating 25 women. So, when a man sleeps with a woman while dating a bunch of other women, that's fine; but, when a woman sleeps with a man while dating a bunch of other dudes, she then needs to tell all those other dudes that she's defiled herself and brought shame to their shared household.

And what about the man that she sleeps with? Oh, he'll be off the hook because — we've been over this — the woman is always the one who needs to monitor and assess the situation in order to avoid pre-Fantasy-Suite-coitus at all costs.

No, no of course I don't actually think that. But The Bachelorette seems to think so. Let's take a look back at other alleged Bachelor sexscapades and the resulting fall-out.

OK, the case of Juan Pablo and Clare, and the terrible psychological trap she found herself in until the finale can't entirely be blamed on The Bachelor franchise, because wherever Juan Pablo found an opportunity to mishandle a situation, he would; and wherever The Bachelor editors found an opportunity to show off how much of an ass Juan Pablo could be, they would. But, Juan Pablo was never shown feeling an honest ounce of shame for the alleged sex jaunt in the ocean he shared with Clare... no, the tears and accusations of setting a bad example for Juan Pablo's young daughter were all reserved for Clare. Because women can't have sex unless men tell them it's OK first, duh!

The actual happenings of JP and Claire's time spent in the ocean have always remained vague, but Ben and Courtney invented the mic-less ocean jaunt. Once Courtney's tell-all book came out, it was as clear as the Caribbean ocean what went down (for all of 20 seconds, apparently) in their pre-Fantasy-Suite rendezvous. So, of course, the other women began hating Ben for having secret sex with only one of his girlfriends and the show let it be known that his behavior in the ocean was not to the moral standards of The Bachelor.

No, no that's not right... everyone hated Courtney and to this day she's considered one of The Bachelor's most notorious villains for luring innocent, boring Ben into the ocean with her siren-like lady ways.

But sex in the ocean is child's play compared to what Bob Guiney was allegedly getting up to on Season 4 of The Bachelor, when promos edited within an inch of their lives were but a glimmer in Chris Harrison's eye. In an interview in A Drink With, Bachelorette sweetheart Ali Fedotowsky (she only had sex with one man, and at the appropriate time, you see), said that series creator Mike Fleiss told her that, "Bob Giuney had sex with like 16 girls or something on the show... he went in the bathroom during dates to have sex with the girls!"

So, since The Bachelor seemingly disapproves of their contestants having sex before Fantasy Suites, they probably really don't like that sex-having Bob Guiney, right? The show will probably handle this Kaitlyn/mystery-contestant-coituser thing with care, making sure that both parties share equal responsibility in violating the show's unspoken rules about only having ocean sex so you can't get caught, right? The past is telling us that Kaitlyn won't totally get slut shamed while the guy comes out a hero for scoring early, right???

On ABC's Inside the Bachelor 20/20 special that aired in 2010, when asked who held the "highest batting average" sex-record for the show, Fleiss excitedly responded, "That's my man, Bob Guiney!"

So, everyone better just agree to support, Kaitlyn, OK?

More like this
‘The Bachelorette’s Michelle Young & Nayte Olukoya Explained Their Breakup
By Stephanie Topacio Long
Daryl McCormack On His Unusual First Audition With Emma Thompson
By Olivia-Anne Cleary
Howard Stern's Net Worth: Is He The Richest Man In Radio?
By Hugh McIntyre
Kris Jenner Drunkenly Toasts Khloé Kardashian’s 38th Birthday With This Speech
By Grace Wehniainen
Get Even More From Bustle — Sign Up For The Newsletter