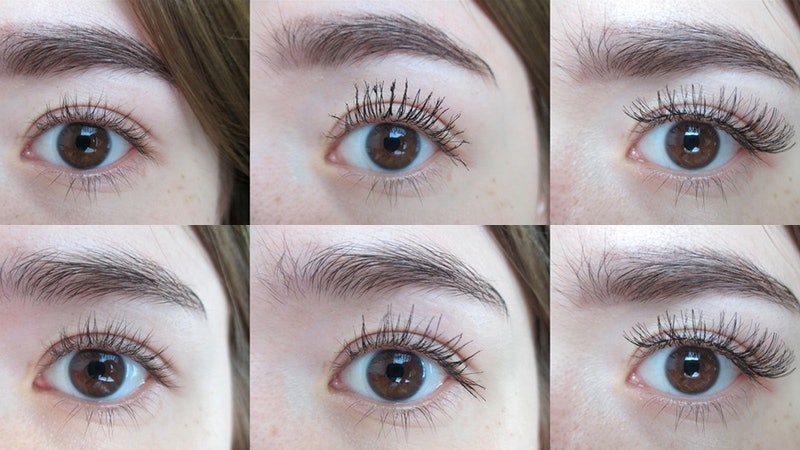 The effect of false lashes can be game changing, whether worn alone or with a dramatic smoky eye. Sometimes (or most times), however, we're just too lazy to deal with all that messy glue and waiting around for it to get perfectly tacky. So, which mascara actually looks like false lashes? Tons of brands on the market claim to give a false-lash effect, isn't that claim just a little too bold? Maybe they really are increasing length and volume by nine thousand percent. But I doubt it. Especially because so few mascara labels actually explain what it is about the formula that is causing this significant increase.

So when I want a mascara that's going to mimic the look of false lashes, I'm more trusting of formulas that have physical evidence of the change they're making (or can at least explain what the formula is supposed to be doing). To this purpose, I put four different types of mascaras to the test: fiber-infused, two-step fiber, expanding, and tubing.

Of course no mascara is going to be able to add new lashes like a pair of falsies will (especially depending on the type), but ones that include fiber, expanding, or tubing technologies can come close to mimicking the added volume and length. Keep reading to find out which of these six performed the best.

This mascara features fibers within the formula that are up to four millimeters long and adhere to natural lashes to give them extreme length. While the mascara definitely gave me the length (if not more) of false lashes, it was quite nice for a more natural daytime look.

This lash kit features two products where one full application consists of applying one coat of mascara, then one coat of fibers, then another coat of mascara. In this way, the fibers are attached to the lashes by being sandwiched between two coats of mascara. There is definitely a bit of a learning curve with this type of application, and one has to work quickly for the fibers to properly adhere to the mascara. Something else to keep in mind is that with these types of mascaras, after a fair amount of usage, some fibers will end up in the mascara tube. Depending on the formula and how many fibers have contaminated the mascara, this can make clumping more of a problem later in your usage. To somewhat account for this, I made sure that the pictures of these mascara applications were not from the first time I used the products. However, they definitely give noticeable volume and length, making the appearance more similar to false lashes than one-step mascaras. Of the three of this type that I was able to try, this one was prone to making my lashes somewhat stick together.

Another two-product kit, this mascara and fiber duo came in a more convenient double-ended applicator. Of course this means there is less product, but it is more travel-friendly. Of the three mascaras of this type, this was my personal favorite (although I am slightly biased because Lights, Camera, Lashes is one of my favorite mascaras of all time). I felt it offered the best separation in addition to the volume and length. Even with the trickiness of the fibers, clumping was not a problem.

This set was the last of the two-step fiber mascaras. Although it does still offer a good amount of volume and length, this mascara was a little more prone to clumping than the previous two. That makes it perfect for the Twiggy look that's become so trendy again.

This mascara features an air polymer powder that is supposed to expand while maintaining the shape of lashes. Although it provided amazing length and is totally clump-free, I did miss a little volume that the two-step fiber mascaras were able to provide.

Tubing mascaras perform mostly how the name implies. That is, the formula forms casings, or tubes, around each lash to give it volume and length. And of course, each coat can continue to form a tube around the previous tube. Although the volume and length are there, the volume is still not quite what the two-step fiber mascaras provide, and it was slightly prone to clumping.

Overall, if you're looking for a mascara that can most closely mimic the look of false lashes, a two-step fiber mascara is the way to go. But if you don't like the idea of having to use two separate products to achieve full and thick lashes, opt for a regular fiber, tubing, or expanding mascara. Or, of course, you could get really, really good at applying falsies.