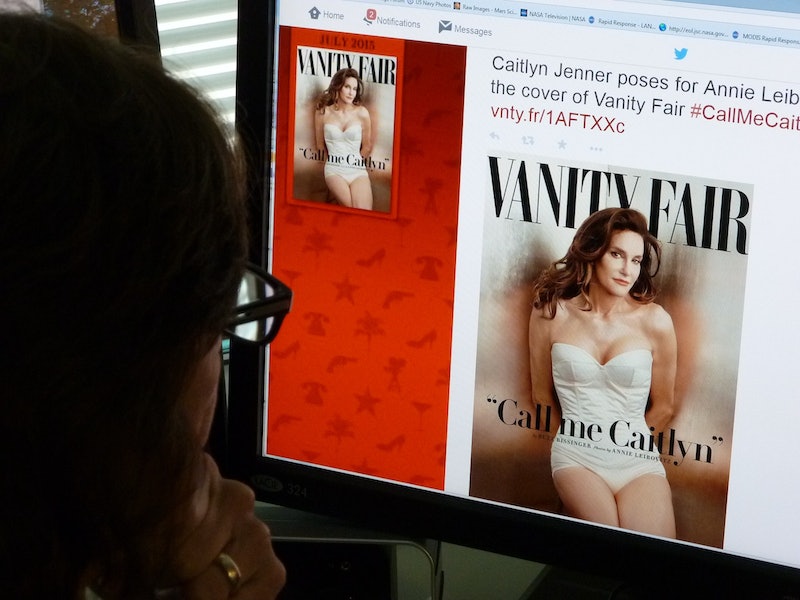 On Monday, the Olympian and reality star that Americans have known for decades as Bruce Jenner made her debut as Caitlyn Jenner on the cover of Vanity Fair's July issue. During a two-hour session with famed photographer Annie Leibovitz, Jenner compared her photo shoot to winning gold metals in the 1976 Olympics. She tells Vanity Fair, "That was a good day, but the last couple of days were better ... This shoot was about my life and who I am as a person. It’s not about the fanfare, it’s not about people cheering in the stadium, it’s not about going down the street and everybody giving you ‘that a boy, Bruce,’ pat on the back, OK. This is about your life.”

I've often referred to the Jenner experience as the Super Bowl for the transgender community. It's an event that has captured people's attention all over the world, and it's furthered discussion of the transgender experience among the American people in a way that is both meaningful and educational. Here are five reasons the introduction of Caitlyn Jenner in the July issue of Vanity Fair is such an important moment for the greater LGBTQ+ discussion.

1. She is bringing increased awareness to the masses

In a single instant, Caitlyn Jenner did what many of us have been trying to do, baby step by baby step, for decades; She brought awareness of the transgender community to an enormous audience that previous efforts may have not reached. Positive exposure for the transgender community comes in small doses, but with this announcement by Vanity Fair, along with the previous 20/20 interview, the general public is finally being exposed to and hopefully beginning to grasp the complexities of being transgender. Increased awareness will lead our community towards being accepted and away from being the exception.

2. She is living authentically in public

People often refer to people who are transgender as courageous for embracing their "journey." Living authentically as yourself is not in itself brave so much as it is necessary, and it brings an overwhelming sense of relief and calmness. The cisgender population needs to know that living, presenting, and transitioning publicly and authentically often comes with a price tag in the form of loss of family, friends, careers, or respect. In Jenner's case, living authentically came with decades of internal struggling, a failed transition in the 1980s, and a litany of public mockery. Most people in the transgender community experience some form of these struggles,

But despite that fact that her transition was difficult and emotional, Caitlyn is not your average trans woman. She is a wealthy, white, successful woman with the financial means to make a spectacular "coming out" debut, and some may complain that she should not be the face of the trans community because she does not accurately represent their plight (high suicide rates, high murder rates, high poverty rates). But we as a community need to have trans women occupying that level of the society, so that they have a platform from which to highlight the struggles of the trans community and the inequalities within said community, all while showing the public that we are not all sex workers and objects of fetishism.

3. Her family is demonstrating acceptance

Coming out as transgender often results in rejection from one's family, and that is something Caitlyn was well aware of. In her 20/20 interview with Diane Sawyer, she said she asked herself, "How do I do this and not tell my children?" Although Kris and Khloe Kardashian took the news the hardest, they have since become Caitlyn's biggest cheerleaders. Jenner has now shown the American people that retaining a family while coming out as transgender is something that is actually possible. As a woman who is transgender, I have retained my family structure, and I believe that having a supportive family only helps diminish the stigma that people who are trans are unable to be parents, wives, fathers, mothers, sisters, brothers, uncles, and aunts.

4. Honesty over her struggles and phobias will help others deal with their own biases against transgender people

Struggling silently has created a national epidemic of suicide in the transgender community. Forty-one percent of people who are transgender have attempted suicide — 12 times more than the cisgender population. In both the 20/20 interview and the new Vanity Fair article, Jenner has placed all of her insecurities, struggles, and phobias on the table for everyone to see and pick through. By allowing the public to see what we as people who are transgender struggle with on a daily basis, she is inviting others to face their own fears and help them deal with internalized transphobia and uncertainty of our community.

5. Her words are inspirational and life affirming

"I'm saying goodbye to people's perception of me and who I am. But I'm not saying goodbye to me. This has always been me," Caitlyn says. "Please be open-minded. I'm not this bad person. I'm just doing what I have to do."

We all need to do what we have to do in order to keep ourselves alive. The science is in and being transgender is not a choice. In many cases, it comes down to a "transition or die" decision, and sadly many of those struggling with gender dysphoria choose the latter. Caitlyn tells Vanity Fair, “If I was lying on my deathbed and I had kept this secret and never ever did anything about it, I would be lying there saying, ‘You just blew your entire life. You never dealt with yourself,’ and I don’t want that to happen."

That is a fear all transgender people have, and Caitlyn stating this candidly and publicly is an inspirational, affirming act. There is not one person who is transgender or gender non-conforming that hasn't thought, "what if." What if I don't transition, what if I don't become the person I was born to be, what if at the end of my life I look back and say, "what if." Hopefully her optimism and insight will help other transgender people who are deciding whether or not to transition see the light at the end of the tunnel.

Congratulations Caitlyn. You not only look wonderful, but you finally look happy.