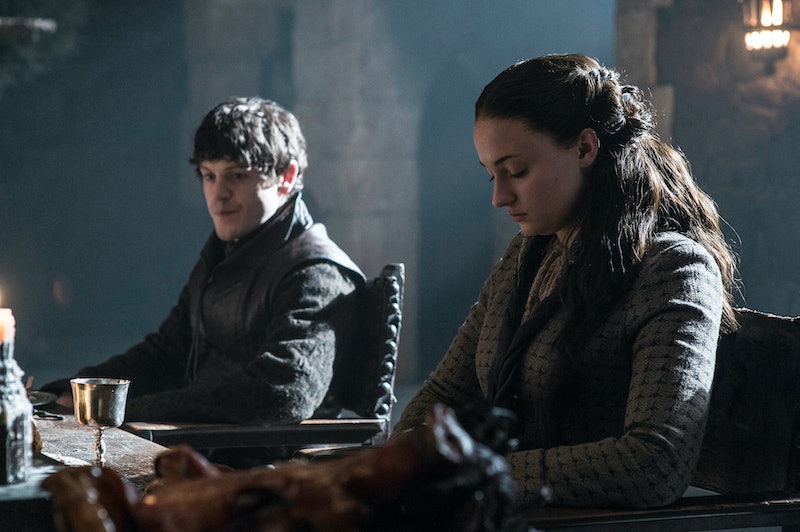 Sansa Stark entered the Game of Thrones as a player this season, but we've yet to see the extent of her ruthless side just yet. She has more enemies than her sister Arya at this point. Who is Sansa going to kill on Game of Thrones? After getting some hopeful news in Sunday's episode "Hardhome" about the fate of Bran and Rickon, I have a feeling that we're going to see a renewed energy from the eldest Stark girl.

Don't get me wrong. I would love it if Sansa was able to ascend to power, stability, and happiness without having to take a single life. One of the reasons why Sansa Stark is a favorite of mine in this series is because she represents the value of strong female characters that don't resort to more traditionally masculine shows of strength or cruelty to make their way in the world. As Tyrion said in the middle of last season, Sansa is not a murderer... yet. Still, I'm not naive enough to think that Sansa is going to make it through this whole series without offing someone with her own hands. I'm fascinated, if and when it does come to pass, what her methods will be.

Thankfully, many of Sansa's enemies have already been killed — Tywin Lannister, Joffrey Baratheon, and Lysa Arryn to name a few. However, speaking hypothetically, if Sansa Stark were to keep an index of her enemies, and the opportunity did present itself, these are the names she would probably recite at night, ranked.

Am I a monster for suggesting that Sansa kill off her little cousin? He may be a boy, but he's a dangerous boy who was raised by madness and has a strong affinity for making people "fly." If Sansa wants to be safe in the North, she's going to need to

Personally I think Arya's got this one covered, but Sansa has as much reason to want to kill the man who beheaded Ned Stark as anyone else.

I'm still a little hesitant to suggest Sansa murder a potential female friend, even one that is both bloodthirsty and jealous of Sansa's status and position. However, the young Lady Stark knows that she needs to stay wary and trust no one. Myranda's death could easily be a consequence of her own self-defense.

This is the guy who stripped and beat Sansa in front of Joffrey in the throne room at King's Landing. I know he's on Arya's list as well, but this time I think Sansa has a better claim. Once she's honed her murder skills, I suggest Sansa go after him and get revenge.

Please, it's the kinder thing to do. It's too sad to watch what has become of Theon Greyjoy anymore. He still betrayed the Stark family. Unless Theon wants to sacrifice himself for redemption, I wish Sansa would just put him out of his misery.

The Queen Mother (or whatever we're calling her these days) is already in a heck of a lot of trouble, so I don't want to pile on. However, Sansa was nothing but kind to Cersei and got no help in return. She may have given Sansa some valuable lessons but also put her down constantly and threatened to kill her during the battle of Blackwater. There aren't many who are worthy of killing Cersei Lannister, but Sansa could do it.

The man who killed Catelyn Stark is Walder Rivers, the bastard son of Walder Frey. Lord Frey orchestrated the Red Wedding with help from Tywin Lanniser and House Bolton. It would take an army to take down such a large and twisted house, but Sansa Stark should lead it.

Not many people trust Littlefinger, but nobody quite knows how twisted he can be other than Sansa Stark. If she really wants to be safe in this world, she needs to ditch this "protector" who isn't afraid to use her as a temporary pawn to achieve his ends. He might be the villain of this whole series, and Sansa could be the heroine we need to take him down.

I'm tempted to put him first, but this is Sansa's list, not my own. Roose Bolton stabbed Sansa's brother Robb. His whole house is clearly a sadistic bunch. Say what you will about Ramsay, but he didn't come up with the idea to flay people on his own.

He is Sansa's current abuser. He purposely withheld hope from her and brutally murders those who support her. He's not stable or safe to be around. It's time for Ramsay to die. The best way for Sansa Stark to get revenge on her new husband is to do it herself.