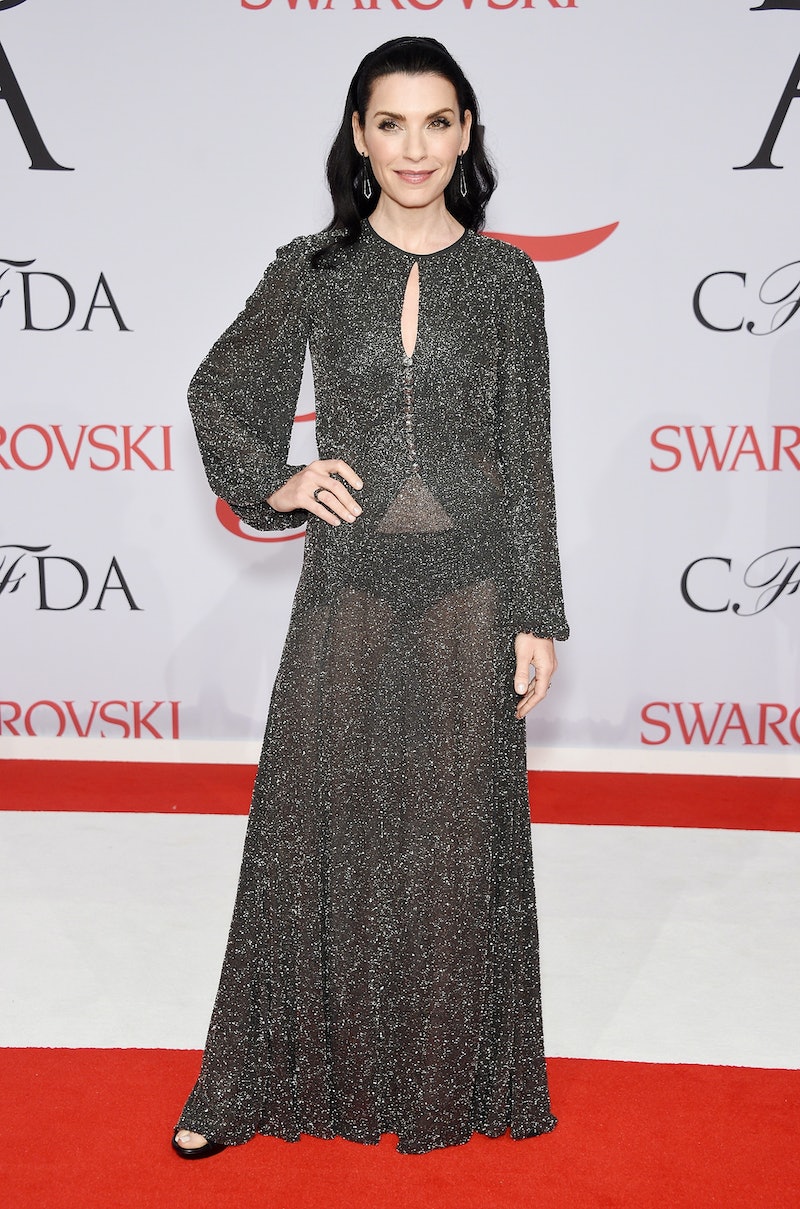 Even if you don't remember last year's CFDA awards, odds are you probably do recall Rihanna's see-through gown on the 2014 CFDA red carpet. Yes, that gown. The see-through, embellished shiny dress (and matching headpiece) that pretty much broke the Internet right then and there. It's hard to forget. So for the 2015 CFDA red carpet, the standards were high. And while there hasn't been a stand-out moment like Rihanna's see-through dress, there were a couple memorable exposed underwear gowns from Kim Kardashian and Julianna Margulies.

Don't worry; it's all more fashionable than it sounds at first. Any way you say it, 'underwear' or 'panties' just doesn't sound chic, I've found. Kim Kardashian's look wasn't a huge surprise; it pretty much looked like a new version of every other, super fashionable dress she wears. The black, skin-tight look was embellished, see-through, and showed off her famous curves. Underneath the dress, you can see black shape wear peeking through. It's a solid look, and so very Kim K. And a pregnant woman wearing a revealing outfit? I'm all for it. You work that baby bump, Kim.

A more surprising underwear sighting came from Julianna Margulies, who wore a gown that sort of, kind of looked like Kim's. For Margulies' ensemble, though, her bra wasn't visible, while her simple pair of black underwear were showing. Even if this look isn't your cup of tea, it's pretty daring and empowering for a 48-year-old woman to bare it all on the red carpet. And frankly, it's just pretty awesome in general.

I mean, maybe underwear is really the long-ignored red carpet accessory that's been missing from the fashion world. I guess only time will tell. In any case, the fact that the two women on the red carpet who did show off their undergarments were pregnant and over the age of 40, respectively, is pretty inspiring. Revealing and bold looks aren't just for your typical, cookie-cutter red carpet star anymore. Move over, societal standards; underwear looks good on everyone.

More like this
Ruffles, Velvet, Puff Sleeves, And More Plus-size Trends At The 2022 Emmys
By Dominique Norman
All The Great Looks From The Bloomingdale's 150 x Bazaar Icons Party
By Allie Fasanella
Harry Styles’ Red Carpet Looks Have One Thing In Common
By El Hunt
The Best Seamless Underwear To Banish Panty Lines Under Tight Clothes
By BDG Commerce
Get Even More From Bustle — Sign Up For The Newsletter