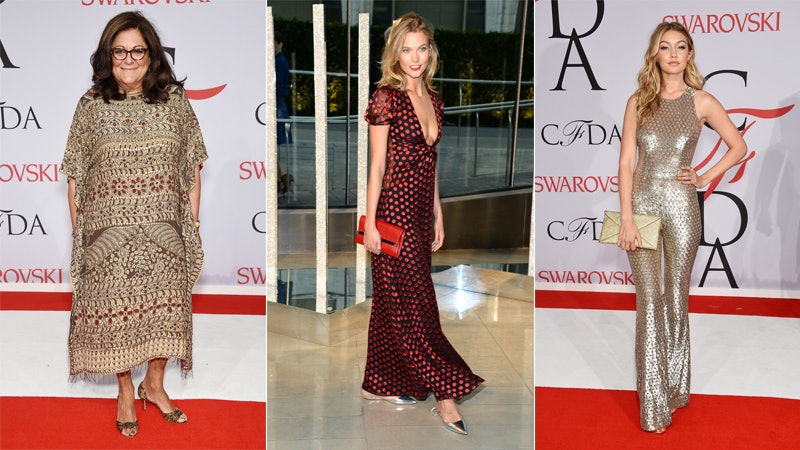 If there's anything that's been trending of late at major celebrity awards nights, it's body positivity on the red carpet. From the Met Gala to the Billboard Music Awards, we've been seeing a lot of sheer, a lot of strategic cutouts, a lot of love for fuller-figures, and even a lot of binary-breaking. And it's been divine.

Of course, the problematic aspect of correlating efforts in body positivity to "trends" is that the word "trend" in and of itself suggests a certain sort of fleetingness. In fact, trends are all about the "temporary." Whether we're talking about decade-based fashion (hello, '70s comeback circa 2015) or "how cool it is to be gluten intolerant," trends are called trends for a reason: They don't last. Body positivity, however, has to last.

In actuality, the size acceptance movement has been around for over 50 years, but it's arguably been social media that has thrown it into the spotlight. From fashion bloggers sharing #OOTD posts to body image activists delivering hard-hitting imagery, facts, and arguments, there's no doubt that Facebook, Twitter, and Instagram have facilitated the conversation — or at least introduced a hell of a lot of people to it who wouldn't have known anything above the movement had it not been for that Tweet of Tess Holliday's People Magazine cover.

I'm not so naive as to think that Kim Kardashian's sheer-in-all-the-right-places gown (which she wore despite having a body that differs from the size-2-societal-beauty-standard mold) or that Rita Ora not wearing any underwear are moments that will revolutionize fat acceptance and body positivity. I mean, neither is even a vocal member or proponent of movements in size acceptance, and both are still widely perceived as bombshell, beauty-standard-adhering beings by the majority of the mainstream. But every little helps.

Because the thing is, every time a woman is unapologetic about her body, about the infinite number of ways there are to be a woman, above loving her curves, about feeling like a sexy goddess in her own skin (not in spite of their differences, but because of their differences) — all that helps. Because body positivity isn't just about the "plus-size effort." It's for everyone. It aims to end age ageism, sexism, racism, homophobia, sizeism, and any other oppressive force resulting in the marginalization of groups of people.

So that being said, here are the most body positive moments of the June 1 Council of Fashion Designers of America Awards:

There's something quite special about a woman unafraid of dressing like the Queen (Swan) Mother, and the 41-year-old actress is reminding us that embracing your inner fairytale creature isn't just something "for the kids."

Flamboyant, feathery ensembles are definitely what many would class a "fashion risk" — one of the various looks you seem to hear people claim that they "can't pull off" — but Lewis proves them all wrong. If you want to dress like a magical swan being, you can and you should. No restrictions.

Red carpets still seem to go hand in hand with the notion that women have to wear floor-length ballgowns and go all-out, Glamazonian for the event. Obviously, that's super sexist. And obviously, it's super boring. But tonight the pop singer and American Idol runner-up reminded us that rules were made to be broken.

In what is probably the greatest longline, cap-sleeved blazer of all time, and a beautifully monochromatic crop top and maxi skirt, she slays. But most of all because she reminds us that there are more ways to express one's own femininity than traditional tulle.

Could it be? Is the universe finally beginning to understand that favoring comfort over glam-ness shouldn't be frowned upon? Insert "praise hands emoji" y'all, because your favorite 22-year-old fashion model wore — you guessed it — flats, with a plunging, polka-dotted masterpiece of a dress. So:

Karlie, thanks for reminding the world that you don't always have to sacrifice comfort for fashion (although hey, if you want to that's totes cool, too).

I've said it before and I'll say it again: When women choose to show off some skin on their own terms, it can be hugely empowering. And I'm all about tummy love, whenever and wherever. Kirk's cute tummy cutout is strategic and elegant, bold and fun.

Not unlike humans, the greatest fashions always seem to be the ones that are an eclectic mix of personality traits. And in this ensemble, both Kirk and her grown prove the sentiment to be true.

The Executive Director of the CFDAs, Fern Mallis never strays away from a fashion risk. Bold prints are something many women of all ages and sizes tend to deem "unflattering," but Mallis is a prime example of the fallacy of this claim.

The loose, flowing nature of her dress means it isn't form-fitting or body-hugging. It's not about "highlighting your assets" or "showcasing your curves." It's comfortable. It's graceful. It's divine. And it's bold. It doesn't care about "rules for women" or "rules for women above age 60." It just exists in blissful, sartorial heaven whilst being worn by a badass babe of a woman.

"What is this outfit?" you might be asking. Well, it's Gigi Hadid's hybrid jumpsuit, of course! Its flared bottoms are totally '70s while its body-hugging, spandex-y texture screams '80s disco.

Allowing the world to see the most intimate curvature of your bod isn't an easy feat — no matter the body you have — considering our not-so-subtly judgmental, aesthetics-obsessed culture. So props to Hadid for opting for something so rad, so shiny, and, well, so tight.

7. Julianna Margulies Wearing So Much Sheer

Um, who was it who said that women over 40 shouldn't really be "taking fashion risks anymore?" Well, whoever the fool was, 48-year-old actress Julianna Margulies just stomped all over 'em (metaphorically, of course. No violence, guys).

Margulies' gown — with her adorable, solid black undies underneath — might just be my favorite look of the night. She's defying agist stereotypes, showing off her confidence, and killing the black-on-black-in-summertime game. Consider my heart melted.

It can be difficult to take a fashion risk when you know that they eyes of hundreds (if not thousands) of spectators will be on you. But that's precisely what makes breaking the "safe fashion" rules so body positive. When you dare to be yourself — no matter who will be looking, or what they will be saying — well, it's a pure act of self-love.

Monae's cape dress tonight is unique, it's kitsch, it's loud, it's different. And it's a brilliant little shout out to the fact that difference is what's truly beautiful.

More like this
10 Stylish Plus-Size Boots That Will Fit Wide Feet & Calves
By Dominique Norman
Sydney Sweeney Just Revived The Iconic ‘90s Cone Bra Trend
By El Hunt
Here Are All 703 Outfits Rachel Wore On Friends
By Kat George
The Best Heels For Bunions, According To A Podiatrist
By Margeaux Baulch Klein and Maria Cassano
Get Even More From Bustle — Sign Up For The Newsletter