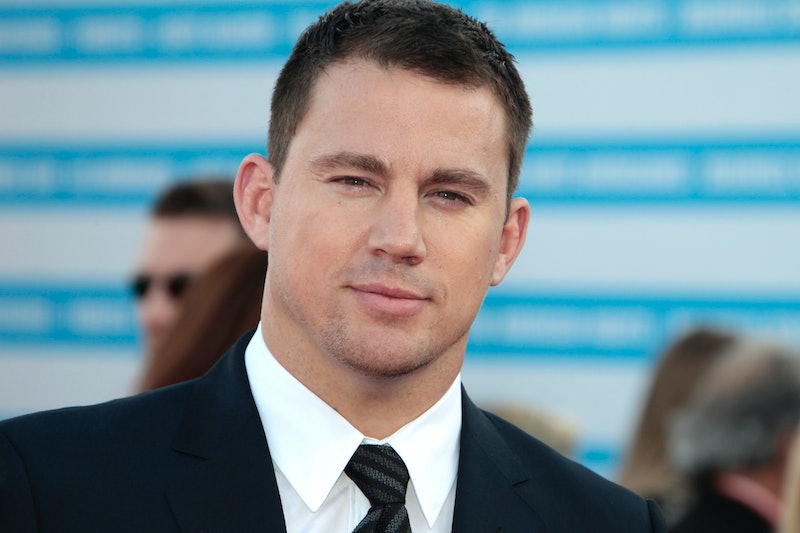 True story: I spend most days wondering what it's like to have Channing Tatum dance/strip in front of me, but, sadly, I've never been able to experience that dream in real life — unlike this very lucky group of people. That's right: According to EW, fans were recently treated to this very scenario IRL, after they gathered under the impression that they were going to see a special screening of Magic Mike XXL in 3-D. Tatum, undercover as a field marketer, began by asking the audience a few standard questions about the original movie, before taking them by surprise and joining a group of other male performers to dance and — get ready for it — strip. I mean, I guess it's kind of 3-D?

The delight doesn't stop there — not only was it sort of hilarious, the stunt was actually carried out for charity. Tatum is working alongside Omaze to help raise funds for the Runa Foundation, a charity that seeks to build the first medical research facilities for Amazonian plant medicine at Rios Nete, Peru, and Naku, Ecuador. According to Omaze's website, "Our mission is to study and preserve the ancient, indigenous knowledge of the rainforest as a living pharmacy, in turn creating potential new treatments for chronic illnesses, and sustainable futures for the incredible communities who call the Amazon home."

So how exactly does Amazonian medicine benefit from Channing Tatum's abs? Well, the whole prank was to promote the actual contest and prize: For their donations, Tatum is offering fans a chance to hang with him and the cast of Magic Mike XXL at the Hollywood premiere of the film. The package includes a day at the spa, a tux/gown fitting, walking the red carpet, and a huge after party...all with Tatum himself.

Bids for the big event start as low as $10 and can go as high as $25,000. Each donation comes with its own special reward — including underwear and bowties signed by Channing Tatum. He's just that kind of a guy.

The promo video for the fundraiser is hilarious, endearing, and full of many phenomenal moments. Here are the best ones:

When Channing Tatum Got a Really Big Kick Out Of Himself

The things he does for charity.

This Woman's Response To "Which Would You Say Was The Best Actor Out of All of Them?"

This Guy's Response To "Which Part Of The Movie Would You Like To See In 3-D?"

"Hopefully some full-frontal nudity for once."

This Question And Answer

"Would you say that you care about the story?"

When Strippers Appeared Amongst The Audience

Resulting in the greatest high-five of all time.

When Channing Tatum Watched The Strippers Like A Proud Papa

When Channing Tatum Dances In Disguise

If they only knew then what they know now.

When Fans Reacted Like This To The Big Reveal

Truly the greatest moments of their lives, and understandably so.