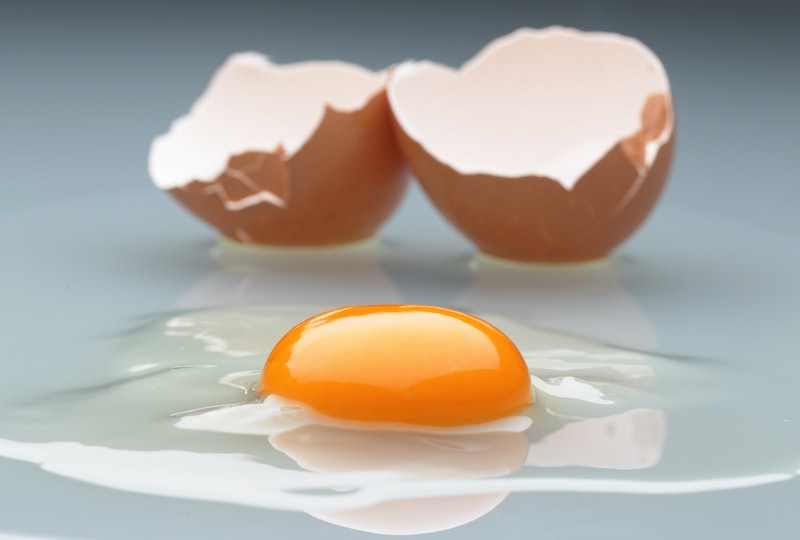 In case you didn't hear, "meme," "photobomb," and "clickbait" just made it into the Merriam-Webster Dictionary, to some people's dismay and others' amusement. But another lesser known word that made its way into that particular dictionary is "eggcorn," which, I would argue, is one of the more interesting additions. But what is an "eggcorn," exactly? It's hilarious, is what it is — but let's take a closer look.

Merriam-Webster's new definition for "eggcorn" is "a word or phrase that sounds like and is mistakenly used in a seemingly logical or plausible way for another word or phrase, either on its own or as part of a set expression." Dictionary.com, meanwhile, identifies it as "a word or phrase that is a seemingly logical alteration of another word or phrase that sounds similar and has been misheard or misinterpeted, as 'old wise tale' for 'old wives' tale.'" The term was coined by linguist Geoffrey Pullman in 2003 after an article by Mark Liberman where he wrote about the case of a woman who mistook "acorn" for "eggcorn." Pullman decided that these kinds of substitutions, which lacked a name, should simply be called "eggcorns," which makes understanding the etymology of the word pretty easy.

According to an eggcorn database, not all homophones are eggcorns; an eggcorn requires the new form of the original word to make sense, and in some instances, to make even more sense. Take, for example, a frequently misheard lyric from the Taylor Swift song "Blank Space": "Got a long list of ex lovers" often becomes, to the unaccustomed ear, "Got a long list, Starbucks lovers"; while this version of the line is inaccurate, it does still make sense, grammatically speaking.

Some other common eggcorns include:

As in, "I don't mean to single/signal you out."

As in, "I'll have cold/cole slaw with the hot soup."

3. "Holidays" instead of "Hollandaise"

As in, "She told me she made some holidays/hollandaise sauce!"

As in, "Women of her elk/ilk rarely take care of animals."

As in, "I found her curled up on the floor in the feeble/fetal position."

In all of these instances, both words make sense; for that reason, it's understandable why someone would switch one out for another. Check out a full list of eggcorns here; you can even contribute your own, bettering our collective vocabulary in the process.