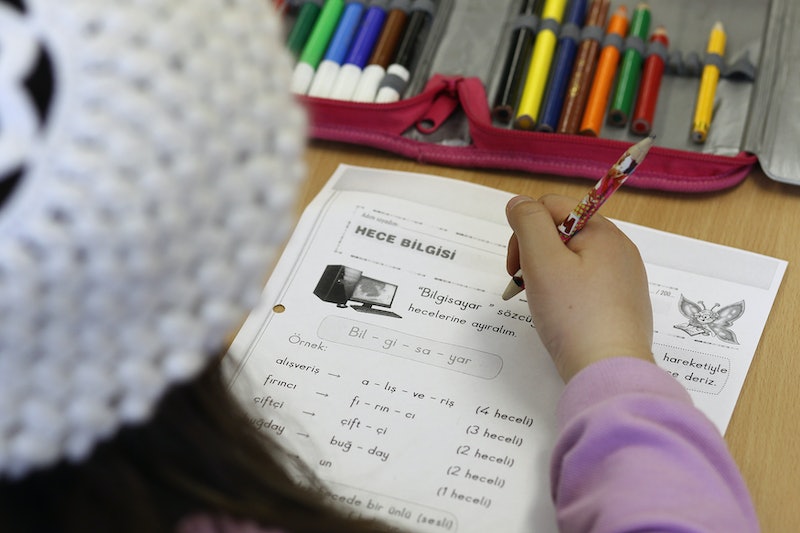 Research has consistently shown that being bilingual gives people advantages in, well, basically every area of life, and this week, we can add to that list. According to a recent study from the University of Chicago, bilingual children are more likely to be empathetic and better communicators, even if they aren't fluent in the second language. If you haven't already been kicking yourself for not paying attention during Spanish class in high school, I'll give you a minute to do so here.All joking aside, there's no use reproaching yourself for not learning another language as an adolescent. Studies have shown that the cognitive benefits of bilingualism generally apply only if the second (or third) language was taught during childhood. In fact, a study in 2014 found that the ideal time to start learning foreign languages is as young as three years old. As you age, your brain gets set in its ways, so to speak, which makes it more difficult to absorb other ways of speaking. For that reason, the University of Chicago focused on children in its experiment. Unlike other research studies, however, scientists didn't just use mono- and bilingual subjects; it included children who were "exposed" to a second language at home without speaking it fluently. In the study, adults asked child participants to move one of three toy cars, according to the Telegraph. The catch? The toy cars came in three different sizes, and the children could see that the smallest was hidden from the adults' point of view. When asked to move the "small" car, only half of the monolingual children moved the car the adult was referencing. On the other hand, 75 percent of the bilingual and "exposed" children understood which car the adult wanted to move. Researchers were left with two conclusions: either bilingual kids are telepathic, or exposure to another language gives children a better understanding of others' perspectives.

Unfortunately, X-Men-style mutations aren't real (that we know of), so they went with the former. "To understand a speaker's intention, one must take the speaker’s perspective," researchers wrote in Psychological Science, explaining that exposure to other languages could enhance children's ability to understand other points of view. Furthermore, the findings were unrelated to intelligence. Children in the exposure group performed just as well as bilingual children, even though they scored lower on cognitive performance tests, which led the study authors to believe that "communicative advantages demonstrated by the bilinguals may be social in origin."

So congratulations, bilingual readers! Not only can you order food in multiple countries, but you're just cooler people in general. If you're worrying that knowing just one language will turn your future children into unempathetic sociopaths, however, take a deep breath. Multilingualism is undoubtedly awesome, but there are plenty of other ways to make sure your kid doesn't turn out to be Dexter, I promise.