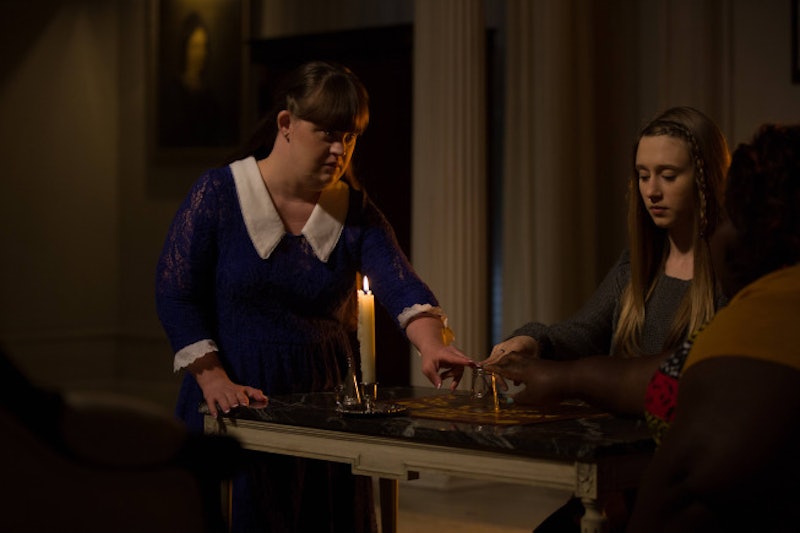 Sometimes it feels like Ryan Murphy shows are the Stefon of television series: they literally have everything. Just look at American Horror Story: Coven, who recently nabbed the queen of good witches everywhere, Fleetwood Mac singer Stevie Nicks, for a guest star role. And while his everything-and-the-kitchen-sink style of wall-throwing we call showrunning is not perfect all the time, in a series as wild and witchy as Coven, it somehow manages to work.

And, hoo boy, is Coven wild and witchy. So much so that it seems hard to imagine this show getting any witchier. Between the voodoo, Stevie Nicks, and Taissa Farmiga's killer vagina (Yeah, I'm still waiting to see how that storyline resolves itself, too), there's a LOT of crafty behavior going on.

But here's how it could get even witchier, if it tried:

Give Me a Seance!Witches can talk to the dead and bring spirits back to life, right? Why not use it here and create a real battle royale between Fiona Goode and the (spoiler alert) former Supreme she murdered. After all, any reason to have more Christine Ebersole in something is good enough for me.

Somebody Call Fairuza BalkThe only way this show could really get any witchier is if the head Bitch Witch of 1996's cult classic The Craft was involved. The power of Manon compels you!

Where Are the Cats?Seriously — cats are all up in witches' business, so why aren't they in New Orleans?

Somebody Should Turn Into a CatI mean, that's a thing that happens — just look at Professor McGonagall from Harry Potter.

More DancingIf Sandra Bullock, Nicole Kidman, Stockard Channing, and Dianne Wiest did it in 1998's Practical Magic, then Jessica Lange, Kathy Bates, Angela Bassett, and Sarah Paulson should do the same. Witches love to bust a move — really gets the powers flowing.

Flying BedsIf Miss Price could do it in Bedknobs and Broomsticks, then certainly it's high time to see something like, oh I don't know, maybe Zoe and her frankenboy Kyle speeding away on a magical bed towards some sort of salvation, in turn re-calibrating her killer vagina to bring him life instead of assured death. Although after that whole thing with his mother (oh my god the worst), I can't imagine he'd have much use for the boudoir anymore.

And If All Else Fails...Thackery Binx could always rush in and save the day. The end!