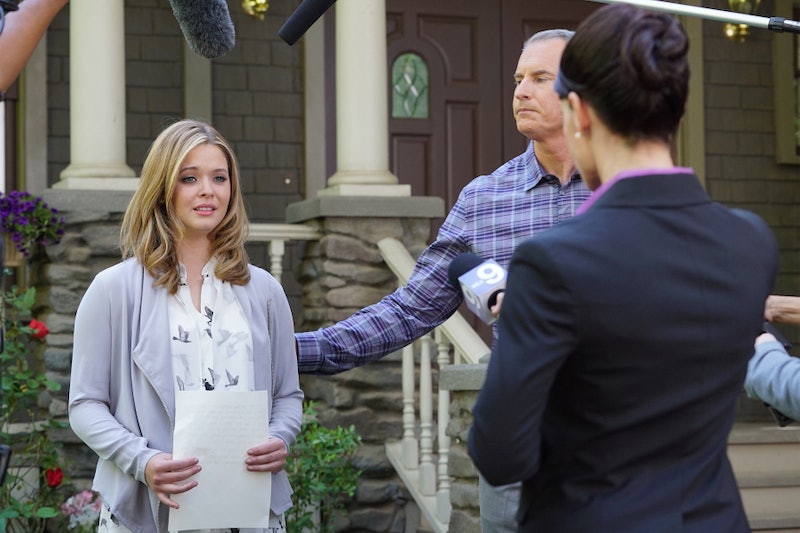 As usual, Ali's putting herself back in the line of fire on Pretty Little Liars Season 6 premiere. Shortly into Tuesday night's "Game On, Charles," Ali escaped the police, Jason, and her father and went on the run with an unlikely team — Ezra and Caleb. Which, to any average person, would seem like a terrible idea, considering Pretty Little Liars ' Andrew is a suspected kidnapper at large that probably wants to take Ali to his dollhouse, too. If that's really his deal, of course. But the bigger question here is where is Ali going on Pretty Little Liars and does this mean that Charles has threatened the Liars' lives unless the real Alison DiLaurentis stands up and takes her rightful place?

It seems like Ali is taking Charles' bait in hopes that it'll lead to some type of escape from the dollhouse for her friends. The last we saw her in the Season 6 premiere, she had ditched Caleb and Ezra and got into a car that seemed to be waiting for her and playing the same creepy music Charles loves. But, don't worry, PLL fans, because she's clearly not operating alone — Caleb and Ezra still have tabs on Ali and, Caleb promised Hanna's mom that he'd find the girls. If we know one thing to be true — aside from the fact that Charles is truly a psychopath — Caleb ALWAYS follows through on his word. Especially when Hanna is involved.

It couldn't be more obvious where Ali is headed, especially now that she's wearing that damned yellow tank top again. Charles instructed Ali to put on the clothes and start walking or "they" would all die. But, luckily for Ali, the Liars put Charles in a difficult enough situation where, for once, Ali wasn't his most important target. Once Spencer started burning all of Charles' sentimental items, he was forced to choose between locking up Alison in the dollhouse and watching his world burn. And, naturally, he chose his life's possessions — leaving Ali in the perfect place to meet the Liars as soon as they escaped the dollhouse. Could anyone be luckier than Ali right now?

More like this
Ava DuVernay Thought The 'Queen Sugar' Series Finale Felt “Really Satisfying”
By Brad Witter
'Tell Me Lies' Season 2 Is On The Way & The Cast Already Has Ideas For What's Next
By Gretchen Smail and Grace Wehniainen
Elizabeth Debicki On Her Approach To The Most Debated Scene From 'The Crown'
By Grace Wehniainen
The First Trailer For 'That '90s Show' Includes So Many Nods To The Original Series
By Jack Irvin, Alyssa Lapid and Grace Wehniainen
Get Even More From Bustle — Sign Up For The Newsletter