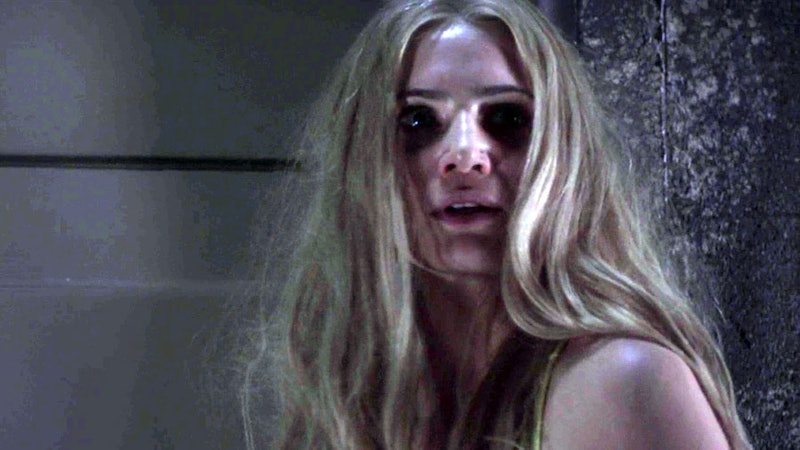 Remember to breath, everyone. Within the first TWO MINUTES of the Pretty Little Liars Season 6 premiere, we learned one shocking thing: Charles has someone else in his dollhouse. It took the entire episode for her identity to be confirmed and she turned out to be long-lost Sara Harvey. After processing this big reveal I came up with a crazy theory that might not actually be so crazy. I'm willing to wager some hard-earned case that Sara Harvey is the mysterious "blonde girl" from Radley, the same one who was with Marion Cavanaugh when she died.

The more I think about it, the more this makes sense. The big question surrounding Sara isn't why she was locked up in the Dollhouse, but rather how she ever came across Charles in the first place. I like to think that this Big A, Charles, isn't roaming the streets of Rosewood, looking for girls to kidnap and hold hostage in a terrifying man-made dollhouse. I believe think he has reasons for his disturbing actions— as twisted as those reasons may be – so having Sara there may not actually be as strange as we think. Maybe Sara is there because at one point, she knew Charles.

I'm a firm believer in the theory that Charles was once locked up in Radley. There have been plenty of signs pointing to this and it's completely plausible. While we don't know why Charles would have been locked up, it's not so far-fetched to believe that he made some friends while he was there. I believe one of these friends was Sara.

Sara — as described by her friends who met with Emily in Season 4 — was a Queen Bee, just like Ali. She was a "mean girl." She was the alpha. She was in charge, and Sara could make your life wonderful, or she could make your life a living hell. In every way, she was another Ali. Can you imagine Charles coming face to face with a version of Ali while he's locked up in Radley?

Here's the next part of my theory that falls perfectly into line: there's been talk of a "blonde girl" with a "bad air" in Radley. Yes, at first I thought it was Ali, since this blonde girl fits Ali's description. Then I thought it was Bethany Young. Now I think it was Sara, and she's the girl who was with Toby's mom when she died. It would explain how she and Charles first met, and if she reminded him of Ali, why he kidnapped her.

All of these secrets are connected, and now Sara's the key to unlocking a lot of them. She's been trapped in the dollhouse the longest, and now that she's out, it's time to find out what she knows. She's had contact with Charles, and I believe she's known him a lot longer than we have. Sara Harvey may just become the most important character on Pretty Little Liars this season.

More like this
The 'PLL: Original Sin' Creators Say A’s Identity Will Be “Very Clear” By The Season Finale
By Alyssa Lapid
Every Horror Movie Reference In The 'PLL: Original Sin' Premiere
By Alyssa Lapid
Louise & Mercedes’ Relationship Is “A Little On And Off” After 'FBoy Island'
By Kadin Burnett
Everything To Know About Netflix’s 'Never Have I Ever' Season 4
By Jack Irvin and Gabrielle Bondi
Get Even More From Bustle — Sign Up For The Newsletter