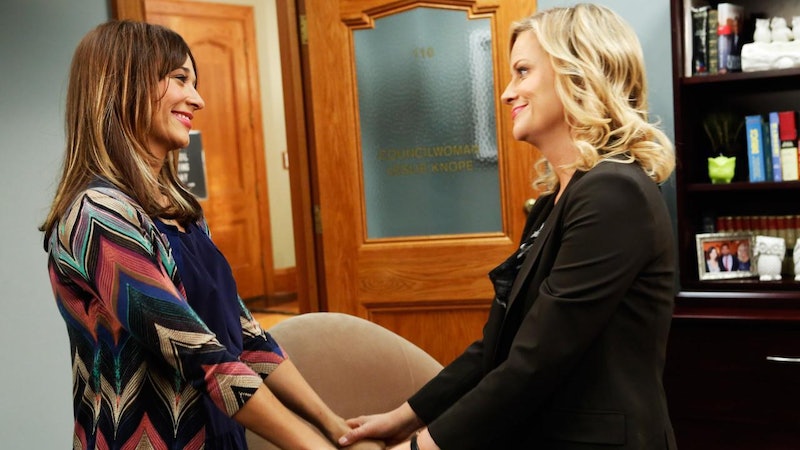 Imagine a world where there is peanut butter, but no jelly. A world where there are puppies, but no Instagram to show them off on. A world where there are feelings, but no Taylor Swift song to accompany them. I know, I know. I took you to a dark place, but I had my reasons. I use these crucial pairings to illustrate a point: Not having a work BFF is like only being half of a whole. I don't know if I've ever truly been in love, but I do know for a fact that I have found soulmates in work best friends that will probably never compare to the "real" thing. Step aside, The Notebook. When I write, direct, and star in Work BFF Book, Ryan Gosling's scruff will be old news.

It doesn't matter who you are, where you're from (♫ what you did ♫...OK, sorry, back on track), because even if you and your Work BFF could not be more different, you still understand each other on a primal level that the rest of the non co-worker plebes ever can. At some point in your work BFF-ship, words no longer matter. You can communicate solely through eye contact and strategically-picked emojis. Regardless of how you and your work BFF vibe each other during the day, though, one fact remains indisputable: There are some things in this universe you can only say to your work BFF. Here are a few of the key ones:

"My [insert friend/family member/sexy times partner from the real world] is being such a jackass."

Work best friends: Listening to us bitch about the rest of the people in our lives since pretty much the dawn of time. It's like an all access pass to whining about other people, because it's not like your work BFF is going to go all #TeamOtherGuy on you like people in your friend circle might. Your work BFF will always hate on whomever you are hating on in your life right with you, no questions asked.

"Is there blood on my butt?"

In my mind's eye, my uterus is some 8-year-old pranking punk ass little brother that wants to catch me off guard at all times. And when you're taken by surprise at work, there's really no discreet way to check your butt for period blood without looking like a dog chasing its own tail. Enter your work BFF, AKA your menstrual hero.

Nobody else could be trusted to receive this distress call via text. They're like the Sam to your period-stricken Frodo.

You don't say this out loud, obvi. You say it with your eyeballs, and perhaps a very covert half-smirk, and then boom. Hello, studly delivery guy/person who got off on the wrong floor/person we hired to mortally humiliate our boss by singing on their birthday. 'Sup.

No judgment. Only sympathy. Commence the breakdown of what riveting party story and/or hell scape went down the night before.

"Oh my god, I totally forgot to put on deodorant today."

I don't know why as humans we feel it necessary to vocalize this in the rare instances it happens. I'll consult some science about it, maybe. But the fact of the matter is, you're going to awkwardly confess it to someone no matter what happens, and your work BFF loves you no matter how rank you are.

You're kidding (mostly), but on the days when you seriously want to kick the printer into the next dimension and the entire office feels like a pool of suck, it feels good to say it out loud to someone who A). Totally has been there, and B). Isn't about to call HR on your ass.

You're also allowed to spontaneously fire each other on the reg. Offenses include: Making terrible puns, calling sick out of work and leaving your work BFF lonely, and sneaking Taylor Swift lyrics into headlines (SORRY NOT SORRY about that last one, America).

"What should I get for lunch?"

It's not even that you're asking this relatively innocuous question. It's that you expect them to spend the next 5-10 minutes of their lives considering the answer to this question as seriously as they would consider a marriage proposal, because let's be real, guys, lunch is the best part of any weekday. I don't need someone's weak sauce, "Oh, there's a Panera down the street" crap. I need someone who isn't afraid to open their Seamless app and get their hands dirty. My lunch depends on it.

"I'm gonna get ~slizzard~ this weekend."

"I have no earthly idea what just happened in that meeting."

As hard as you try to adult, sometimes you just have no idea what is going on. You got distracted by a Kardashian breaking the internet, or you slept for two hours the night before, or everything people are saying just goes right over your head and far beyond your brain space. Your work BFF is not here to judge. They've got your back and will email you notes faster than you can shed one tiny tear for your lost attention span.

"Can you tell there's a hickey on my neck?"

Nope, but you can tell there's a story here and obviously no work is going to get done until it is discussed in disgustingly accurate detail.

"If you ever leave this place I'd probably set myself on fire and jump off a cliff."

In any other relationship, this would be a huge red flag, collect $200 and don't pass go type of situation, but this kind of unhealthy reliance on each other is what defines work BFF-ship. Co-dependence has never tasted so sweet.