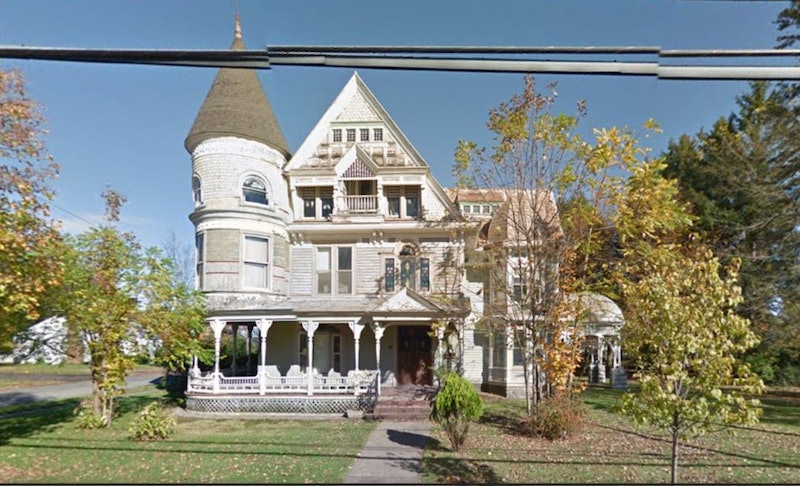 Want to buy a haunted house? Because you can — potentially, at least: The W.H. Dorrance House, a Queen Anne-style house in Camden, New York, has just been listed for $105,000, and it's allegedly so haunted that the house's ghosts showed up on Google Street View. For reals. Well, maybe not the “haunted” part — but looking at the house via Google Street View reveals something rather odd in the windows, and, well… you all know how much I love a good ghost story, so of course I had to do a little digging about it.

The W.H. Dorrence House was built by its namesake, clergyman and later hardware business owner William H. Dorrance, sometime in the late 1800s or the early 1900s (there seems to be some debate about which). An example of the Queen Anne architectural style that was popular during the 19th century, it features stained glass, hardwood floors, and even a conical tower. It was added to the National Register of Historic Places in 1999 — but according to MessyNessy Chic, it hasn't had an easy time of it: Its most recent owners purchased it for $234,000, but “mysteriously left almost as soon as they bought it”; it subsequently went on the market in 2010, only to fall into foreclosure after failing to sell for $169,000.

HOLY SHIT YOU GUYS THOSE ARE HANDPRINTS.

The handprints, which are from images dated October 2013, were spotted earlier this week by a reader of "online museum of the bizarre" Cult of Weird, and they've spread far and wide in the days since. Of course, there are plenty of perfectly logical explanations for exactly how those mysterious handprints got onto those windows: Maybe they're the result of a finger paint-loving child dipping its hands where they don't belong — or maybe they're not even there in real life, being instead the results of some sneaky jokester exploiting Street View. But the Internet, not being the most logical of places, has latched onto the idea of the handprints being the mark of a ghostly presence — and to be honest, I can't really say I blame them. For anyone who loves a spooky story (like myself), weirdo occurrences like strange handprints lend themselves so well to a potential haunting, regardless as to whether you believe in ghosts or not. As far as I can tell, the W.H. Dorrance House doesn't have any tragic sort of history attached to it; it's just an old house, and old houses attract ghost stories like One Direction attracts preteen girls.

In all likelihood, the W.H. Dorrance House isn't haunted. This whole “haunted house” schtick is, however, kind of hilarious, so if you, too, love this stuff, head on over to Google Street View to see it for yourself. You can also check out the house's listing, just in case you're in the market for a Queen Anne Revival mansion. You never know, right?

More like this
You Probably Didn't Realize These Expensive Mistakes Around The House Are Actually Easy To Avoid
By Mackenzie Edwards
15 Genius Storage Solutions For Your Next Bathroom Refresh
By Emma Garza
10 Breathable Bedsheets To Keep You Cool During The Heatwave
By Orla Pentelow and Sophie McEvoy
The 7 Best Vacuums For Sand In Your Home, Car & Beyond
By Megan Gray
Get Even More From Bustle — Sign Up For The Newsletter