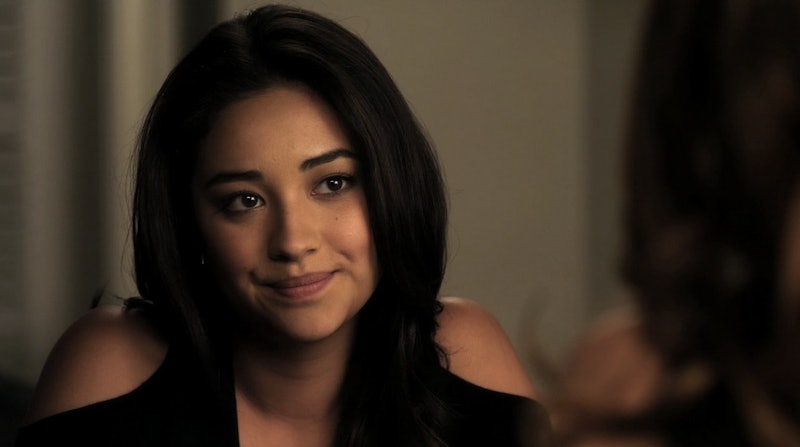 There's no such thing as an unlikely romance on Pretty Little Liars— I mean, this is the same show that had Ashley Marin and Jason DiLaurentis hook up in Season 5. But after the Pretty Little Liars Season 6 premiere, it seems like there might be a very expected 'ship about to sail. Before the "Game On, Charles" premiere, series exec Oliver Goldstick teased a new PLL romance for Emily, claiming that the dollhouse might make her realize that her "soul mate" has been closer to her than she thought. The odds of I Marlene King breaking up one of the series' main 'ships isn't out of the question, but here's a theory you might not have thought of — what if Pretty Little Liars ' Sara Harvey is Emily's soul mate?

We don't know much about Sara Harvey and her life before she ended up in Charles' dollhouse, aside from the fact that she was kind of the Ali of her friend group. Which means that possibilities of developing her character in Season 6 are pretty much endless for the PLL writers room. Goldstick told Entertainment Tonight that Emily "might just realize that she's now got a soul mate closer to her than she ever thought," and adds that the experience of being in the dollhouse is going to play a huge role in her romantic interests in Season 6.

So, proximity-wise, Sara was closer to Emily than ever before during those three weeks the Liars spent in the dollhouse. I mean, Charles was keeping Sara essentially on the other side of the wall from the girls the entire time. Goldstick's spoiler also pretty much rules out the possibility of a Paily or Emison reunion, considering those two couldn't have been farther away from Emily for most of Season 5B. Does it seem a little crazy to you that Emily's soul mate could be someone we don't even know? It shouldn't — it wouldn't necessarily be surprising that Emily would bond with Sara over the traumatic experience they've been through in the time following their escape — even though no one would argue that Sara's probably been through slightly more hell than the other girls.

Not just anyone is going to be able to pair off with these girls after the dollhouse. I mean, spoilers have revealed that even everyone's favorite #relationshipgoals couple, Haleb, is going to have trouble in Season 6. (They'll still continue to be perfect, though, don't worry.) It really seems like Goldstick's hints at Emily's romantic future in Season 6 point directly toward her new 'ship being with someone that was in the dollhouse with the Liars. Again, it's entirely possible that I Marlene King would break up a 'ship and put one of the Liars with Emily — though I could see that being problematic, considering the girls are so close, that they would never have come forward to support Emily. But, aside from Mona — who was recently dating Mike and, frankly, Emily deserves someone who WON'T manipulate her for once — Sara is the only other person that's been close to Emily that could possibly be her soul mate. And, honestly, I'm already really into Sara getting some screen time in Season 6. It's only fair after how many years she spent in Charles' dollhouse.

More like this
The 'PLL: Original Sin' Creators Say A’s Identity Will Be “Very Clear” By The Season Finale
By Alyssa Lapid
Every Horror Movie Reference In The 'PLL: Original Sin' Premiere
By Alyssa Lapid
15 Photos Of The 'House Of The Dragon' Cast At The Show's UK Premiere
By Radhika Menon
Megan Thee Stallion Actually Auditioned To Be This 'P-Valley' Main Character
By Radhika Menon
Get Even More From Bustle — Sign Up For The Newsletter