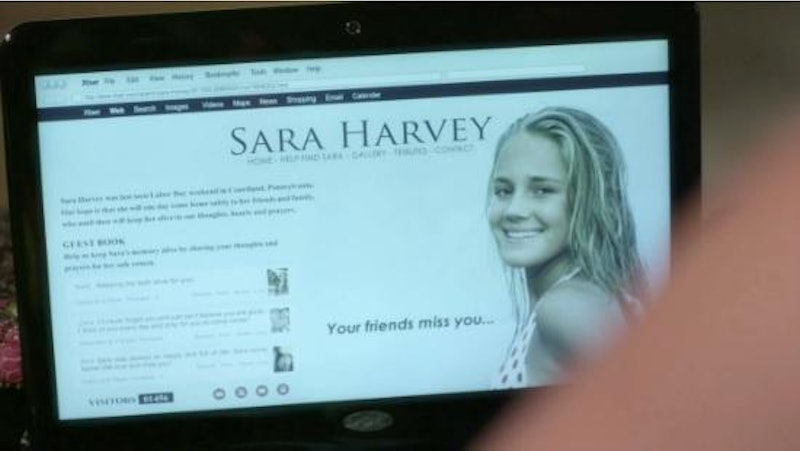 Have you recovered from that explosive Pretty Little Liars Season 6 premiere yet? Just when you thought things had calmed down thanks to a secret rescue mission from Alison, Ezra, and Caleb, we were hit with a huge shock. The Liars were happily reuniting with their loved ones when the police called out news from the dollhouse that viewers were already well aware of: there was another girl in the dollhouse. A police officer coaxed the blonde out of her cell, and asked her who she was. The answer should ring familiar to all PLL fans, as Sara Harvey was Charles' first prisoner, and apparently his first Alison "doll."

If you gasped when that name came out of her mouth, you were definitely not alone. Sara was only briefly mentioned in Season 4 as a girl who went missing the same weekend as Ali, leading the Liars to believe her body was buried in Alison's grave. When that turned out to be Bethany Young, Sara basically faded from their minds. But she didn't fade from fans' minds, as many theories about her have popped up ever since we realized this Alison lookalike must still be missing.

In all likelihood, Sara has been in the dollhouse for over two years, so I can't even imagine how much trauma she has been through. Charles had her dressed up as his fake Ali, and she's been marking the time with tallied on the wall. What was happening in the dollhouse before Mona came? What happened to Sara once Mona replaced her as Ali?

Of course there's one question that matters more than all others: Does Sara know who Charles really is? Maybe he wasn't so careful to hide his identity at first, or maybe at some point in those years of captivity she managed to see his face. No matter what exactly she knows, she's much more familiar with Charles than the Liars, and hopefully they'll all be able to team in Season 6 to take down Big A once and for all.

More like this
Mike Flanagan Teases 'The Midnight Club' In This Exclusive, Creepy Clip
By Grace Wehniainen
Glenda Cleveland Died 2 Decades After Trying To Turn In Neighbor Jeffery Dahmer
By Brad Witter
'Reservation Dogs' Season 3 May Finally Mend Bear & Willie Jack’s Relationship
By Gretchen Smail
'Grey's Anatomy's New Intern Got Advice From Dr. Bailey Herself
By Grace Wehniainen
Get Even More From Bustle — Sign Up For The Newsletter