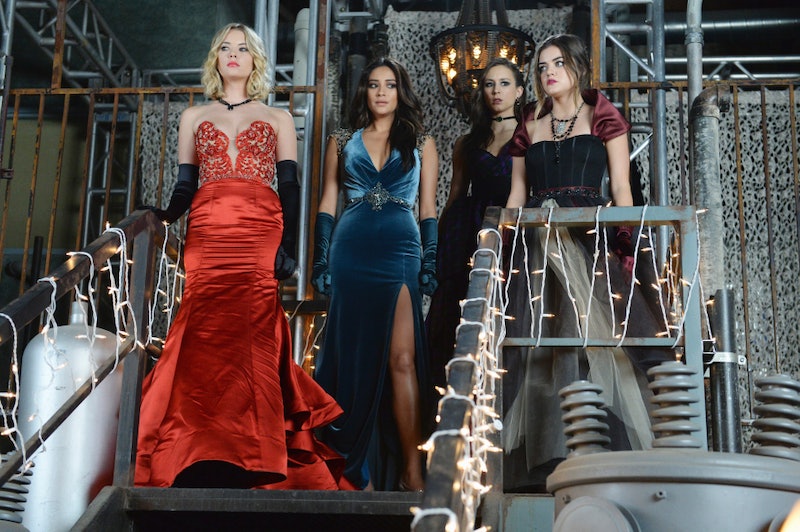 Buckle your seat belts, Pretty Little Liars fans: the much-heralded premiere of Season 6 is almost here. Yep, you heard that right — no more tearing your hair out analyzing the trailer, no more building intricately woven theories, no more scrolling through endless pages of message boards for Pretty Little Liars Season 6 premiere clues, because it's the #SummerofAnswers, baby. We can finally sit back and relax (as much as you can relax while watching a show with as many jump scares as PLL, anyway), so let's celebrate by going through every single thing we know about this season so far.

Of course, we all know that this #SummerofAnswers is going to create as many mysteries as it solves (come on, this is Rosewood we're talking here), but it'll still be great to see our favorite well-dressed clique on the air again. Even though cast and crew members have been characteristically tight-lipped about spoilers (especially where all things Charles DiLaurentis are concerned), they've managed to spill their fair share of juicy tidbits over the course of this never-ending summer hiatus. So before "Game On, Charles" comes along to totally mess with our heads, let's review the facts.

1. It Starts In The Dollhouse

In an interview with E! Online, showrunner I. Marlene King said, "We will start next season right were we left off, with the girls trapped and they don't get out immediately." Hooray! We get to see more of Charles' super-creepy creation.

2. The First 2 Minutes Will Be Huge

3. Yes, Charles Is Related To The DiLaurentis Family

Sasha Pieterse revealed that Charles "is somehow related to the DiLaurentis family," and explained how that very fact was "a huge spoiler." Now, that still leaves a lot of doors open — is he her brother? Jason's twin? Disguised as Jason, or vice versa? Long-lost brother? DiLaurentis foster child? Linked to Cece Drake or Bethany Young? He could still be pretty much anyone.

Come on, Sasha — couldn't you have given us a slightly more spoiler-y spoiler?

4. Andrew Is Not To Be Trusted

Pieterse also said fans "should be suspicious" of Andrew — apparently, he's "a weird component in all of this," and "he’s definitely up to something." Jury's still out on whether or not he's Charles in disguise (or vice versa), but dude's last name matches the name of the farm where the Rosewood PD discovered A's lair, so there's bound to be some exciting Andrew drama coming our way in Season 6.

5. We Already Know The Episode Titles

The first 10 episode titles of PLL Season 6 have been revealed, and there's a lot of information to be gleaned from them, from the fact that there's probably going to be Jenna drama ("Don't Underestimate A Blind Bitch"), to possibility of the Liars actually vanquishing Charles ("Game Over, Charles"). Oh, and there's going to be a visit to Radley Sanitarium ("Back to Radley"), which is always a welcome conceit.

6. This Will Be The Most Intense Season Yet

According to Pieterse, "It's really dark...the girls go through very adult things, and this is definitely the darkest season that we've encountered." Should we be excited or scared?

One of the most popular (and persistent) fan theories is that Aria's actually A (hey, Mona did call her "Big A" that one time), and Lucy Hale fanned the flames when she told Bustle, "I think that there’s a lot more to her that will be exposed in the coming seasons."

Social media basically exploded when actress Dre Davis Instagrammed a photo of herself wearing a dirty yellow tank top and a bedraggled blonde wig. The picture was taken down almost immediately — but not soon enough to stop all of the rumors that Bethany Young would finally (finally!) be coming to Rosewood.

Things looked rocky for Aria and Ezra where we last left off, but in an interview with Entertainment Tonight, executive producer Oliver Goldstick reassured fans that they were far from over. "Part of [Aria] knows that she and Ezra need to go their separate ways, but something happens in the beginning of [season] six A that brings them very close together again." Oh, and there's also the little fact that King recently dubbed them "soulmates" to Entertainment Tonight as well.

Goldstick also noted that the pending Dollhouse trauma might cause some problems for Hanna and Caleb — but luckily, he also noted that the two of them "have something that is pretty damn special," and "I think [Caleb] remains the perfect boyfriend in so many ways." Can't all the 'ships just have happy endings?

Speaking of 'ship drama, the whole Officer Toby thing might still continue to get between him and Spencer, but don't lose hope. Goldstick told Entertainment Tonight, "I would just say that her romance may get a little addled by the mystery of it all, but that doesn’t mean her romance goes away completely."

Goldstick was pretty judicious with all of the PLL relationship gossip, but he was most vague with Emily. He said, "She might just realize that she's now got a soul mate closer to her than she ever thought." Fingers crossed for Paige — if she doesn't turn out to be on the A Team, that is.

Perhaps one of the juiciest tidbits about the upcoming season is the fact we'll be skipping the girls' college years — after Episode 10, the show will flash forward. We don't know quite why yet, but astute fans (and Bustle writers) think the jump could be catalyzed by yet another missing girl. That would be a nice way to bring things full circle, no?

14. There Could Be A Haleb Wedding

In another interview with ET Online, Goldstick hinted that one of the Liars might get married after the time jump, which has me wishing for a Hanna and Caleb wedding. That's kind of all I've ever wanted from the show (besides A's true identity, of course). TEAM HALEB FOREVER.

15. Mini-Sia Will Be Making An Appearance

Judging from cast and crew Instagrams, it looks like Dance Moms star Maddie Ziegler will be playing a Radley patient — could she be a young Bethany Young?

All in all, it sounds like we're shaping up towards a pretty darn promising season, no? Thank goodness Pretty Little Liars is finally back. For more on Season 6, check out Bustle's PLL podcast.

More like this
The 'PLL: Original Sin' Creators Say A’s Identity Will Be “Very Clear” By The Season Finale
By Alyssa Lapid
Every Horror Movie Reference In The 'PLL: Original Sin' Premiere
By Alyssa Lapid
15 Photos Of The 'House Of The Dragon' Cast At The Show's UK Premiere
By Radhika Menon
Megan Thee Stallion Actually Auditioned To Be This 'P-Valley' Main Character
By Radhika Menon
Get Even More From Bustle — Sign Up For The Newsletter