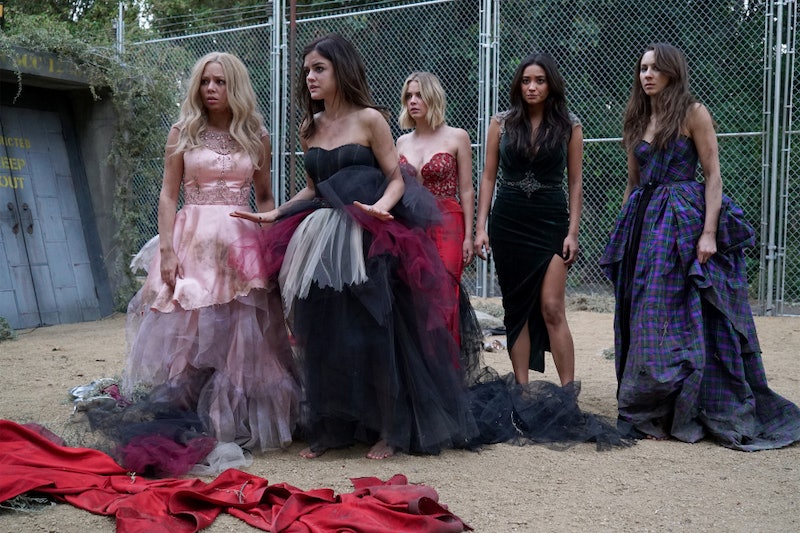 I recently discovered that when you google, " Pretty Little Liars answered questions," Google asks if you meant "unanswered questions," and that's basically all you need to know about this show. It will always leave you more confused than you were before watching. Even the Pretty Little Liars Season 6 premiere left us with more questions, despite the tagline for this season promising a #SummerOfAnswers. So far, it is actually more like the #SummerOfInsanity and the #SummerOfAMillionMoreQuestionsSorryNotSorry.

I love I. Marlene King, but she needs to throw us a bone, man. After years of waiting to find out who Big A was, we were left even more confused in the Season 5 finale when we learned that A is a mysterious person named Charles. Now, after the first episode of the new season, I'm not just wondering who is Charles? I'm also wondering where is Charles? And why does Charles hate Ali so much? And what did Charles to do the girls in that room? And how does Charles afford a million ugly yellow tank tops?

But the show needs to explain a lot more than just everything about Charles DiLaurentis. After the first hour of the new Pretty Little Liars season, we were also left asking these 97 questions, and would like the answers ASAP, please. 'K thanks bye.

1. How long has Charles been planning this?

2. How long was Sara Harvey in the dollhouse?

3. How did Charles find Sara?

4. Who was the original Sara in the website photo?

5. Did Charles attack Ali that night to bring her to the dollhouse?

6. Where does Bethany come into play?

8. Why is Charles so obsessed with Ali?

9. Is it all because of the yellow tank top?

10. How does Charles feel about Ali’s new haircut?

12. Seriously, how does he have so many?

13. Does Sara have an older sibling in the NAT club?

16. Why are the cops so obsessed with Andrew?

17. Why is Andrew’s handwriting so nice in his journal?

18. Did Charles plant the journal to frame Andrew?

19. Why is Charles' handwriting so nice?

20. Why is the Rosewood PD so bad at their jobs?

21. Did Toby kinda enjoy scaring the crap out of Jason?

22. Why were both Jason and Toby wearing shirts?

24. Can the real Olivia Benson take over the Rosewood PD?

25. Exactly how much money will the Hastings sue Charles for?

26. Did Charles actually send the Liars' morgue picture to their parents?

27. Were there funerals for the Liars in Rosewood??

28. What the hell was happening in those bedrooms?

29. Why did Charles give Hanna and Emily the WORST outfits in the dollhouse?

31. What has Charles been feeding them?

32. Has Charles been to a grocery store?

33. Does he use FreshDirect?

34. How many rooms are actually in the dollhouse?

35. Where does Charles live?

36. Does he live in the dollhouse?

37. Does he live near the surveillance room?

39. Is Charles’ bedroom decor on fleek?

40. Why did Charles put pink streaks in Aria’s hair?

41. Why did Charles cut off so much of Aria’s hair?

42. Is Charles a beauty school dropout?

43. How many masks does Charles own?

44. Does Charles make his own masks?

45. Which does he own more of, black hoodies, leather gloves, or masks?

47. Do Emily and Aria’s parents even know they’re missing?

49. Is Charles coming out with a line of personalized greeting cards?

50. Can you set your GPS to have Charles’ voice?

51. Who is the woman on the dollhouse speaker system?

53. Does she just happen to have the same taste in music as Charles?

54. Would she enjoy “Unwritten” by Natasha Bedingfield if she were alive today?

55. How did Charles end up with such an eclectic taste in music?

56. What does Mr. DiLaurentis know about Charles?

58. If he knew about Charles the whole time, how did he allow this to go on?

64. Where did Charles get all of his baby stuff?

66. Did Mrs. DiLaurentis know about the dollhouse this whole time?

67. Why did the Liars burn the home movie without watching the whole thing???

68. Who filmed the home movie?

69. If Charles had a fire alarm that whole time, why didn’t he pull it before they burned the whole room down?

70. Does Charles’ fire alarm connect to an actual firehouse?

71. Shouldn’t the Liars have just pulled that fire alarm on day one?

72. What was the purpose of his glass spy-wall if he didn't intend the girls to get to that room?

74. Can he even control their rebellion?

75. How’s Paige doing out in California?

78. Will Sydney ever matter?

82. When is Maddie Zeigler coming?

85. Is Charles afraid of Caleb punching him?

86. Is there something in the water in Rosewood?

87. Like, how many people are psychos running around that town?

88. Was that Ezra’s first and last time being useful?

89. Why are Hanna and Caleb so perfect?

90. Do state parks not have zoning laws in Pennsylvania?

91. How did Charles get a permit to build a bunker there?

92. HOW MUCH MONEY DOES CHARLES HAVE?

93. Does Charles own the state park?

94. Where did the giant electrified fence go?

95. How many exits does the dollhouse have?

96. Did Caleb find another backdoor?

For more questions and answers, check out Bustle's PLL podcast below.

More like this
The 'PLL: Original Sin' Creators Say A’s Identity Will Be “Very Clear” By The Season Finale
By Alyssa Lapid
Every Horror Movie Reference In The 'PLL: Original Sin' Premiere
By Alyssa Lapid
This New TV Show Revisits The Most Controversial True Story From Hurricane Katrina
By Brad Witter
Everything To Know About Netflix’s 'Never Have I Ever' Season 4
By Jack Irvin and Gabrielle Bondi
Get Even More From Bustle — Sign Up For The Newsletter