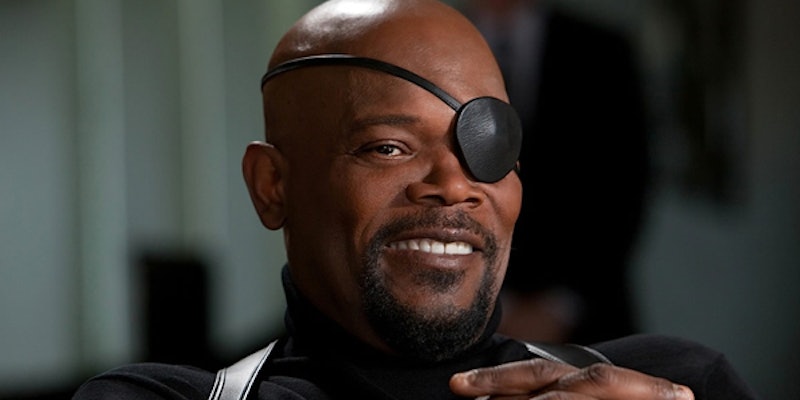 Though Captain America: Civil War is set to include nearly every major and minor character in the Marvel movieverse, somehow, Nick Fury did not make the cut. And yes — Samuel L. Jackson is just as confused by this news as everyone else. According to Collider, the actor who brings the mysterious S.H.I.E.L.D. director to life was apparently expecting to join Civil War, but with only two movies left on his contract, Marvel reportedly decided to save Jackson for other Marvel outings (the two-part Infinity War, perhaps?) — though Jackson told Collider he wants to re-up his contract, saying, "But I’m not in Captain America 3. I can’t figure that out, but I’m not... of course [I’m interested in returning]! I’m looking for a contract extension right now, yeah. I’m looking to re-up." So, what gives, Marvel? Nick Fury is arguably the most essential part of The Avengers franchise — how can be not be in Civil War?!

In order for the Civil War to have maximum impact, Fury needs to be around. This is an epic battle pitting Captain America against his friends and the government as they try to regulate how and when superheroes save lives. It's kind of a big deal for the Marvel universe, so it's even bigger that the only major players being benched besides Fury are The Hulk (who should avoid high stress situations when possible) and Thor (he has a whole other world to worry about). Even Ant-Man is going to be in this movie — and yet, no Fury. Here are all the reasons why this is a terrible idea:

The Avengers are Fury's team! Civil War is going to see the team ripped apart as they align themselves with either Captain America or Iron Man. Creating The Avengers was quite possibly the greatest thing Fury accomplished in his storied career. Even if Marvel did not want to use up one of Jackson's last appearance, a cameo would have sufficed so fans could at the very least see how Fury reacted to having his life's work torn apart.

2. He Is In Charge of The Avengers' New Base

Spoiler alert: at the end of Avengers: Age of Ultron, Fury was in charge of the new Avengers base. Basically, he had stepped back into his natural leadership position. Explaining how Fury goes from being hands on to mysteriously absent is not going to be easy.

Fury is the blunt, voice of reason in a world populated by hotheaded superheroes. He is basically the dad who will turn this car around if the kids don't stop jabbing each other in the eye. While this might explain why Marvel wanted Jackson to sit this one out, it could actually damage Civil War in the long run. Think about how high the emotional stakes would become if even Fury couldn't get through to Iron Man and Cap.

4. And His Conversations With Cap and Iron Man Would Have Been Epic

The Avengers is the house that Fury built — and now, Cap and Iron Man are going to pull that house down. The conversations between Fury and these two stubborn men would have been epic. The team and the work they do means everything to Fury, and to see a government intervention pull it apart would crush him. Not being able to get through to Cap and Iron Man would have crushed him even more.

5. What Side Would He Have Been On?

Would Fury have chosen a side in the Civil War? I have a hard time imagining him being down with the government micromanaging heroes, but he is also an agent from way back. He should have a voice in this story and the fact that he doesn't is depressing.

6. Fury Is Not The Kind Of Man To Lay Low During A Time Of Crisis

Fury wasn't in the Civil War comic because he was busy fighting a secret, underground war. However, the Fury of the movieverse has always been very present. With his entire team in a state of crisis, I don't see him sitting this one out. The Civil War would be personal to Fury, and he has been such a key part of both Cap and Iron Man's journeys. He needs to be on board for this showdown.

7. Jackson Is The Man

On a purely superficial note, Jackson is so much fun as Fury. He is a legend among men. And he wants to be in Civil War! He is the ultimate team player and anytime Jackson wants to be in a movie, Marvel should make it happen.