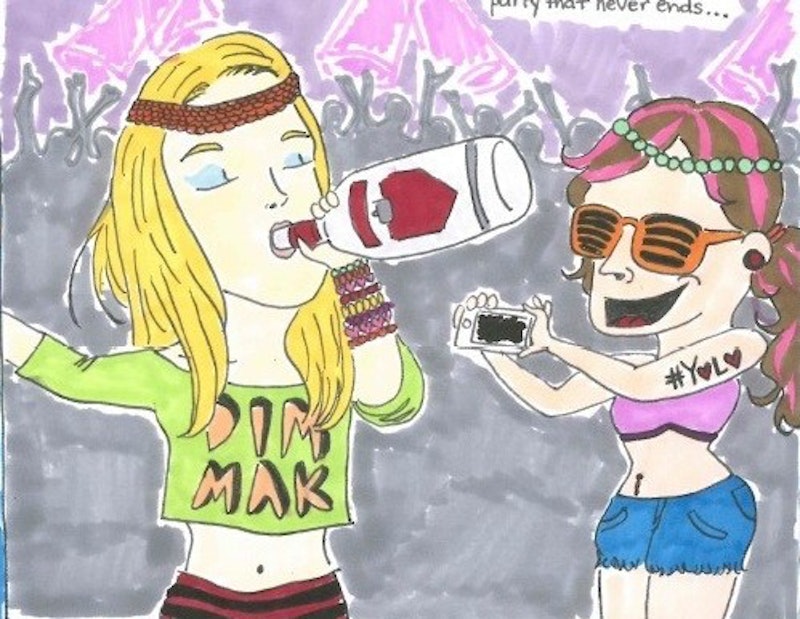 The world has changed a whole lot since the days of Ann M. Martin's ridiculously successful The Baby-sitters Club series. It was a huge deal for Claudia to have a phone in her bedroom, so there was no Internet to speak of for the most part, and certainly no cell phones. And as we all know, with modern technology comes changing issues. And lots of hashtags.

Last Night's Reading Tumblr's creator Kate Gavino, an artist and blogger, realized this and created 2014 Baby-sitters Club, a modern take on the series with illustrated covers of sample books. And basically, they're genius. Sure, the girls had to face diabetes, troublesome triplets, and crushes, but with Tinder, SnapChat, texting, and loads of other new things introduced into 2k14, the baby-sitters would have a lot of... distractions to contend with when running their business.

Check out below some of Gavino's amazing creations, and some more that I think definitely need to make an appearance in this updated series. #bscproblems, anyone?

Kristy, of course, is the founder and president of the Baby-sitters Club. It was her "great idea" that launched this whole endeavor and the hundreds of books to follow. Kristy is a jeans, T-shirt, and baseball hat tomboy, and she'd definitely keep that going into 2014. She's sporty and, yes, OK, kind of bossy, but that's part of her charm.

Because of this ambition, it's not surprising that Gavino sees her as über successful:

But that's just one of the books in the series, of course. There are others I could imagine:

The shy, quiet BSC secretary was never really a fan favorite (sorry Ann, I know she was based on you), and she doesn't even get a new 2014 cover, so I came up with three I think would fit right in:

I can't even deny that Claudia was the best. She had her vices, though, like junk food, that will escalate with all the new technology at her fingertips in 2014. I really believe Gavino is correct and she'll be a killer style blogger:

But in the name of these vices, there are a few more Claudia titles for the series:

Stacey was a pretty cool runner-up to Claudia, and this New York City girl taught all of us preteen girls what diabetes was. So it's no surprise that this cosmopolitan woman would find the rave scene in quiet Stoneybrook:

She's also all about style and brands, so there are a few more books I can imagine Stacey starring in:

Little Miss California was perfectly pegged by Gavino as being so into gluten-free food. This laid back sitter is all about chill living and sustainability:

Along those lines, you just know Dawn would totally star in these titles:

Poor Mallory. She always got the short end of the stick when it came to the BSC members. As it seems, in 2014, that trend continues:

Hopefully, the redheaded and bespeckled Mallory will find her way in the next decade. But for now, her books:

To be fair, mostly what I remember is that Jesse learns sign language and loves ballet. But maybe she can reach new heights with these book titles under her belt: