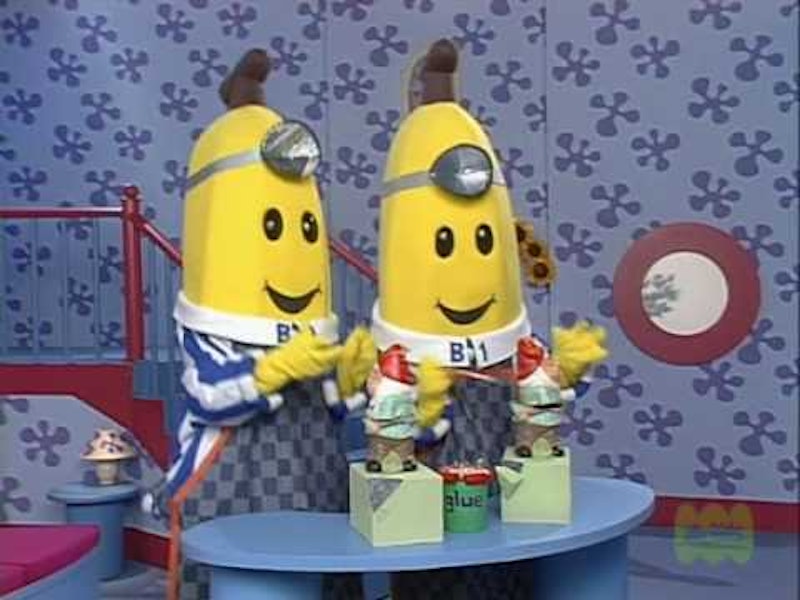 I've been living a lie for quite some time now. I hide behind a mask of the Super Cultured Grown-Up Shows I watch and live tweet about, like Scandal and Mad Men. "Look at me!" my tweets gasp. "MUCH SOPHISTICATED. SUCH TASTE. VERY CLASS." But alas, it is all a deep, decades long facade that I have kept up, hiding my dark truth: I was once obsessed with Bananas In Pajamas . Around the same time everyone my age revered the Spice Girls, I was worshipping at the altar of two barely animate fruits. Now you know my secret shame.

For all the time I spent watching the show, though, I have to confess that I don't remember all that much about it. Even the concept alone is enough to merit a "WTF" or two. I mean...I'm an imaginative person. I can suspend disbelief. Hell, I believed in Santa Claus until the fourth grade. But even I should have been wary of a show where twin brother bananas were chilling at the beach on the reg.

Alas, my 5-year-old self cared not for logic, and my parents cared not for questioning whatever stopped their four children from ripping each other's hair out in the back seat on road trips. My brain recycled all of my knowledge of the show since those days, probably for the sake of my mental sanity, but today all of its efforts will have been in vain. Today, internet, I re-watch Bananas In Pajamas as an adult. Brace yourself for all the thoughts that floated through my brain space:

Let's dissect this theme song for a second here, which, by the way, is curiously in cartoon format even though the rest of the show is live action. Are we really singing about bananas walking down the stairs and chasing bear cubs? How much crack would a person hypothetically have to wheeze before this became the premise of a children's show?

My little pre-kindergarten brain did not process the fact that all of these characters are clearly from the Land Down Under. So basically the same country that gave us The Wiggles. Everything is starting to make sense now.

My childhood heroes? Were full-grown adults in giant body suits. I'm surprised that shady Chuck E. Cheese costumed guy didn't make an appearance somewhere in this video, to be honest.

I happened to click on the birthday episode, because it was the most viewed on YouTube. (Like, over 4 million times. Are we all just super high right now? Do any of us have jobs?) I thought I might remember some of it, but oh my god, I'm remembering too much. Like, I tried to make those same stupid frosted banana biscuits like in the show, and yes, it was the day I discovered I had no artistic ability whatsoever and Monet's ghost wept for me, but it's still also kinda precious.

To be fair...their parents were bananas.

I sometimes kid myself into thinking I'm not going to rip into a dessert the immediate moment it is made available to me, but these bears have no such qualms. They follow their biscuit bliss. I didn't understand the kind of respect this merited as a kid, but now I fully and humbly appreciate their lifestyle.

Guys, these episodes were four minutes long. They baked biscuits, lost their seashells, found them, and then the credits rolled. Kinda makes you appreciate Dora The Explorer in a whole new light, doesn't it?

They say don't meet your heroes...but nobody ever said anything about eating them.