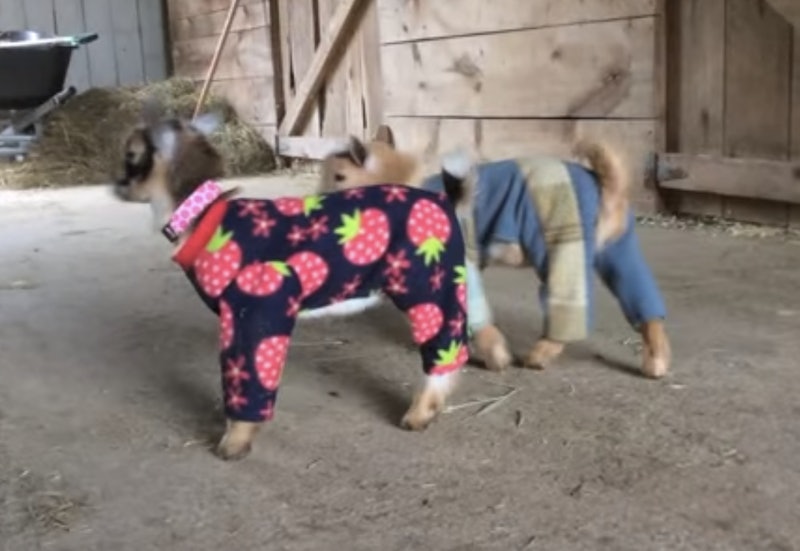 If you were also a '90s bb, then you probably thought the Bananas In Pajamas were hella impressive. It's been many moons since the last time I so much as stumbled upon the old VHS in the basement and I still know that theme song by heart. But I'm going to be secret jamming in stairwells to a different tune now that I've seen these baby goats in pajamas, because honestly, their pajama game is stronger than anything plant-based or living thing could hope to achieve.

And yeah, maybe these goats in pajamas don't sing children's songs, but they more than make up for it. They scamper. They leap. They worm their way into the one warm spot left in your cold, dark vessel of a heart like only a baby goat in pajamas can. I think I'm just going to stop wearing pajamas in deference to these two adorable PJ pals, because no amount of flannel is ever going to top the cuteness that they have already created. Their names are Winifred and Monty, by the way, so keep an eye out for them in the next JC Penney catalogue. It's clear that they have a long and healthy pajama modeling career ahead of them, and I am 100% behind it.

I don't know where you are right now (or maybe I do, and I'm lying to cover my tracks), but where I am, it is soggy and gross. So basically I've decided that there is no time like the present to assault your eyeballs with MOAR ANIMALS IN PAJAMAS. Enjoy this cute fest, courtesy of the internet:

Baby animals in pajamas: Saving the world one derpy outfit at a time.