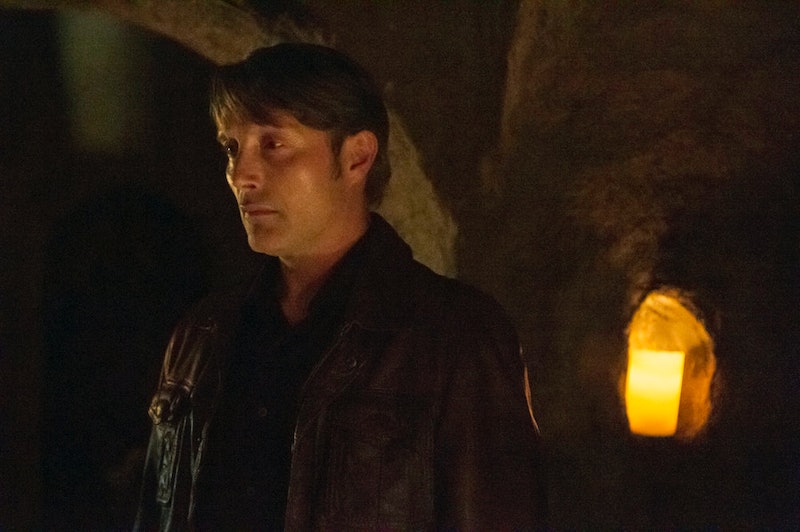 I think we can all agree that the Hannibal Season 3 premiere was chock-full of delicious twists and turns. Not only did we get an inside look at the budding marriage between Hannibal and Bedelia, but we also got a surprise cameo from a very familiar face. Antipasto" revealed that Zachary Quinto's Hannibal character, Neal Frank, was Bedelia's former patient. But not just any patient. The one that led her to quit psychiatry after he tried to strangle her and she killed him in the process. Well, we now finally have a face to match that description and that face is Quinto's, though, his cameo was so brief that if you blinked, you may have missed it.

During Bedelia's flashback to when she killed him (in a rather horrifying manner), we see a man's dead body laying on the ground. And, well, that's pretty much it. I mean, not to sound unappreciative or anything, but I thought nabbing an actor like Zachary Quinto would mean that his character got to do a bit more. Like breathe, for instance. All he did was play dead. Granted, it was a very convincing portrayal, given that the patient certainly looked to be deceased, there was no question in my mind. But is that the only appearance Quinto will make on NBC's thriller series? I'm happy to announce that will not be the case at all.

According to Quinto's IMDB page (which I realize isn't always the most reliable, but in this case I think we're pretty safe), the actor is scheduled to appear again in Episode 10 of Hannibal's third season, titled "…And the Woman Clothed with the Sun." No synopsis of the episode has been released yet, though I have a feeling it will involve another one of Bedelia's flashbacks, hopefully to a time prior to her patient's death.

I would love to see how Quinto would play his character's relationship with both Bedelia and Hannibal. He's proven to be an exceptional actor, especially in regards to the horror genre, having given two very memorable performances on both American Horror Story: Murder House and Asylum. (Plus, who could forget him as Heroes' big bad Sylar?) Quinto has earned the right to stretch his acting chops and deserves more than a few seconds of screen time playing a dead guy. So whether he's attacking Bedelia or going toe-to-toe (and quip-for-quip) with Dr. Lecter, let's give Quinto his due and allow him to dazzle (and terrify) us once again with his villainous talents. I just hope that this second course is much meatier than the first.

More like this
It’s Official: 'The Bachelorette' Is No Longer A Fairy Tale
By Samantha Allen
Josh Peck Shows Love To Jennette McCurdy After Her Shocking 'iCarly' Revelations
By Radhika Menon
At 14, D'Arcy Carden Was Sneaking Out To Parties & Crying Over Kurt Cobain
By Ivana Rihter
'Yellowjackets' Just Announced Who’s Playing Adult Van & It’s Perfect
By Gretchen Smail
Get Even More From Bustle — Sign Up For The Newsletter