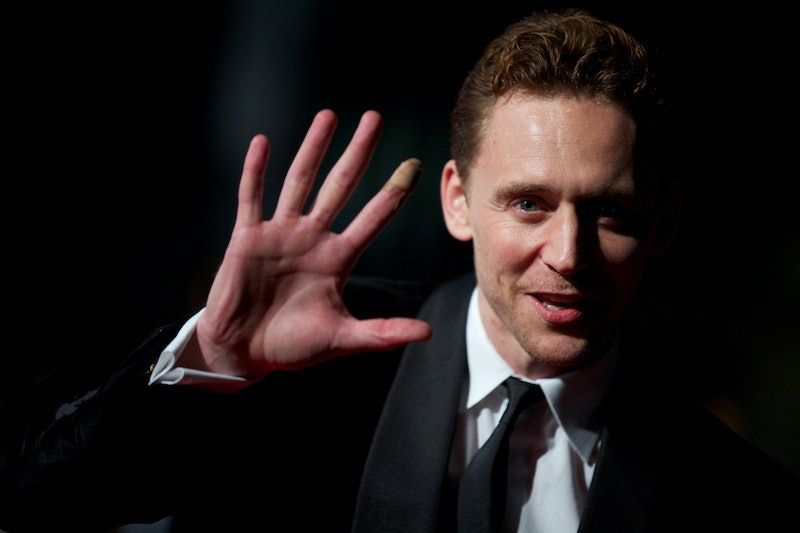 Even if you don't love The Avengers, or generally have a policy against fandoms, you have to admit, some celebrities are just better than others. It's not a democracy; it's a fame-ocracy. And one of those Better Thans is Tom Hiddleston, even though he would never, ever lay claim to this, since he's so humble and gracious and just generally adorable. Much of the Tom Hiddleston fanaticism is tied to his role as Loki in Marvel's Avengers franchise, the cunning, evil (but really, just misunderstood) brother of Thor (Chris Hemsworth). It was a shame that the spear-wielding Other Brother wasn't even in Avengers: Age Of Ultron! But I digress. And, like any swoon-worthy man, Hiddleston's quotes on dating and romance will make everyone melt.

It should come as no surprise that he's a romantic, too, and a lover and supporter of women. He was one of the first celebrity dudes to stand behind Emma Watson and her #HeForShe campaign, calling her "impeccable and extraordinary" on his Twitter — commence sighing, swooning, etc. in his general direction. And, even though, in interviews, the 34 year old Hiddleston is generally all smiles, an open book, and willing to talk about love at large, he will never admit whether or not he actually has a partner right now. (Though rumors are flying about Hiddleston and Elizabeth Olsen at the moment.)

Until there's confirmation, there's hope, so here are six quotes from Hiddleston that will make you wish he'd fall in love with you already.

1. He Knows How To Plan A Date

"I think, if you're going to be conventionally romantic, you've got to go all the way: a beautiful dinner somewhere lovely, with boat-loads of flowers, chocolates and champagne. But it might also be nice to wrap up warm and sit on a roof somewhere, with a cup of hot soup and your girl, watch the planes come in over London and listen to the night," he told Run Riot. Honestly, that's more sentimental than I personally would ever get. Good for him. I will accept all gifts with grace.

2. His Momma Raised Him Right

"I believe in the strength and intelligence and sensitivity of women. My mother, my sisters, [they] are strong. My mum is a strong woman and I love her for it," he told Elle UK. As you should! And no woman should love a man that doesn't admire and marvel at her strength.

Even in his youth, Hiddleston was most likely the boy all the girls at school wanted to kiss. And his girlfriends were so lucky, it was frightening. Here's what he told Russian site Kinopoisk:

I had a girlfriend at university, she studied French and Italian, we were dating for some time. And her study included living and working in Paris for 6 month. She asked me to go to Paris on weekend with her and help to settle down. I told her that I couldn’t because I had a very important audition which I couldn’t shift. To tell the truth my movie career was depended on this audition in that moment. I was told to come there on Saturday evening and if I hadn’t shown up I would have never got my hand near it. On Saturday I was on my way to the studio but I turned around in the last moment and went to King’s Cross, took the “Eurostar” and darted to Paris. Of course, I decided to come as a surprise and while riding I stayed connected with her friend. At last I was in Paris and by her friend’s tip off I found them in the Luxembourg Gardens where they were buying an ice cream…My girlfriend was standing in front of a stand with different flavours of ice cream and couldn’t decide which one to choose. I came, stood up behind her and gently whispered: “It’s a hard choice, isn’t it?” My deed was even too romantic as my girlfriend had almost fainted from fear.

I think I fainted just reading that story.

Good advice. We love you, Tom. Feel free to say it back to us at any time with any frequency.

5. His First Kiss Was Thrilling

Looks like Little Tom was a little bit precocious! He had his first French kiss before he even turned 11. Hiddleston told Elle UK: "First kiss at 10! Yes, 10 years old, tongues and everything. [Laughs] She was a huge crush, we were in the same class, a lot of note swapping, and eventually it all went down in a cricket pavilion on an autumn night. It was very thrilling." At least it was in the romantic setting of a "cricket pavilion," right?

Hiddleston told GQ that he was perfectly aware of the interest in his love life, but that he just didn't have much to tell (which I think is a total lie, but that is Hiddleston's prerogative). "I understand the curiosity. One day I hope when there's really something to write home about, then I'll be able to talk," he said.

I guess no news is good news, though, with Hiddleston — if he's not talking, it means he might still be single, and us normals might still have a chance.