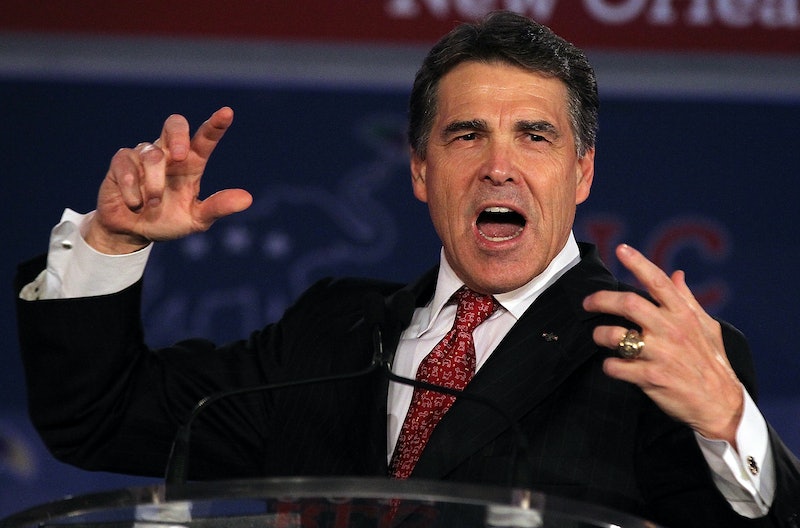 Former Texas Gov. Rick Perry has said many a-ridiculous things, and the issue of gay marriage is no exception. In fact, he had no problem laying it all out in his 2012 presidential run with that obnoxiously bad anti-gay "Strong" ad, which, funnily enough, had him wearing the same jacket used in the film Brokeback Mountain. Over the years, Rick Perry's views on gay marriage have largely been framed as a states rights issue, but it's been fun to watch the Republican flub his own stance a number of times.

Perry's most controversial comment about gay marriage definitely has to be when he compared homosexuality to alcoholism. During a San Francisco speech, the Republican was asked whether he though homosexuality was a disorder. His response?

I may have the genetic coding that I’m inclined to be an alcoholic, but I have the desire not to do that — and I look at the homosexual issue the same way.

He later defended his statement in a whirlwind of TV interviews by shifting the focus to whether or not gay marriage was a states' rights issue. After all, Perry has long been a staunch states defender, a trumpeter of the 10th Amendment, if you will, which says the federal government should only be afforded rights laid out by the Constitution.

But wait, does that mean Perry would be OK if another state legalized gay marriage? Maybe. In 2011, during a dinner in Aspen, Colorado, Perry made waves among religious conservatives when he said New York's legalization of gay marriage was "fine with me."

Our friends in New York six weeks ago passed a statute that said marriage can be between two people of the same sex. You know what? That's New York, and that's their business, and that's fine with me.

That lasted all about a week. Perry later ate his own words by saying he should have added some more, telling Family Research Council President Tony Perkins:

It's fine with me that a state is using their sovereign rights to decide an issue. Obviously gay marriage is not fine with me. My stance hasn't changed.

And then just this year, Perry appeared to be OK with a gay wedding if it was all in the family. When asked if he would attend a gay wedding of one of his family members, Perry said he "probably would." For a guy who "isn't afraid to admit he's a Christian," let's all take solace in knowing that having a gay relative wouldn't be the end-all for the Republican.